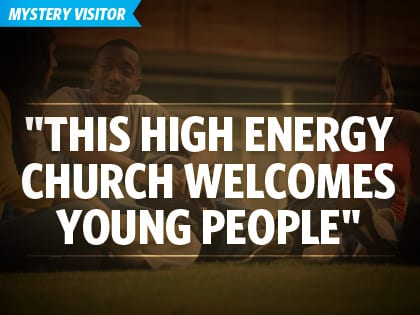 An unchurched person reports on an unannounced visit the 2014 Outreach 100 Fastest-Growing Church.

What was it like when you entered the building?
I felt welcomed by the greeters at the front door and in the sanctuary.
♦♦♦♦

Was it obvious where the children’s ministry was located and that it was clean, secure and well-staffed?
This high energy church welcomed young people. I easily found the children’s area with the plentiful amount of signs. If I had children, I would leave them there because the area was colorful. They had several separate classrooms for children of different ages.
♦♦♦♦

Did you observe anything that would lead you to believe that the church values diversity?
I saw a lot of Caucasian people. The church had no services in other languages, or even in sign language. They played one type of music, which I classified as Christian alternative. During the service, we were encouraged to bring a friend or another person with us.
♦

Describe the service.
I liked the contemporary music. The musicians were sincere, which appealed to everyone. Most people were engaged and sang along. However, I would suggest that the lyrics on the screen be made larger. I was not familiar with the songs and I struggled to keep up. After a general greeting from the pulpit, the speaker asked everyone to greet each other. The congregation greeted each other fine, but the announcements were a little too long. The 30-minute sermon on the importance of baptism was good. It was an easy concept to grasp and relevant to me because I think it’s important. He made the message enjoyable, and he was well prepared. I just wished he would have introduced himself. The only visual aids he used were Scriptures on the big screen.
♦♦♦

How Was the Post Service Atmosphere?
The hospitality of the church seemed high after the service, but again, no one greeted me. I felt lost in a sea of people and everyone seemed to know each other already.
♦♦♦♦♦

Would you return to the church?
I would visit again, but I would like to know more about what they believe before inviting friends. Teens and young adults would appreciate this type of church the most. I enjoyed the service, and it was easy to follow the message.
♦♦♦

Was the nearby community aware of the church?
I stopped at a local Chinese restaurant in the nearest shopping center after the service for an early lunch. I asked my cashier if she knew of the church and she said that she had. She was able to point me in the general direction, but said she didn’t know the exact direction.

How was the seating?
The seats were comfortable, and there were plenty to choose from. I liked the balcony. The congregation seemed fairly spread out, with tighter groups clustered together.

How clear was the church signage?
The outside signs pointed to separate entrances, including one to the children’s church. They had sufficient signage for worship times and directions, but I would have liked the signs to be larger. They had no signs about where to park or for guest parking. I was grateful for the people directing traffic. Signage for the sanctuary was fine, as was signage to the restrooms.

How would you rate the information resources?
They provided plenty of opportunities for me to leave my contact information. The website was easy to use. I can’t think of anything extra that I would like to see on the website because it was very helpful.

Overall, how friendly would you say the church was to you during your visit?
The church felt friendly enough. The one thing that bothered me was the police presence. Why were police outside directing traffic? Why were there so many officers inside? I counted four inside walking around. If you need police, they must be needed for something.

From Outreach Magazine  Know Thy Church

What was your overall impression?
Overall, I enjoyed this church. I would cool it a little on the police presence. I felt on edge around them because it felt like something bad was about to happen.