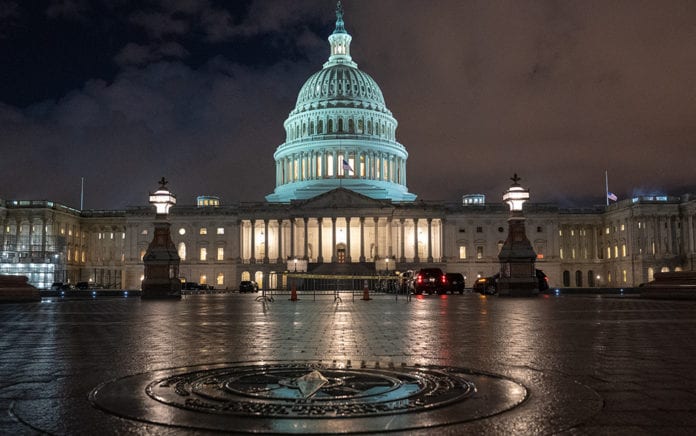 Churches around the nation are finding creative ways to reach out to people who have been impacted.

Starting on December 22, the United States began what is now the largest government shutdown in our nation’s history. It is still considered a partial shutdown because congress has voted in the appropriations for the departments of Veterans’ Affairs, Defense, Labor, Health and Human Services, and Education. However, more than 800,000 federal employees are either working without pay or have been furloughed without pay. Washington is divided and any resolution is uncertain. The shutdown could end at any time, or drag on for weeks.

In addition to workers directly affected by the shutdown, there are many more people who are indirectly being hit by it. This might be anyone from hotels near the National Parks to the waiter in the D.C. restaurant who is seeing fewer and fewer patrons. The shutdown is creating ripple effects in practically every community in the country.

Fortunately, churches all over the nation are stepping up to meet this challenge. Here are some stories from ministries that are reaching out with the love of Christ in this time of crisis.

Following the Example of the Early Church

Pastor Jeff Struecker knows what it’s like to be a government employee, having spent 22 years in federal service. He served in the U.S. Army as a ranger, and later as a chaplain. He currently serves as lead pastor at Calvary Baptist Church in Columbus, Georgia. “Our community is the adjacent community to Fort Benning, Georgia. It is by far the biggest employer in the larger community.” Everything that happens in the community is in some way influenced by this military base. That includes every church in the area.

Struecker saw that, as the shutdown progressed, many people were being impacted. Needless to say, going a month without a paycheck puts a great strain on many families. The church staff saw the need and decided it was time to act. They took up a special offering specifically to help people impacted by the shutdown. Struecker says that although the church gives through their denominational channels, they have never before taken up a special benevolence offering in the 10 years that he’s been there.

“We wanted to make sure that everyone came ready to give,” Struecker says. So their first step was to make an announcement on social media and they opened up their online giving platforms to receive a special offering. They let everyone know that Sunday, January 20, would be the designated time to give.

Struecker says that the congregation had been studying the book of Acts and it was a perfect way to put action to the words. “This is taking Acts 2:45 specifically and putting it into 2019, Chattahoochee Valley context. I think this is exactly what the first century church would have done,” he says. The result was that the special offering alone was 12 percent above their normal Sunday giving.

Using their social media and website, the church has created a form that people can fill out to help them identify specific needs. “We’re going to give away 100 percent of the money to the people who are directly impacted by the shutdown,” Struecker says. They are starting within their church, but the goal is to reach out to others outside their church as well.

Struecker points out that his church is only doing what he believes every church should do. “How you meet that obligation is going to be different for every church and in every community across America, but every church ought to be living that out.” He says it’s no different than any other town whose largest employer has begun to lay off workers. The church needs to be ready to help.

To find out more, or to see how Calvary connects to the impacted workers, check out the church’s website at CalvaryGA.com.

First Baptist Huntsville attracted a lot of national media attention when they gave away $16,500 in grocery store gift cards in a single 30-minute period to furloughed government employees, but Pastor Travis Collins stresses that their church isn’t exceptional.

Collins is the senior pastor of the church in Huntsville, Alabama. The town is home to NASA’s Marshall Space Flight Center and the Army’s Redstone Arsenal, and is a hub for governmental scientific research. “Probably half of the economy is dependent on the federal government,” Travis says. “Everybody from the pet store to the hotel is affected.”

Collins was on his way in to the office when he heard a news report about Chef Jose Andres who opened his restaurant to give free meals to federal employees. By the time he got in to church, he felt like their church needed to do something.

Within a few hours he got a call from a friend who works out at the Space Flight Center. He said that they were trying to pull together community organizations to support the furloughed workers and they needed a place to host it. Collins simply said, “Yes, of course.” He points out that the event was really not their idea. The church leadership simply thought they should do something to help.

Because they wanted to add something to the event, the church bought $16,500 worth of Publix gift cards. Collins says that they even made sure that the store would take them back because they didn’t expect to give them all away. The money came in part from some individual donations, but largely from the church’s disaster relief fund. The event was planned quickly and they didn’t even have a Sunday to build up for the event.

When the day came for the impacted workers to gather, Collins was blown away by the response. “Twenty minutes before we opened the doors, I stepped out of the large hall where we held the event and stepped into a throng of maybe 300 people huddled in a hallway. The sheer number of desperate people let me see that this is why we’re doing this.” He said it reminded him of those times when Jesus “saw the crowd.”

The church leaders began to give away the cards, and within 30 minutes every one of the cards was gone.

Collins is not completely sure how all the media attention began but he’s spoken with a dozen media outlets. “Maybe the good that comes from this is that the Church (capital C) is being painted in a better light than it’s normally being painted.” He encourages every church to get connected to their communities and do what they can do.

The attention that First Baptist Huntsville has received has led to more donations and they plan to continue the giving events. They are partnering with other local churches for the next events. You can connect with them at FBCHSV.org.

A church doesn’t have to exist in a large urban center close to government facilities to help furloughed workers. There are government employees spread all over the country, even in small communities like Elephant Butte, located just outside Truth or Consequences, New Mexico. This small town is built on a lake run by National Park Service workers who have not received a paycheck since the shutdown.

Bruce Morrison is the senior adults and missions pastor for the Church at the Butte. “We have a very small population of federal employees, maybe 20 people, but we are fortunate that the head of the Forest Service here is an active member of the church. That’s helped us to identify the people who might need help,” Morrison says.

The church, which averages 150–175 people each Sunday, already has an existing food pantry program. The staff sent letters to the furloughed workers and told them they can get a week’s worth of food each week as long as the government is shut down. Additionally, the church as offered to help with utility or rent assistance. “We also have church members who know federal employees,” Morrison says. “And they’ve helped out on their own.”

One particular family came to the pantry somewhat skeptical. “Is this real? Are you really going to give us food and not want anything?” They asked Morrison.

“That’s the way we operate here,” Morrison replied. “Just showing you the love of Christ.“

It touched them so much that they were interested in coming to Sunday services, but they didn’t have gas money. The church gave them a gas gift card and Morrison is pleased to say, “They’ve been to church the last two Sundays.”

Morrison points out that every church can do something. He understands that the church may not be able to pay every bill or meet every need, but “just the offer to help is encouraging to those who are struggling through this.” He says just knowing that someone cares might be one of the most import things to come from their church’s outreach.

Learn more about Church at the Butte’s efforts at ChurchAtTheButte.com.

National Community Church (NCC) holds 13 worship services each weekend in seven theaters and performance venues across Washington, D.C., and Northern Virginia. The church was started on Capitol Hill by Mark Batterson and his wife, Lora, with 19 people in 1996.

Lora Batterson is heading up their current relief efforts. “Our community consists of everyone from Hill staffers to entrepreneurs to government contractors to non-profit workers to people experiencing homelessness,” she says. “A large part of our church community is affected in some way by the shutdown.”

Batterson says that a core value for NCC is caring for those in need in the city and surrounding communities. “Our staff has been feeling a heavier burden for those impacted as each day has passed without a resolution, because that means mortgage and rent payments are coming up and bills are due in addition to the basics like groceries and everyday items that are becoming a drain.”

Like Struecker, they are using the example found in Acts 2 as their mandate. Using an existing online giving platform, they have created a “furlough fund” specifically to address needs during the shutdown. “People can donate to the fund to help. Or people can fill out a form if they want to receive assistance from the fund, matching need with resource,” she says. The online giving site is just beginning but the church staff is confident this will be a great blessing.

This is just a natural extension of what the church has always done. “We are just trying to be the hands and feet of Christ in our city in this season, like we try to do in every season,” Batterson says. She encourages all churches to take the step. “Start by talking to those who are negatively impacted by the furlough—including government employees and businesses that are affected by the lack of government employees working. Don’t assume the need. Get a feel for what they need, from spiritual support to financial support or just access to resources.”

To learn more about NCC’s efforts, check out their website at TheaterChurch.com and their furlough fund here.