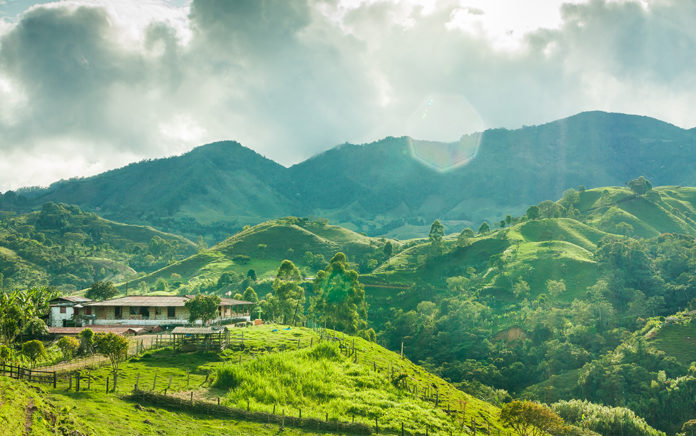 Endiro Coffee is a tree-to-cup operation whose committed and radical partnership with a coffee-farming village in Uganda has led to community transformation and gospel impact.

Many Christians the world over arguably have one thing in common besides Jesus: coffee. Yet how often do we think about where our coffee comes from?

The sad truth about coffee is that it is mired in a long history of injustice, poverty and exploitation—a history that continues to play out today. But people like Gloria Katusiime and Cody Lorance are at the front lines of what they see as an exciting missional opportunity.

Katusiime and Lorance co-own Endiro Coffee, a tree-to-cup operation whose committed and radical partnership with a coffee-farming village in Uganda has led to community transformation and gospel impact. In the midst of injustice and lostness, they are reflecting God’s heart of love and justice. It’s an excellent example of contextualized mission in action.

“The Coffee Bean Belt, where most of the world’s coffee is grown, has massive overlap with the 10/40 window, where most of the world’s unreached peoples live,” says Lorance. To be in the coffee industry is to rub elbows with poverty, disease, violence, trafficking and other forms of oppression. For the Christian, “proximity gives way to intentional presence, to incarnation and thus to strategic engagement and partnership for the sake of kingdom transformation.”1

What if coffee is the key to reaching these most vulnerable?

A PARTNERSHIP BORN FROM CAPE TOWN 2010

Gloria Katusiime met Cody Lorance at the 2010 Third Lausanne Congress on World Evangelization in Cape Town, where they discovered a shared passion not for coffee, but for contextualized mission among Nepalis. Katusiime, then a missionary in Nepal, reached out to Lorance, who was pastoring Nepali refugees in the Chicago area, after reading his papers written for the congress. By the end of the gathering, the two decided to follow Nepali tradition by adopting each other as unofficial siblings, sensing that the future may hold a partnership of some kind between them.

This partnership was not to be over Nepal, however. Katusiime returned to her home country of Uganda after Cape Town 2010, where she opened a coffee shop in Kampala the following year, a surprising but divinely orchestrated endeavor as she did not even like coffee at the time. Her real passion was using the coffee shop, which she called Endiro, to support orphans and young adults who had grown up as vulnerable children. According to UNICEF, 65% of Uganda’s children are categorized as “orphans or other vulnerable children.”2

The word endiro in Ugandan means “food basket.” Though each person might have their own plate, they gather around the endiro to partake communally of the main millet meal. If you want to give a priceless gift in Uganda, you give an endiro basket. It signifies community, fellowship and giving your very best. These are the values that Katusiime established from the very beginning.

Two years after Endiro opened, Lorance, who had been following along on Katusiime’s journey since Cape Town, took a trip to Ethiopia and Uganda as part of a much-needed sabbatical from ministry. He found himself in Katusiime’s coffee shop with plans to read a big book and relax. But through a few mishaps with his egg orders, he began to feel unexpectedly called toward Endiro. At the end of that day in Kampala, Katusiime and Lorance stayed up late talking about the possibilities of what could be. They wrote out a covenant on a piece of notebook paper, and from that moment on, Lorance was Katusiime’s partner.

Coffee is the number one export of Uganda, and the country ranks 8th for the most coffee produced globally. But in 2015, only 4% of the coffee produced in the country was considered fair trade.3 Even this tiny percentage of fair-trade coffee in Uganda was not actually fair, as Katusiime and Lorance soon realized. They discovered that middle men, called “coyotes,” were buying coffee from farmers at very low prices and then bringing that coffee to collection stations, taking the higher fair-trade price for themselves.

“We realized that most of the fair-trade coffee we were selling in our shops was actually exploiting people,” says Lorance.

This exploitation was not just current, but historical. As Lorance put it in a 2015 article, “Coffee has not only had a front row seat for some of the greatest injustices in history but the industry as a whole continues to do much to perpetuate the same systemic evils.”

He continues, “What is clear to me is that the best way to address injustices perpetuated or ignored by the coffee industry is to radically transform the way that business is done.”

Lorance and Katusiime began carefully rethinking every process and system within their business for the primary goal of restoring justice, applying their backgrounds in contextualized mission to ask the hard but essential question: What does gospel love look like in the Coffee Bean Belt?

The first thing they did was commit to buying coffee directly from a group of 200 coffee farmers, all women and most of them under the age of 30, in a village called Bukalasi. “We chose to work with women because in Uganda women are the primary breadwinners,” says Katusiime. “Statistically, these women put 90% of their income back into the community through spending it on things like housing and food, and for their children.”

Endiro pays 25 to 30% more than other coffee companies, making their farmers the highest paid coffee farmers in the country—a price Lorance and Katusiime say is simply fair for the hard work and superior beans. Over the years, they’ve also seen the total volume of coffee production dramatically increase, due in large part to improved sustainability practices such as introducing beehives into the farm’s biosphere.

The higher wages and improved production have raised the average household income from less than 100 USD to 600 USD a year. With the extra money, the farmers have been able to buy cows, build a medical clinic and start a school for children. Domestic violence has also gone down significantly. All this has helped drastically decrease child vulnerability in Bukalasi.

“I suppose Endiro could take credit for all this change. But actually, we are only paying them what is fair for all their hard work,” says Katusiime, emphasizing that the farmers are their partners and friends, not their charity project. Lorance mentions that each year the farmers and Endiro managers get together for a lively debate to determine the year’s coffee prices. Katusiime and Lorance talk about the farmers as if they’re talking about longtime friends—because they are.

“We want the farmers to experience generosity. They’ve experienced exploitation from the very beginning and get paid very little for what they do,” Katusiime continues. “God has called us to do things differently. When the farmers ask, ‘Why are you paying us higher prices?’ we say, ‘It’s what Jesus would do.’”

Not surprisingly, the gospel has grown organically in Bukalasi too. Many of the women in the cooperative are not only farmers, but evangelists who go to other villages to share the good news of Christ. “We didn’t tell them to do that,” says Lorance. “They just do it.”

To this day, Endiro uses its profits—even keeping executive-level salaries low—to partner with those working to end child vulnerability. Many of the employees at its 10 locations in Uganda are those who have grown up in vulnerable situations and have difficulty finding work elsewhere. In addition to Bukalasi, Endiro has more recently formed a partnership with a village called Mattaya, where similar transformation is taking place. They’ve also opened up a thriving location in Lorance’s hometown of Aurora, Illinois, through which many more are noticing, celebrating and joining in Endiro’s vision to end child vulnerability.

As it says on the back of every Endiro coffee bag, each time you take a sip of coffee made by Bukalasi farmers, “You have become a part of their transformation story. But they’ve also become a part of yours.” Coffee, bee hives, vulnerable children, farmers; Nepal, Cape Town, Bukalasi, Aurora, the kingdom of God—all these are vitally connected in Katusiime and Lorance’s story, a unique biosphere of contextualized mission in action. And all those who hear their story have become a part of that biosphere too.