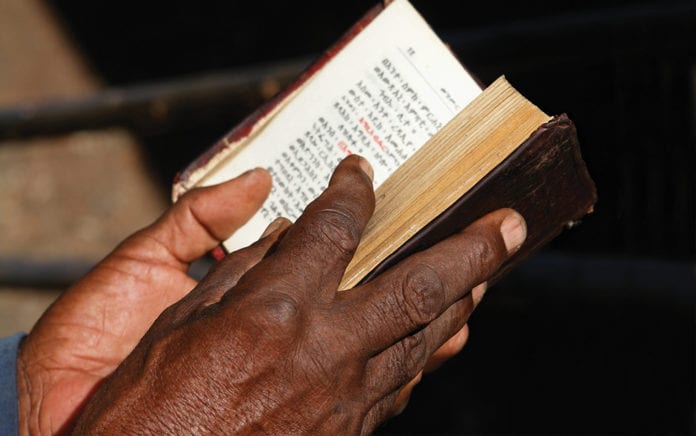 The church in Africa is mirroring the early church in innovative ways.

Over the last year, I’ve had the privilege of meeting and learning from a leader who’s modeling the discipleship principles I’ve devoted my life to. I’ll call him Joshua. (I can’t use his real name because he lives under threat of persecution for his faith.) Joshua is one of the key leaders in Africa who is following God’s call to multiply and mobilize disciple makers.

Exponential’s desire is to create multiplying churches where disciple making, mobilization and multiplication are so natural that they easily and quickly result in the viral expansion of God’s kingdom through groups, communities and nations. The problem is that there are few contemporary examples in North America. But we struck gold with our in-depth investigation of the movement in Africa that Joshua helps lead.

In the last 12 years, they have reached hundreds of thousands of previously unreached groups. They have clearly demonstrated the 3D model. Their people have been mobilized to serve God in every nook of society—expressing their calling as farmers, homemakers, teachers, doctors, lawyers and even members of parliament by being disciples who make disciples everywhere they go. This movement is literally changing the fabric of their society.

But I can’t emphasize enough that what Joshua and these leaders are doing is not what we would call strategic. Rather, it is simplicity, authenticity and spiritual power at work. Seeing this movement in action, I felt as if I were witnessing the living embodiment of the churches described in the book of Acts.

As my team and I talked to Joshua, we identified five key elements that express this simple-yet-effective disciple-making movement.

From Outreach Magazine  Making Disciples out of Christians

1. A COMMITMENT TO PRAYER AND FASTING

As a young leader, Joshua learned how God works powerfully through fasting and prayer. More than 1 million people join with the coalition of disciple-making movements like his in Africa for a commitment to fasting and prayer. The movement Joshua helps lead fasts and prays multiple times every week. Prayer and fasting are not only the starting place, but also the heart of the movement. In actuality, Joshua is leading a prayer movement that is focused on disciple making.

These Christ followers believe that learning to listen in both prayer and fasting is foundational. And they take seriously the words of Jesus in Luke 10:2: “The harvest is great but the workers are few. So, pray to the Lord who is in charge of the harvest, ask him to send more workers into his fields.”

It might be easy to miss this point, but it is important if we want disciple-making movements in North America. This new emphasis for both Discipleship.org and Exponential will shape our thinking and future programming.

Prayer also opens the door to another of the three foundational elements: mobilization. Prayer is key to mobilizing disciples to use their gifts to serve and show the love of Christ. These people use their vocations to help others experience the love of God through simple good deeds. Demonstrating compassion and kindness builds rapport and relationship—and a receptiveness to the message of God’s love.

However, Joshua is clear that they meet needs and show love regardless of the evangelism potential. It is part of being a disciple, even if no one responds. They simply pray that their service toward others will cause people to notice and give them the opportunity to share about Jesus. As Joshua says, “Our priority is to see that everyone has the Jesus option.”

Joshua shared incredible stories of how God opened doors for the Word of God through special people they call “persons of peace.” A person of peace is someone prepared by God who expresses a sincere spiritual interest, then serves as a bridge to relationships in a new community.

This person opens doors to a community and helps people listen to the gospel—because they trust this person. In this way, the gospel travels into the hearts of unreached men and women through a trusted conduit who is one of their own.

Once the disciple makers identify a person of peace who shows an openness, they offer a Discovery Group, which is a simple and life-changing exploration of Scripture.

The Bible teaches that faith comes through hearing the Word of God. Therefore, another key in discipling lost people is exposing them to Scripture. This movement has a simple, reproducible model called Discovery Groups that everyday people can easily use and pass on to others. Their structure helps us understand why they’re so effective:

It’s important to note the simplicity of both the groups and the process. This model of disciple making is practiced by everyday people for everyday people so that it can travel easily, from person to person, regardless of education or social setting.

The people in Joshua’s ministry have a passion to reach people who are far from God. To that end, they fast and pray a couple of times a week and live intentionally—doing whatever it takes to express the mission of God’s kingdom and reach lost people wherever they are.

Because it matters so much to them, they are constantly praying and working at it. But Joshua and other leaders insist on keeping it simple and decentralized. They prayerfully and intentionally reach out to people who do not follow Jesus by entering into relational networks, communities, groups, villages and cities. They repeat the process, starting with fasting and prayer; followed by serving and meeting needs, looking for persons of peace and setting up Discovery Groups. They are also highly committed to coaching, ensuring this simple process is repeated everywhere they go.

As we’ve learned about this movement, I have been deeply moved by the stories, examples and numbers of people whose lives are being transformed when God’s people fast and pray. Disciples in Africa are approaching and committing to prayer in the same radical ways the early church in Acts demonstrated.

And as Joshua shares what’s happening in his corner of the world with churches in the United States, we continue to hear of more leaders committing to these five elements.

In 2019, Exponential’s theme is Made for More: Mobilizing God’s People, God’s Way. All of the Exponential live gatherings will focus on the paradigm shifts needed to see the same caliber of mobilization we witnessed in Joshua’s movement. We are passionate about disciple-making movements that lead to multiplication movements. We dream of a day when everyday disciples are mobilized into everyday mission fields where they work, live, study and play to make disciples.

For information, go to Exponential.org.