Home Features Mexico: What We Can Learn From This Expanding Church 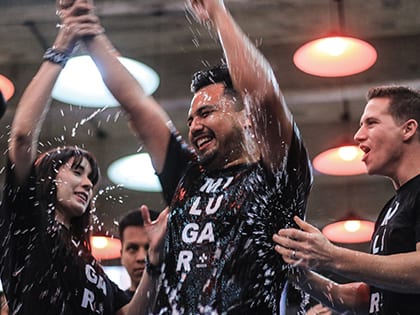 More Life Church (Iglesia Más Vida) is extending its influence throughout Mexico and beyond, primarily through volunteers.

“It surprises most U.S. pastors that we’re able to do so much at a fraction of a typical U.S. church budget,” says Andrés Spyker. Since 2005 he has served as pastor of More Life Church (Iglesia Más Vida), based 100 miles west of Mexico City. The church, founded by his parents, has now grown to 11,000 worshippers across eight campuses, many in economically challenged areas.

“We try to run a lean, mean machine about costs,” he says. “One big area where we save is by the use of key volunteers to oversee major ministries.”

The church’s vision is a big one: “Make disciples of Jesus in the nations by building an influential, Christ-centered, Bible-based church that transforms mentalities and equips people to lead and impact in every sphere of life.”

Everyone who attends learns that this church is planning a future presence throughout Mexico and other nations. It’s one thing to articulate a great vision, but how do they plan to pull it off?

Spyker is a third-generation pastor, and his parents and grandparents also were church planters, launching many new congregations across Mexico. He brings that mindset to More Life Church.

“My dad constantly modeled the idea that we don’t have to wait on money to do what God has called us to do,” Spyker says. “My faith grew as a child and young adult as I saw many ways that God provides money and people out of the blue.”

Financially, the working premise is to make each new campus self-sufficient from the start. Spyker’s practice is to gather a special offering at the beginning of each year. “We call it First Fruits, and it gives us a bump,” he says. “We’ll take a portion of it to start a new campus.”

This offering covers the essential start-up costs, but personnel salaries initially are borrowed. For several months before a campus is launched, a staff member from the original campus will commute back and forth, starting small groups and other meetings in homes or in a low-cost rental.

Over these months, the size of the core group grows. Volunteer lay leaders receive teaching. “By the time we launch, we have enough people, including enough tithers, to cover our basic costs,” he says. “So we scale the level of ministry and the amount of staffing we hire according to the local giving.”

“I don’t think we recruit more volunteers than other churches,” Spyker observes. “Where we might differ is in developing key leader volunteers. That means we’ll have a volunteer running big ministries—worship leading, worship production, small groups and discipleship program.” Even the head of the church’s volunteer ministry is a volunteer couple, overseeing hundreds of people.

Financially, this strategy makes a big difference. “We lean heavily on high-capacity volunteers,” explains Spyker. “Then our staff becomes a support team to these high-capacity leaders.”

The result is buy-in to ministry at a very high level. “They see firsthand as deep life change happens in families and individuals. They see ministry at a level akin to the book of Acts.”

The preaching comes 70 to 80 percent by video from the original campus. The remaining services feature preaching either from the local campus pastor or a rotation of the main campus’ preaching team coming in person, including Spyker’s father, Juan.

This approach opens the door for more personal development. “Sometimes our campus pastors are good communicators, but not great preachers,” says Spyker. “This provides them a platform to learn and grow.”

Mexico has 32 states, including the federal district, so Spyker initially wants the development of the church to expand to 32 campuses. “If I can get a campus in a major city in each of the 32 states, if it’s relevant and healthy, then it can plant in smaller cities,” he explains. “I want them to ‘own’ their state, to have passion to fill their state with the gospel.”

The vision doesn’t stop there. “Much work is needed to take the gospel everywhere, from urban centers to rural areas as well,” he says.

Not only does the church have no debt, but its finances are in Mexican pecos. No subsidies come from the U.S. or elsewhere. “What a testament to God of his faithfulness,” Spyker says.

The church’s financial blessing goes even beyond the borders of Mexico. According to Spyker, “One of the core foundations of our church is that even though we started decades ago as a mission field, we have wanted to become a missionary-sending church. So over the years we’ve sent missionaries to different countries. Now we financially support missions and missionaries monthly in different parts of the world. I believe this is one of the reasons God has blessed us.”