Home Features Stepping Into the Small Opportunities in Others’ Lives 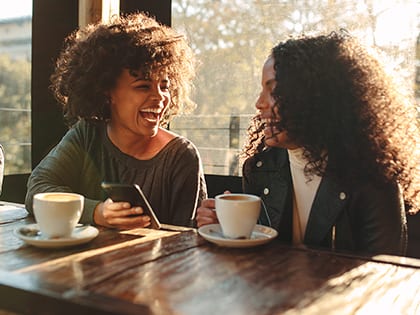 If we keep our eyes up, God can use us in the mundane moments of life to change someone’s eternity.

With arms crossed and eyebrows furrowed, customers in the Verizon store stood waiting and watching for their name to come across the ‘next-to-be-served’ screen hanging overhead. Getting a new phone is an exciting day for many Americans, and even though the in-store experience is often more like the post office or DMV, we endure the long waits and confusing contracts for that glimmering new phone.

I believe our God shows up in the small stuff of life—in traffic jams and bad service at restaurants; God is in power outages, basement floods and emergency trips to the vet for the family dog. God shows up in the mundane and inconvenient places of life. God is in the small good stuff of life too—in the smell of elephant ears at amusement parks, in slow strolls on the beach or woods and in the roar of the crowd at a baseball game.

There is something special, however, in the inconvenient places, the frustrating places—the places of furrowed brows like the Verizon store. In these places, if we would raise our expectations instead of folding our arms with the rest of the world, I believe we would see God at work. Here’s how we can join God in the small stuff of life:

Recognizing the Open Door in Front of You

“Moore,” shouted Aaron. “Here!” I immediately responded, raising my hand like a nervous schoolboy. My Verizon rep was winsome and talkative and immediately took my mind off of the fact that I had just waited for over 30 minutes. I immediately felt like I was the center of his world. He paid attention to me, asked great questions and listened with his eyes. He was great! As we discussed my contractual options and my device preferences, Aaron tapped away on his tablet, punching numbers and dates into forms before whizzing his device around for me to sign the next two years of my life away with a swipe of my finger.

As we stood setting up my new, shiny phone, Aaron began to talk about his life. He told me about his girlfriend, their first unexpected child which was due in a month and his apprehension of being a first-time dad. There it was, blinking brighter than my name on the next-to-be-served monitor—God showing up in the small stuff of life! You see, in the small stuff of life, God almost always makes a clear invitation for us to connect with people in their story—their hopes and fears, their dreams and desires, and their apprehensions. These are all touch points where God works through us if we are ready to be used. The work of evangelism is mostly about recognizing these opportunities and having the courage to step into their story with the hope of Jesus.

Responding to the Small Stuff

From Outreach Magazine  How to Approach Short-Term Trips in 2021

Aaron’s honesty surprised me but I chose to respond to it by pressing, “You know, it is all right not to have all the answers. Life is complicated and you learn along the way,” I added. “What I do know, Aaron, is that all the answers you need have to come out of your own relationship with your Heavenly Father. Being a good father comes from knowing your Father—does this make sense?” I asked.

Aaron responded with even more surprising honesty. “It is really funny you came in today. I haven’t thought about God in years until this week as I’ve been thinking about my baby. I even prayed and then you came in!”

Aaron represents most people. God is at work in people’s lives, using their circumstances to draw them to himself. Watching, waiting, listening and then acting with courage to step into people’s stories is what evangelism is all about. Entering into a person’s story starts when we take a step of courage, capitalizing on the obvious touch points where their lives connect with God’s activity. God’s invitation to us is often brighter than our names blinking on the ‘next-in-line’ monitor.

When we have an expectation that God is in the small stuff, we find that God routinely opens doors for us to step into people’s stories. Stepping into a moment in a person’s story can be life-changing but we need to realize there is a bigger picture.

As Aaron continued to share, I continued to respond—sharing more and more of the gospel story. The Verizon lobby, however, became louder, with more furrowed brows fixed on Aaron’s overly generous assistance with me, so I ended our conversation by saying, “I don’t think it is a coincidence that you prayed and now we’ve met and talked.” I continued, “I think God is in this, inviting you into his story, Aaron.” Aaron agreed as he stooped behind the counter and I led him in prayer. I had him pray to invite God into his story, to trust in Jesus’ death and resurrection and ask God to begin to lead him in the right direction.

Roaming With Those on a Journey

Many of us remember the days before unlimited talk and text. There was something called a “roaming” fee for cell phone use. These were fees that were charged when making calls while you were outside your network. They were painful, unpredictable and costly.

From Outreach Magazine  Reviving Evangelism for the Next Generation

Journeying with people can be exactly that but we need to “roam” with them, to be with them in the small stuff and help guide them as God is at work in their story. Over the course of the next several weeks, I had multiple meetings with Aaron. During one of these meetings, he said, “You know, ever since you came into the store the first time, my life has gotten much worse—I can’t sleep at night; I’m having horrible, vivid dreams; my relationship is on the rocks and I have even more fear and anxiety about the future.”

I responded, “Great! Then it’s working!” Confused, Aaron asked what I meant. I explained, “You see, when we invite God into our story, things don’t usually get better—they get harder, more painful, more real. God loves us too much to come into our lives and leave us in the mess we’ve grown accustomed to. He begins to clean things up, changes things—changing us! You see, Aaron,” I continued. “God is at work in powerful ways, and while you can’t see the big picture, God does, and what he is doing is going to bless you and your family in the end. You see, God is in the big and small stuff, and he is guiding you.”

Aaron agreed, committing to more prayer, Bible reading and counsel. Aaron was on his way to a new story, a better story. God was always in the small stuff of his life but now God is in the story, working for the good of Aaron, his girlfriend and the precious child that started this new chapter in his life in the first place!

R. York Moore (@yorkmoore) is a speaker, revivalist and abolitionist. He serves as National Evangelist for InterVarsity Christian Fellowship USA. York became a Christian from atheism while studying philosophy at the University of Michigan. He also has an M.A. in Global Leadership from Fuller Seminary. York is the author of several books including his most recent release, Do Something Beautiful (Moody Publishers 2018).