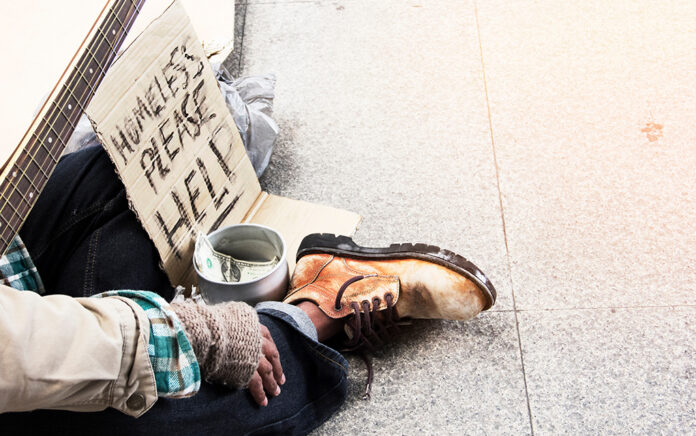 The people in need around us are deeply loved by God

In recent months, a man began standing at the top of the interstate off-ramp near my home with a small, cardboard sign asking for money.

His name is Darren.

I know this because I asked him. I passed him too many times to ignore him. He seemed there to stay, so I rolled down my window one day and gave him some money. I had seen him picking up trash along the road, so when I gave him the bill I said, “Thanks for picking up trash.”

After that day, that area remains impeccably clean.

Since then, we have always addressed each other by name.

A few weeks later, when my car went past him and I rolled my window down to ask him how he was doing, he said: “I hurt my finger. I need a cast or something. It hurts. Bad. Can you help me?” He held out the badly bent finger. The light had turned green, and I had to start pulling away, but he followed my car, trotting along, saying, “It hurts, can you help me?”

I shouted as I had to begin to accelerate, “I’ll be back!”

I’m sure he didn’t believe me. I’m not sure I believed me. My wife, Susan, was with me. I had told her about Darren, but this was the first time she had met him. I asked her: “Are you okay if I take care of this? I’m starting to have something of a relationship with him.”

I went to a nearby CVS and got a hurt-finger repair kit (I was pleasantly surprised they exist) and a small bottle of Tylenol, along with a bottle of water. I went back to where he had been begging, but he wasn’t there. I suspected that back in the trees nearby he had to have a tent or some kind of shelter, so I pulled my car off to the side of the road, leaving Susan in the car, and went looking. There I found a tent, and it looked exactly like one of the tents that Meck had given out to the homeless community during the heart of the pandemic.

He came out of the tent and met me warmly, and I gave him the plastic bag holding the care kit for his finger and the pain medication. I told him what was inside and what little I knew about how to use it, and he thanked me over and over and told me I was a good man.

I knew I wasn’t. I’m deeply sinful and in need of a Savior. But I could see how he felt that anyone who cared about him was “good.”

A day or two later my car, Darren and the off-ramp stoplight timing coincided again. I rolled down my window and asked how he was doing. He said, “Thank you, my finger is so much better.”

Another day or two later, our paths crossed again at the stoplight. I rolled down my window and asked, “Hey, Darren, how are you?” and held out a bill. He came over and said, “No, no, you’ve done too much.”

A homeless man begging on the streets turning down money because he felt undeserving. My heart broke.

And then he asked: “Is it supposed to storm tonight? It stormed the other day, and it was rough.”

I thought to myself, He has no access to weather reports. He lives in a tent. The storm he was alluding to was vicious and could only have been frightening to endure living in a tent—not even knowing it was coming.

I told him, “Yes, there is one coming, and it’s going to be bad, but not until tomorrow.”

He said: “Thank you. I believe you.” Apparently, information from others who had not tried to care for him was not trusted.

Why do I tell you this story? I wish I could say that I do this often—befriend the homeless, go out of my way to get to know them and care for them. But the truth is, I don’t. But the Holy Spirit prompted me to stop and talk with Darren, and I can honestly say that I’m glad I did, and I hope to do it more often.

Neither you, nor I, can tackle the homeless population of the world. But we can each try our best to make a difference where we can. That’s what I’m trying to do with Darren. Because it’s important to remember that he has a name, a life and a story. He matters deeply to God. And he matters to me.

From Outreach Magazine  5 Things We Owe Every Pastor's Wife