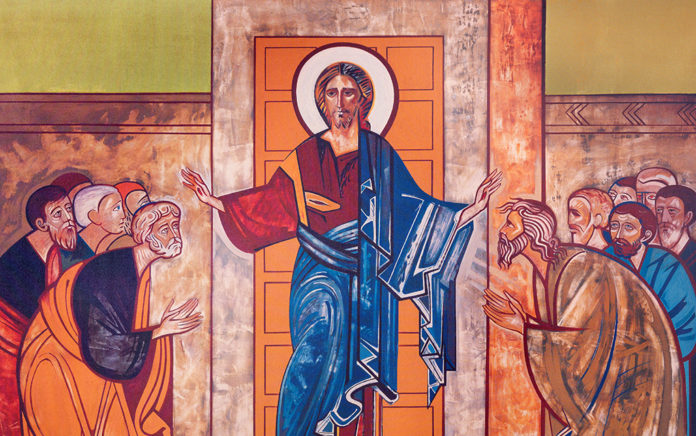 The significance of Jesus’ sermon illustrations

In a sermon many years ago, my husband Kyle, as he often does when he’s preaching, used an illustration to communicate a biblical truth. Unfortunately for me, he used a story about my inability to perfect a pecan pie (his favorite dessert) as the illustration. That particular Sunday, I was serving in the nursery, and as parents came to pick up their children, I became deeply confused as to why so many were offering me their favorite pecan pie recipe. After a few of these offers, it dawned on me that Kyle had probably said something about my recent attempts at baking in the sermon, and if there is anything congregants remember about the pastor’s teaching, it’s always the sermon illustration.

Jesus used sermon illustrations, too. In the gospel of Matthew, Jesus asked his listeners to understand an intangible reality they couldn’t see with their physical eyes—the kingdom of God. He knew they could only engage this reality with the eyes of their hearts, so he chose to use stories—what we commonly call parables—to illustrate his meaning.

A parable is an allegorical story designed to illustrate or teach a truth, often making use of concrete objects as the symbolic representation of an abstract meaning. For example, Jesus used small objects that are often tucked away—seeds in the soil, a pearl inside an oyster, a treasure buried underground—to describe how the message of the gospel is implanted in the hearts of those who bow in allegiance to him. Later in his ministry, he spoke of leaven causing bread to rise and full grown trees birthed from seeds to describe how that truth grows and bears fruit in the hearts of his followers.

Jesus used so many parables in his teaching that it begs the question: Why did Jesus choose to communicate in this way? Why didn’t he speak forthrightly to the crowds that gathered around him?

1. Parables Confirm Who Are True Hearers and Who Aren’t.

Jesus’ very own disciples seemed confused about his use of parables, because they asked him about it in Matthew 13:10. Jesus answered them:

“To you it has been given to know the secrets of the kingdom of heaven, but to them it has not been given … This is why I speak to them in parables, because seeing they do not see, and hearing they do not hear, nor do they understand … But blessed are your eyes, for they see, and your ears, for they hear.” —Matthew 13:11, 13, 16

Jesus often concluded his parables by saying, “He who has ears, let him hear” (Matt. 13:9). The ears he referred to are the ears of the heart, and to hear with these ears means to understand and respond to the deeper meaning in the story. According to Jesus, the disciples understood the spiritual meaning in the parables, but many in the crowds did not. The crowds, he said, referencing Isaiah 6:9–10, didn’t want to understand:

Just as the people stubbornly refused to accept Isaiah’s proclamations about God, Jesus said the crowds in his day were similarly at fault. They didn’t desire the truth, so it was “hidden” from them in parables. The disciples, on the other hand, had seen and believed, heard and understood—a gift from God, in that he had opened up their spiritual eyes and given them sight. They believed Jesus was the Messiah, and upon this truth each disciple would grow or, as Jesus said, “He will have abundance” (Matt 13:12).

“All these things Jesus said to the crowds in parables; indeed, he said nothing to them without a parable. This was to fulfill what was spoken by the prophet: ‘I will open my mouth in parables; I will utter what has been hidden since the foundation of the world.’”

Often called a “bridge book” because it connects Old Testament prophecies and promises regarding the Messiah to Jesus Christ, Matthew similarly connects Jesus’ use of parables with the fulfillment of prophecy. In other words, Jesus’ communication style was one sign among many that he was the long-awaited Messiah.

Jesus’ task was to communicate his message in a way that would extend the invitation into God’s kingdom across cultures, eras, generations and languages for centuries. Much like a child’s picture book, he used word pictures involving common, everyday objects—salt, light, bread, sheep, seeds—and common human experiences—work, weddings and laboring to give birth—to illustrate intangible truths. Because he used parables, he allows anyone who wants to be a true “hearer” to understand and enter God’s kingdom, no matter their language or culture.

From Outreach Magazine  How the 'Gig Economy' Is Changing Christian Ministry

4. Parables Compel the Listener to Enter the Story.

As listeners, we engage differently with facts than with stories. Factual information engages the mind, but it often keeps the intangible from becoming tangible and memorable. We can’t feel, imagine, or engage at the heart level with facts the way we can with stories. Stories add nuance and color to truth in a way that sticks with us long after we’ve heard them.

Jesus masterfully awakened his listeners’ imaginations and emotions through his use of parables. In other words, he engaged the ears of the heart, calling people to come alive to intangible realities of the kingdom of God. And when the heart is engaged, the listener enters the story, becoming a character themselves. For example, in sharing the parable of the prodigal son, Jesus asked us to step into the shoes and perspectives of multiple symbolic characters: the father, the prodigal son and the older brother. By entering the story, we learn the character and nature of our gracious God. And we’re instantly aware of whether or not we’re the prodigal son or the older brother and how we must respond.

Because we’ve entered the story, we then remember it. In an oral culture such as Jesus’, this would have been especially important in his message going forth. But it’s also important for us, his modern day listeners. Just like my fellow church members remembered the pecan pie illustration long after Kyle’s sermon ended, Jesus’ parables are a gift to us as we seek to understand intangible realities of the kingdom. They take gospel truths and create a deeper, more memorable imprint.

Have you heard about my new study, Seek First the Kingdom? Order your copy or see a free sample today at lifeway.com/seekfirst.

This article originally appeared on LifewayWomen.com and is reposted here by permission.