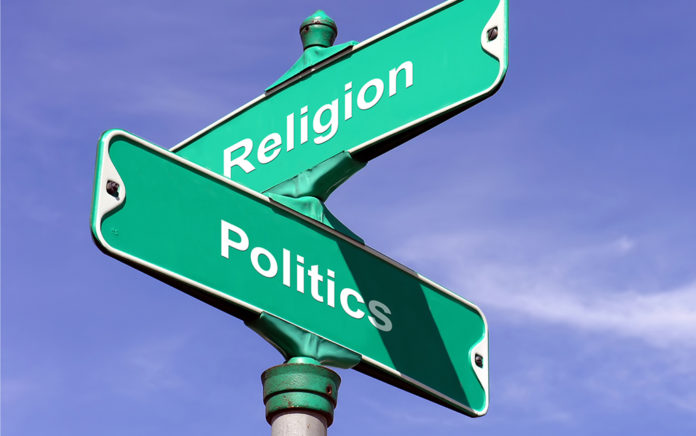 Are your political views and convictions growing in intensity? Are you finding yourself feeling angrier than you used to be about a variety of political issues? Are people in your extended family, community or church becoming angrier? In addition to being in the midst of a global pandemic, widespread demonstrations about racial injustices, and an […]

Are your political views and convictions growing in intensity? Are you finding yourself feeling angrier than you used to be about a variety of political issues? Are people in your extended family, community or church becoming angrier?

In addition to being in the midst of a global pandemic, widespread demonstrations about racial injustices, and an election year, we live in a media saturated environment where hate and division trigger wider viewership, larger ratings and significantly higher advertising revenue.

In such an environment, how can we as individual Christians, or as pastors or ministry leaders tasked with leading others, know when we are getting sidetracked, especially when “believing you’re right and that others are wrong” triggers intense and addictive feelings?

Media outlets on both the left and right are using language and tactics to inflame anger, alienate and disparage whomever “the other” might be and, as a result, there are growing levels of disrespect and hatred towards people who hold different political views.

As followers of Christ who are engaging in this process, are we starting to cross a line that shouldn’t be crossed? And, if we are, how can we know when this is happening, and what are the costs?

Idolatry comes in all shapes and sizes. It is not limited to people who put a metal or wooden statue on an altar and light incense to it. Although this happens in many parts of the world, idolatry is a deeper issue. Here are a few questions to discern if it is at work in our hearts.

Who or what am I trusting to provide for my future?

People enter into idolatry because they feel the need for safety and security. Life can be hard and even if we are experiencing good times, there is a sense that we do not want them to end.

It doesn’t take much to realize how truly fragile, vulnerable, and powerless we are in this world. The pandemic alone, with all its recent economic ripple effects, has made this painfully clear even for many who thought they could control their destinies.

Political idolatry happens when we begin fixating on what a human leader or political party can do for us more than we focus our eyes on our Heavenly Father, our true provider who calls us to trust him and not worry (Matt. 6:25–34).

How am I treating people who disagree with me?

We can also tell if we have moved into political idolatry by how we treat people with different opinions, be they on the left or right of the political spectrum. All human beings, despite their political views or political affiliations, are made in God’s image (Gen. 1:26–28).

When we interact with “those people” who see political and social issues so differently, do we treat them with dignity and honor the way we would treat Jesus? Are we treating them with kindness so we bear the image of our Heavenly Father (Matt. 5:43–48)?

Where is my loyalty being placed?

The next logical step in discerning if we are letting our political views become idols is by looking at the loyalty and allegiance question. When faced with a choice between what political pundits and political leaders are asking us to do, and what Scripture asks of us as followers of Christ, which actions do we take?

For example, God is going to judge us for how we speak about people, and for the names we call them (Matt. 5:21–24). Do we take our cues from political leaders and fear them, or do we fear God, the one who deserves our ultimate allegiance (Luke 12:2–5)?

Sometimes, we might make light of these things and rationalize why it is OK to choose political rhetoric and divisive behavior over behaviors and attitudes God calls us to in Scripture. Perhaps it is spiritual warfare that is causing us to not step back and assess the broader impact of political idolatry, for it comes at a great cost (1 John 2:1–11).

Political idolatry forms in us a different core identity, and from that a very different “likeness” emerges. Discipleship becomes distorted as we say that we are Christians but attitudes, words and behaviors begin resembling the messaging of politicians and pundits on the right or the left more than our risen Lord.

The distorted discipleship then leads to a marred witness. Rather than seeing Christians who have hope in a God with ultimate power and authority, who is ushering in an eternal kingdom, they see people rallying around political figures and behaving in ways that seem at times to be wholly contradictory to how their Bible, that they say informs and guides their lives, is telling them to live and treat people in the world.

Jesus taught his followers that people would know we are Christians by our love (John 13:34–35), but political idolatry frequently holds opposing values. People begin thinking it is fine to hate, malign, publicly embarrass, ridicule and even bully those with different political views.

From Outreach Magazine  7 Indications That Your Vision Is Building Momentum

So, at a time when a broken world needs the witness of Christ more than ever, political idolatry clouds and disfigures this witness, and the end result is far fewer people believe that the gospel is true or good news at all.

And out of distorted discipleship and marred witness, horrific things can happen in society. Walk the path of Auschwitz and you will never be the same, wondering how the place that was the hub of Western theology in its day could spawn such unfathomable horror.

How in the world could Christians commit intense violence against innocent people, merely because they were different? It happens when people substitute teachings of Jesus for political ideologies.

Some might say that is just an extreme case. Yet we saw it in Rwanda as well, and at that time their nation was dubbed the “most Christian” of all countries. It happened in Sarajevo and refugees said, “We never thought it could happen here. We were so educated.”

However, extreme violence did happen, because professing Christians chose political idolatry over loyalty to the teachings of Christ. And brokenness in our own society continues as the remnants of slavery and segregation, political positions once vehemently supported by many Christians, result in people of color still regularly having to navigate discrimination in a variety of forms.

GOD DESERVES BETTER FROM US

In the midst of a global pandemic, protests, and economic turmoil, Christianity proclaims that it has “good news” to share with the world. The Lamb of God, through his sacrificial work on the cross, took away divisions among people where hatred and prejudice had separated them for generations.

Through his blood, he reconciled Jews and Gentiles (Eph. 2:11–22), he destroyed economic and racial barriers (1 Cor. 12:13), gender barriers (Gal. 3:28), and other seemingly irreconcilable cultural differences (Col. 3:10–12). The first chapter of Colossians proclaims that Jesus reconciled to himself all things, whether things on earth or things in heaven, by making peace through his blood, shed on the cross.

It is because of all that God has done for us through the blood of Christ that he deserves to have no other idols before him. These are not harmless political games that are being played. This is deadly serious.

The world needs the church, and every person within it, to set aside political idolatry so people can see our Risen Lord. It doesn’t mean that we don’t engage in political processes and seek to influence our societies. It does mean we keep Christ and his teachings first and foremost as we do this.