Home Features The Story of the Bible Told Through Water 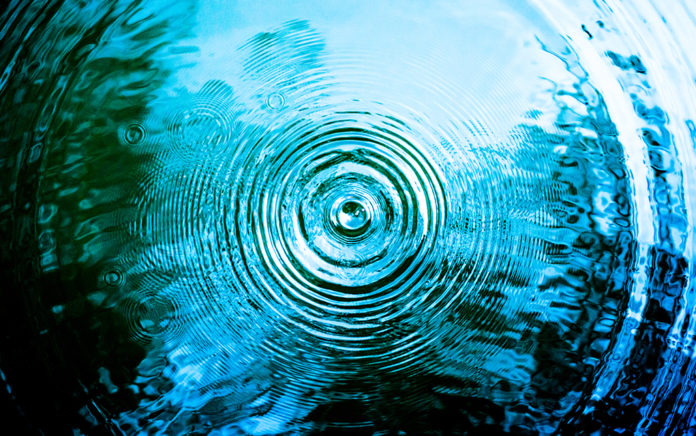 Water plays a prominent role in the saga of the Scriptures.

The stuff of earth is the stuff of life—and also the stuff of the biblical story. Trees, mountains, water and food all figure prominently in the slowly unfolding drama of the holy Scriptures. Now the fact is, there are lots of prisms for viewing the storyline of the Bible, many built from big theological concepts like covenant and kingdom. But it’s also possible to overtheorize the Bible, turning it into a collection of abstractions. But the Bible itself doesn’t do this. The Bible keeps its story close to the ground, making sure we remember it’s fundamentally a down-to-earth saga.

So, following the lead of the Scriptures themselves, we want to give you some takes on the big story from the perspective of four earthly elements of redemption. These windows into the Bible’s narrative of renewal are all the stuff of life. We’ve already looked at the story of trees and mountains. Today we’re diving into the deeps, to see how the Bible’s drama flows like an unstoppable river toward the ocean of God’s redemption. In the next and final entry, we’ll explore how the bread of heaven nourishes this narrative.

A SACRED STORY IN SEARCH OF LIVING WATER

In the beginning, the water under the darkness was wild and uncontrollable. But the Spirit was hovering there, contemplating a different and better future. Then God went to work in a series of good, good days. The essence of it was to bring order, consistency and beauty out of the chaos.

This meant putting unruly water in its place, first creating a vault to hold the water up high away from the water down low. Next he told the water down low to settle in and stay within its proper bounds. Water, left to its own devices, tends to run roughshod over everything, which only begets bedlam.

Bedlam is not what God intends for his new world.

So God separated what was all run together, and then he filled those newly created spaces with all kinds of living, flying, running, swimming, growing things. Life. When it’s working like it’s supposed to, life operates with a simplicity on the other side of complexity. Living things working together for mutual benefit. This is the flourishing vitality God wants. He wants rich, strong, ongoing life in all the spaces and places of his creation.

And in the water, now duly tamed, he generated the great creatures of the deep and all manner of living, teeming things and in an inordinate number of shapes and sizes and colors.

And about this thing called life God stepped back and said, “This is of an exceptional quality—marvelous actually—and I fully approve.” God loved life. The story of the Bible is really nothing more than the outworking of this great love of God’s, despite all the obstacles that will arise.

The thing about life is, it’s always tied closely to water. All the creatures, not just the sea creatures, need water. This is why in God’s garden, even before there was rain, God was watering everything with surface streams bubbling up from the waters under the earth. It’s why the garden was the epicenter of fertility, the source of life flowing out to the wider world.

From Outreach Magazine  5 Myths About Preaching

In the Bible’s founding story, the garden of Eden was the equivalent of the Most Holy Place in the temple, that is, God’s throne room. (Or perhaps it’s more accurate to say the Most Holy Place is the equivalent of the garden of Eden, which is the first temple in the narrative.) As in other ancient near eastern stories, life-giving water flows from the deity’s throne spreading health and vivacity wherever it goes. Eden’s four rivers—the Pishon, Gihon, Tigris and Euphrates—could all just as well be named Life.

So there you have it. The two big ideas about water that run through the entire narrative focus on the threat of chaotic, uncontrolled water and the absolute necessity of the running, streaming, flowing water of life. The struggle between these two opposing expressions of water is the battle at the center of the Bible.

Tragically, evil grew in the human heart—all the human hearts—so that the inclination toward wrongdoing became pervasive. And all that good, good life that God loved is now constantly threatened. God sees and knows and his own heart becomes more troubled than he can take. What will he do?

Remember, it was God himself who made the water stand down at the beginning of the story. But when Adam’s children go from bad to worse, not long after that glorious beginning, he decides to uncreate the world by letting loose the wild water once again. He opens the vault and the crazy waters fall and flood and destroy his world.

What is this? God regrets that he even made the human race in the first place? Really? Regrets the whole thing? Is this biblical drama to be merely a short story about a very temporary world? Yes, yes, and yes, but then thankfully, no.

God preserves a precious few representatives of life on earth, seeds of a second chance. The story lives to see another day. As a sign that God will at least not flood the stage again, he makes a firm promise and hangs his bow (the same Hebrew word as is used in bow and arrow) in the sky as a reminder of his pledge.

The next major water event in the Bible is another ark story. The life of Israel’s still-tiny first liberator is preserved in an also tiny papyrus boat. Providentially, it is royalty that recovers the basket and is immediately enamored with the baby boy. The saga of Moses, as it turns out, will be about water at several key moments. In his face-off with Pharaoh water will figure in three of the plagues to fall on Egypt—water turns to blood, swarms of frogs come up out of the Nile, and finally hard water shreds the land in a vicious hailstorm.

The plagues finally work and Pharaoh decides to free the Israelites, but then reverses course and chases them. Moses and the Israelites are trapped between the troops and the sea. But the Lord who put water in its place at the start of the story can do it again. He drives the waves back and creates a path for his people. When they are stuck in the desert, thirsty and despairing, he brings them to the springs and palm trees of Elim, and even squeezes water from a rock. One way or another, God is going to provide for his people.

From this point on we see water flowing alongside the story at every turn. It’s in the great basin in the tabernacle, cleansing those who will enter into the presence of God. The Psalms celebrate God’s Spirit going forth to renew the face of the earth, bringing water with him for the beasts of the field and the plants on the ground. Sometimes, though, the water comes in the form of tears, signs of longing and pain. Exiled people sit by a river in Babylon and add to its volume with their weeping.

God’s goal is always life and renewal. He pushes water aside when he needs to, for he is Lord over the deep. But in the end, he will lead his children beside quiet waters. It is the more gentle gift of the water of life that will settle things once and for all.

This is precisely what the prophets foresee: a coming time when streams will run in the desert of Israel’s life, in the wilderness of its discontent. The Lord’s word is like rain and snow that fall from heaven, watering the hope of healing and restoration.

The Messiah enters the drama by joining in a baptism of repentance for Israel. Just as the nation crossed the Jordan River when they first entered the land, so now Israel launches the time of renewal in the Jordan with John the Baptizer. Jesus, too, came up out of that water, the agent of Israel’s rebirth. The Spirit descends on him like a dove, and the Father speaks his approval. The time has surely come, and we know because of what’s happening in the water.

Jesus too is Lord of the waters, acting like Yahweh, walking on seas and calming fierce tempests with a word. He even turns water into wine, signaling that the promised time of plenty exists wherever Jesus is. But the best word he ever spoke—best and most essential—he actually spoke twice.

First he said it to a foreign, ostracized woman at a well, and then again on the last and greatest day of the Festival of Tabernacles in Jerusalem. “Thirsty?” Thirsty for something more, something lasting, something deeply transformative? Then come to me. Come and drink and truly, I’m telling you, rivers of living water will now flow within you. The Spirit who renews life will renew your life.

This Jesus-river will grow and flow from the temple of God, freely and far and wide, covering the whole earth with the knowledge and love of God. It will heal all things, grow all things, restore all things. It will be like the garden of Eden all over again, but now a garden in a city, the New Jerusalem. This is the future the story of the Bible yearns for, this story which is really an invitation.