Home Features The Story of the Bible Told Through Trees 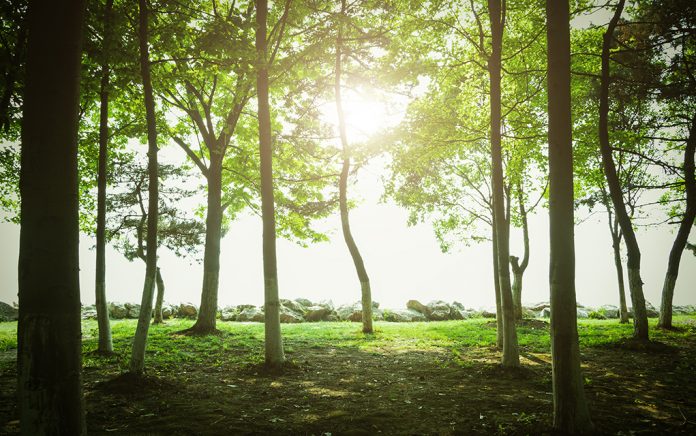 Trees appear throughout the Bible as signposts of God’s promises and relentless grace.

The stuff of earth is the stuff of life—and also the stuff of the biblical story. Trees, mountains, water and food all figure prominently in the slowly unfolding drama of the Holy Scriptures.

Now the fact is, there are lots of prisms for viewing the storyline of the Bible, many built from big theological concepts like covenant and kingdom. But it’s also possible to over-theorize the Bible, turning it into a collection of abstractions. But the Bible itself doesn’t do this. The Bible keeps its story close to the ground, making sure we remember it’s fundamentally a down-to-earth saga.

So, following the lead of the Scriptures themselves, we want to give you some takes on the big story from the perspective of four earthly elements of redemption. These windows into the Bible’s narrative of renewal are all the stuff of life. First up, those uniquely shaped, taken for granted, yet completely necessary partners in the creation: the trees. Next, we’ll explore how high places and mountains, free-flowing water, and moveable feasts each play their own part.

FROM DYING BRANCHES TO LEAVES OF HEALING

Humanities professor Alan Jacobs, who’s written a bit about the gospel of trees, says “If you understand the trees, you understand the story.” And it’s true, the trees are there from start to finish, and one tree in particular is at the very center of the entire narrative. Trees can be both strange and beautiful, common and magnificent. Trees, apparently, are aptly made for playing key roles in the performance.

In the beginning, God said let there be a world filled with light and dark, turning from day to night and back again. Let there be earth and sky and land. And right in the midst of it all, let there be trees—of the seed-bearing fruit kind in particular.

God then gave the trees to all the beasts, and all the birds, and all the creatures that move along the ground—everything that had the breath of life in it. The trees were a gift from the Creator for the flourishing of life on his newly-made earth.

Therefore, there are trees everywhere in the story. They are sign and symbol of the existence of life itself, which should be unsurprising since they are the longest living organisms on earth. Methuselah, a Great Basin bristlecone pine in California’s White Mountains, comes in at over 4,800 years old. The longevity of trees gives us a picture of the endurance of life.

But trees, of course, do much more. They provide food and shelter and shade. They lower temperatures, filter water, sequester carbon dioxide and continually pump out the very oxygen the rest of us breathe.

In the Bible trees are often signposts and gathering places, and they provide images of both the blessing and the judgment of God. You can tell how the story is going based on what’s happening with the trees.

In the time of Noah, still early in the narrative, the fate of the whole earth was itself already in jeopardy, and all the trees were flooded. But God was not quite done with this whole shebang, and Noah sent out a dove to search for some sign of life in the aftermath of deluge. When it came back with the leaf from an olive tree in its beak, Noah knew there was a chance. A chance for the story to move forward, however tentatively, toward some kind of better resolution.

Then Abraham, chosen as God’s answer to Adam’s failure, was brought to a new land to help the story get a new start. After surveying the length and breadth of this unfamiliar place, he decided to settle in the vicinity of the great trees of Mamre, a place he did not own. He was a sojourner at this point, someone living off a promise-not-yet-turned-reality.

The Bible’s story is always a story of promises. It does get to some “Alreadys,” but there are always more “Not Yets.” Abraham was staking his future on that place of great trees, believing against the evidence that great things would be done by his own as-yet-non-existent family. And it would all be for the sake of the life of the world.

When Abraham’s family turns into a nation of slaves, God sends a man with a wooden staff to rescue them. God’s power flares from that staff, and the road to freedom is opened. When the liberated people are stuck in a mostly lifeless desert, God leads them to camping places like Elim, home to 12 springs and 70 palm trees. Islands of trees, proof of water nearby, are lifelines to a new land.

Trees end up being the barometer of the blessings of the covenant bond between Israel and God. When Israel celebrates how God rescued them, the festival begins with the people taking “branches of luxuriant trees—from palms, willows and other leafy trees” to build temporary shelters as they remember the Exodus and rejoice before the Lord for seven days.

Covenant faithfulness means that Israel’s good life in a good land will be marked by thriving crops and trees, with the harvest of produce and fruit lasting all the way through to the next growing season. And around the edges of the orchard there is enough for the poor to be fed too.

Powerful empires are characterized as trees—large and strong, with their tops touching the sky (as Nebuchadnezzar’s Babylon is described). But sometimes empires must be brought low and proud kings humbled, so a mere shepherd and keeper of sycamore-fig trees, like Amos, might be brought in to deliver the unpopular word of the Lord. It is the Maker of trees who can cut down the tall tree and replant the low one to make it grow. With a God like this, trees are not always what they seem.

God’s people are like a tree and they are therefore judged and pruned, sometimes severely, but never outright destroyed. Cut back and even burned, there is a life within them that persists. And it is onto this besieged and wavering remnant that God will graft a new people, fulfilling that old oath to Abraham. His family will be what it was meant to be after all. The forests will be filled and the earth will find its own exodus story. The story of trees is inexorably tied to our story.

One thing about this story of trees in the Bible is that it is inevitably a story for the long term. Trees are mostly slow-growers, but are all the more enduring for their deliberate pace. And this is exactly how God’s plans for his world also go. Slow, but steadily onward and upward. Trees sometimes turn into weapons and siege ramps, or are fashioned into tools for idolatry. But out of the cut stumps and smoldering ashes, God patiently nurtures life. The trees live on, and from the trees new growth will emerge. Hope, symbolized by the trees, does not die.

From Outreach Magazine  'Move in Her Direction': A Simple but Powerful Lesson on Biblical Reconciliation

So it is that we find the heart of God’s drama with the world in the story about the Messiah. He himself was like his people, at first sight a man of no apparent consequence. Merely a branch coming up out of the old stump of Jesse. But the Lord’s Spirit rested on him and he did what he had come to do. He eventually used a tree to rescue the story of trees. And the story of us.

It is a strange story indeed, this tale of the Tree of the Curse that must be faced in order for the long-lost Tree of Life to reappear. This Branch of David came and did much good, healing and feeding and teaching the people. So when he entered Jerusalem as king, they cut branches from the trees and lay them out to honor and celebrate him. They thought they knew what victory looked like. But Jesus said this is a hard time, a time you neither expect nor understand. And the decisive deed was done not with a waving of branches but with a hanging upon a tree.

No doubt it looked like merely another dead man upon some dead pieces of wood. This happened plenty enough with the Romans. But this time was different, because all along Israel’s warrior had been fighting a different kind of battle. The spiritual forces of evil cannot be fought by killing Roman soldiers.

When the Creator vindicated his work and raised him from the dead, this unusual Messiah was mistaken for a gardener, which was just right since he really is the crafter of Life. Indeed, he is a New Temple, the place where God dwells with us, except now it isn’t just carvings of trees and fruit upon doors and walls, but rather life itself brought back to earth. That ancient Life Tree had been found, tended and strengthened, so it can now restore everything. It is right there, in the middle of the city which is to come.

The Scriptures tell us that to walk with Jesus is to walk back into God’s garden. It is to be with God in the cool of the day. And the leaves there are for the healing of the nations—their trees, their people, everything.

“Let the heavens rejoice, let the earth be glad;
let them say among the nations, ‘The Lord reigns!’
Let the sea resound, and all that is in it;
let the fields be jubilant, and everything in them!
Let the trees of the forest sing,
let them sing for joy before the Lord,
for he comes to judge the earth.”

“Give thanks to the Lord, for he is good;
his love endures forever.”