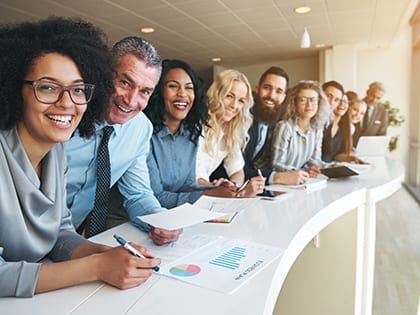 Leverage each other’s strengths for a more cohesive team.

“It is not good that man be left alone” (Gen. 2:18). From the beginning of time, we were made to be together. In my experience, the willingness to work with others and collaborate can move a team from bad to decent, decent to good and good to great.

I’ve watched and served many of the very best church teams on the planet. As I reflect on what makes them work well together, it’s clear that it’s their commitment to being together and leveraging each other’s strengths. Here are three common denominators I’ve noticed about great teams.

1. Great teams listen to each other.

I recently learned that Winston Churchill was nearly deaf. He once said that the great tragedy of deafness is that it removes you from the circle of life. We were made to converse, to collaborate. And when we cannot hear, we lose that interaction.

I was once asked, “What’s the most uncommon trait you see among candidates your company interviews?” I answered right away: “Self-awareness.”

We have now conducted more than 10,000 face-to-face interviews, and I can count on one hand the number of candidates who have high self-awareness. Most frequently, candidates with a trip up in their past will explain their failure in terms of what happened to them, rather than what they did to cause the failure. Everyone messes up, but very few own their own stuff.

The more I interview, the more I come to appreciate Jesus’ advice for me to “get the log out of my own eye before worrying about the splinter in another’s.” When a team is committed to this way of thinking, its collaboration soars.

From Outreach Magazine  8 Steps to Creating Your Own PEACE Center

Hiring is an exercise in facing the unknown. When you have a team vacancy, it’s natural to get nervous about who to hire and what will happen if it takes a long time to fill the position. Too many times, I see people try to calm their fear of the unknown by hiring the known. Even worse, they hire someone exactly like them.

The problem is, a team made up of all the same kind of person isn’t a team—it’s just a hall of mirrors. Great teams are made up of complementary people.

What are you doing to balance your hires? What safeguards do you have in place to keep yourself from hiring people just like you?

It’s not good for us to be alone, but just being on a team doesn’t make it a great team. I’m learning that listening, knowing who I am on the team and surrounding myself with a team of rival personalities is unlocking potential I didn’t know possible. Hopefully, those keys will make your life as a team better and more productive than ever.