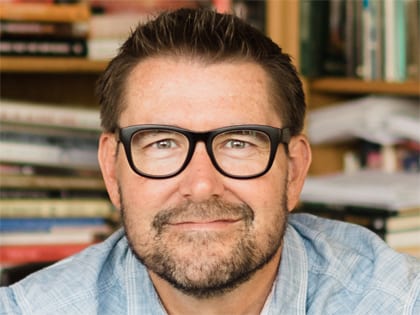 “How did God create? With his voice! The universe is his way of saying, ‘Look at what I can do with four words.'”

You may have no sensation of motion right now, but that is an illusion of miraculous proportions. The reality? You are on a planet that is spinning around its axis at a speed of approximately 1,000 miles per hour. And you don’t even get a little bit dizzy! Plus, planet Earth is speeding through space at approximately 67,000 miles per hour. So even on a day when you feel as if you didn’t get much done, you traveled 1,608,000,000 miles through space!

Now let me ask: When was the last time you thanked God for keeping us in orbit? I’m guessing the answer is never. Why? Because God is so good at what He does that we take it for granted. Never once have I knelt and prayed, Lord, I wasn’t sure we’d make the full rotation today, but You did it again.

There are people, and perhaps you are one of them, who would say they’ve never experienced a miracle. With all due respect, I beg to differ. We experience a miracle of astronomical proportions each and every day. The irony is that we already trust God for the big miracles, like keeping us in orbit. Now the trick is trusting Him for the little miracles: everything else.

In order to fully appreciate the power of God’s voice, we have to go all the way back to the beginning. He speaks the universe into existence with, count them, four words:

“Let there be light.”

These are God’s first recorded words.

This is God’s first recorded miracle.

Light is the source of vision; without it we can’t see a thing. Light is the key to technology; it’s how we can talk to someone halfway around the world without so much as a second’s delay because light can circle the globe seven and a half times a second. Light is the first link in the food chain; no photosynthesis equals no food. Light is the basis of health; the absence of light causes everything from vitamin D deficiency to depression.

From Outreach Magazine  Why Unmarried Should Not Mean Alone

And light is the measuring stick for space-time; a meter is defined as the distance traveled by light in a vacuum during a time interval of 1/299,792,458 of a second. Light is the alpha and omega of everything, and that includes you (see 1 John 1:5).

Did you know that embryologists have recently captured the moment of conception via fluorescence microscopy? What they discovered is that at the exact moment a sperm penetrates an egg, the egg releases billions of zinc atoms that emit light. Sparks fly, literally! That miracle of conception is a microcosm that mirrors God’s first four words.

On January 1, 1925, Edwin Hubble gave a presentation to the American Astronomical Society that proved to be a cosmological paradigm shift. At the time, the prevailing opinion was that the Milky Way galaxy might be the sum total of the cosmos. Hubble, a pioneer in extragalactic astronomy, argued otherwise. His key piece of evidence was the degree of redshift observed in light coming from distant stars that increased in proportion to their distance from planet Earth.

In one fell swoop the size of the known universe was increased by a factor of one hundred thousand. Even more significant was this simple fact: the universe is still expanding. Nearly a century later the Hubble telescope has spied an estimated two hundred billion galaxies, and recent research indicates that this estimate may be at least ten times too low.

Here is the significance of that discovery: the four words spoken by God in the beginning are still creating galaxies at the outer edges of the universe. Four words! And the result is an ever-expanding universe that measures at least ninety-three billion light-years in diameter.

If God can do that with four words, what are we worried about?

The very first revelation of God was as Creator. And because His creation is so awe inspiring, it’s easy to overlook how God did what He did. But to me, the mechanism of creation is just as amazing as creation itself.

How did God create? With His voice! The universe is His way of saying, “Look at what I can do with four words.” The voice that spoke the universe into existence is the same voice that parted the Red Sea and made the sun stand still. His voice can heal a withered hand or wither a barren fig tree. His voice can turn water into wine, install synaptic connections between the optic nerve and visual cortex in a blind man’s brain, and resurrect a man four days dead.

There is nothing God’s voice cannot say, cannot do. And, frankly, He can do it however He pleases! He can speak through burning bushes, Balaam’s donkey, or Bethlehem’s star. His voice can write on palace walls or shut the mouths of lions. It can quench the flames of a fiery furnace or stop a storm on the Sea of Galilee.

The voice of God is all-powerful, but that’s only half the story. His voice is also all-loving. In the pages that follow, we’ll explore seven languages of God. The first language is Scripture, and it’s the Rosetta stone. The other six languages we’ll look at are secondary languages: desires, doors, dreams, promptings, people, and pain. But all of them are love languages. Why? Because “God is love.” (1 John 4:16, NIV)

Mark Batterson is the lead pastor of National Community Church in Washington, D.C. He’s also the New York Times best-selling author of a dozen books, including Chase the Lion and Whisper: How to Hear the Voice of God, from which this excerpt was taken. Visit him at MarkBatterson.com.