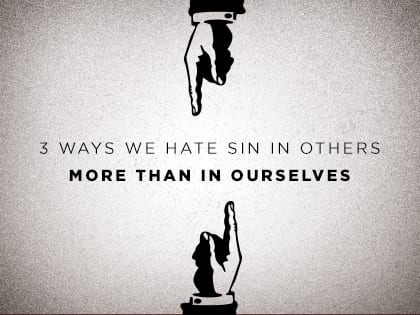 “We can easily hate the sins of others more than we hate our own. We need God’s grace to overcome this.”

After David committed adultery and murder, and the Lord regarded all of it as evil, the Lord sent a prophet named Nathan to confront David in his sin (2 Samuel 12). Like any good preacher, Nathan set up David with a killer illustration:

“David, there were two men in a certain city. One was filthy rich. He had tons of cattle, tons of sheep, lots of money, and could afford anything he wanted. The other guy was poor. He only had one lamb and he loved it. He treated the lamb like a daughter, fed the lamb from his own plate, and even snuggled with it. One day the rich man had a guest visit, and instead of slaughtering one of his many animals, he killed the poor man’s lamb for his dinner party with his guest.”

When David heard the story, he burned with anger. He did not want that type of ridiculous, selfish and evil behavior tolerated in one of the cities under his watch. He wanted justice and restitution, so he fiercely declared: “As the Lord lives, the man who did this deserves to die! Because he has done this thing and shown no pity, he must pay four lambs for that lamb.”

David missed the point of the illustration. Like David, in our blindness we can be angered by another’s sin but hardened to our own. We can be exponentially more disgusted with the sin in other people’s lives than we are with the sin in our own lives. Our own sin can fail to anger us the way someone else’s sin does.

[Are you a modern-day Pharisee? Twelve signs of Christian legalism.]

Here are three common examples of this:

1. We abhor laziness in others while being addicted to our jobs.

Laziness is sin, but so is finding our worth in our jobs. If we bemoan laziness in others, we must be careful that the plank of workaholism isn’t in our own eyes.

2. We bemoan sins in our culture while being uncompassionate.

God regards our failure to love others and share the good news of the gospel as sin. He is displeased with our lack of compassion because he is gracious and compassionate, slow to anger and rich in love. Yes, he is full of truth. But he is also full of grace.

3. We bemoan materialism while being stingy and ungenerous.

If we bemoan materialism because we would rather hoard, our sin is no less offensive to God. While using money in an attempt to gain status or comfort is empty, so is using money to build a false sense of security.

In our sinfulness, we can easily hate the sins of others more than we hate our own. We need God’s grace to overcome this.