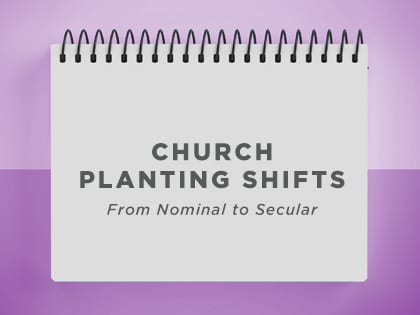 “Our approach needs to change for there to be significant traction in planting movements within a largely secular society.”

In part 1 of our series on subtle-yet-important church planting shifts, we dealt with the changing face of the church launch. As I mentioned, this includes a downscaling of the traditional launch mode to build up more core elements that will allow the church to go the long haul.

In part 2, I unpack the next trend: a shift from a focus on nominal Christians to more secular people, and how that affects church planting methodology.

Statistically, most people in America are nominal Christians. About half of the people in America call themselves Christians, but they don’t have any statistically discernable life change. Actually, as I’ve written, only about 25 percent of Americans call themselves Christians and have demonstrable engagement in that commitment. This reality, and its changing numbers, are essential to understand the future of outreach and evangelism.

The challenge is that most of our church planting efforts target the fastest-shrinking segment. We focus on nominal Christians because we think this will yield the greatest result or provide us with the easiest path for people to attend our church.

They probably will. And today, in most places, that focus makes sense. However, the category of nominal Christians is the fastest-shrinking category today. Perhaps 20 years ago, nearly 60 percent of the population was nominal Christian. Yet now, nominalism is declining about 1 percent per year. It’s still the largest group, but the vast majority of our church planting strategies aren’t making the changes necessary to reach a different group of people that is emerging.

Today, most unchurched people churches reach are either dechurched, formerly churched or are a kind of nominal Christian who is not antagonistic toward church people. As a result, our methodologies tend to be geared toward those who are a bit similar to us, as there is a certain comfort in drawing from the pool of people who are at least “nominally” Christian.

From Outreach Magazine  5 Tough Decisions You May Need to Make

Bear in mind that nominal Christians are still the largest segment of our population, within which Christianity will always find its greatest percentile growth in church planting endeavors. Many are open and receptive.

But when we look at younger adults (specifically college students), only 30 to 35 percent would fit the same description as nominal Christians—and many more are secular. This is 15 to 20 percent less than the population as a whole. There is a shrinking pool that will shrink even more in the flood of secularism in America and many other parts of the world.

As nominalism shrinks, and secularism rises, our approaches will become less effective in a reality where almost every church is targeting nominals. Consider reading James Emery White’s book The Rise of the Nones, which will help you frame this new era in a meaningful way and embark upon a fresh approach in a changing world.

As we adjust our eyes to reaching secular people, not surprisingly, we must remember that relationships become increasingly important. Secular people aren’t sitting around saying, “Man, if there was just a better version of the church, I would go to it!” They have largely decided that their worldview does not accommodate religious viewpoints and that they have even outgrown religion itself.

Most secular people are not atheists, however. Atheists make up only about 4 to 6 percent of the U.S. population.

One thing is sure, though: There is really no marketing-based approach that is going to significantly appeal to an increasingly secular culture. We cannot plant churches among secular people in the same manner that we plant among nominals and expect the same return.

If current trends continue, about 1 percent less people per year call themselves Christian (and often start calling themselves “nothing,” or what we call the “nones”). So, in 15 to 20 years, we’re going to get to the place where nominalism is going to be replaced by secularism as the largest group.

Therefore, our approach to church planting needs to change for there to be significant traction in planting movements within a largely secular society.

We need more outreach and evangelism, but we also need to understand that things are changing. As we reach nominal Christians, we need to also train people to start reaching the growing secular context.

Church plants that are reaching people will reach nominal Christians but will increasingly need to reach secular people.