Home Features Talking With God: Stepping Out Beyond Our Inadequacy 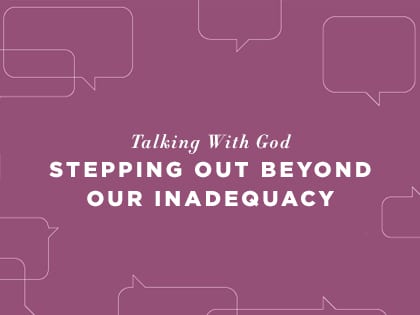 “When God does the impossible through average people, we clearly know it’s all God. It’s because of his abilities, not ours.”

I’ve always been quite average. I was good enough at football that I wasn’t picked last during recess, but I was too short and slow to be a great athlete. I made the honor roll in high school but was never at the top of the class. And while I laboriously prepared solid speeches for my communications class, I always seemed to mumble the words during the delivery.

In my appearance, gifts, skills and expertise, I’ve always been average. Everything I could do, someone else could do much better.

When you feel ordinary, average or less skilled, it’s always easier to play things safe, isn’t it? To blend in. Don’t raise your hand. Don’t step out. Take no chances. Don’t try to be used by God.

To be honest, “safe” is where I wanted to stay. Why risk failing if you don’t have to? Why take the chance of looking stupid if it’s not required? As a young person, I didn’t mind staying right where I was.

In the Bible, we see all kinds of ordinary people being used by God. Some of them were actually below average in some ways. Abraham was too old. Moses stuttered. David had a moral failure. Lazarus was dead! Their stories are powerful accounts of God using average people for great things.

Within each of us, there’s a desire to be used by God. We want to take part in something great, to make a difference for good. We want our lives to matter. Ask a person, “What would you do if you knew you couldn’t fail?” and long-kept dreams will flow out:

“I’ve always wanted to be a teacher. A doctor. A police officer.”

“My whole life, I’ve wanted to make a difference in the lives of others.”

“I have this desire to help people. I want my life to matter.”

From Outreach Magazine  Beyond Invite and Invest: A Better Plan for Outreach

When we think of “great things,” we typically picture a story that will make the news or get shared in a book. But I’m beginning to realize that with God, anything can be a big thing.

In the Bible, we see that through an act as simple as opening up our homes for guests, we might be entertaining angels. Just offering a person a glass of water is really an act of kindness toward Jesus himself. Sometimes the smallest things make the biggest difference.

Looking back at my life, I’m amazed by how God continually prepares us for the question, “Whom shall I send?”

When I was a kid, my mom and I volunteered at a local nursing home each Wednesday. She played the music and we both sang for the folks living there. At first, I was terrified by the “old people.” They were excited to see me, but I was scared to death to see them. But as the people slowly wheelchaired themselves into the room, Mom would begin playing the piano as I handed out the songbooks. Before long, I loved helping people find the right page so they could sing along.

I also didn’t like hospitals or funeral homes. They were depressing and smelled weird. As I walked past a hospital room, I always worried about what I’d see as I peeked in. During college, I heard about a flower shop that needed a delivery boy. I needed money during the summer, and I figured it couldn’t be that hard to deliver flowers.

I had no idea that most of a flower shop’s deliveries went to hospitals and funeral homes. Many of the flowers sent to hospital rooms were ordered by loved ones who couldn’t be there in person. Before long, instead of dropping off the flowers and leaving, I often asked the patients how they were doing. Sometimes I commented on how pretty their flowers were and mentioned that I would be praying for them. Even though this was a small, simple gesture, I left feeling that I had made a difference in people’s days.

Who would have known that years later I would take a job that would require me to be comfortable in nursing homes, hospitals and funeral homes?

With God, all things are big things. He’s constantly at work, shaping and preparing us for the next adventure that will take us to the places we least expect.

The truth is, I’ve never been adequate. It’s been God the whole time. So there’s nothing different in what lies ahead. On my own, I am completely inadequate. If you need proof that God can use you, look no further. I’m your guy.

We’re right where we need to be in order to be used by God. All we have to do is say yes.

When we’re willing to say yes to the small things, he’ll give us opportunities to say yes to big things. This is the story of my life.

Share your story at church as a junior in high school?

Go to seminary even though you have a business degree?

Start a church even though you think it’s crazy?

Launch a second campus. And then a third, fourth and fifth?

Even though you’re not a writer and you have zero qualifications to write a book, write one?

“Who will bear my light to them?” Jesus still asks.

This article is adapted from Talking With God: What to Say When You Don’t Know How to Pray by Adam Weber (WaterBrook, 2017).

Adam Weber is the founder and lead pastor of Embrace, a church that has six campuses in South Dakota and Minnesota.