Home Features Is the Church on the Wrong Side of History (Again)? 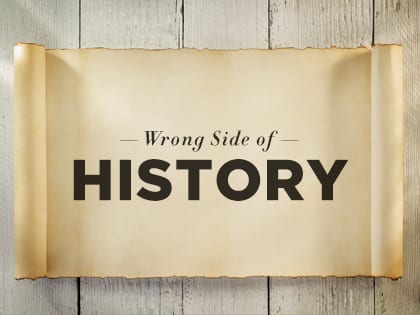 “Martin Luther King Jr. warned that when the church loses its voice for justice, it loses its relevance in the world.”

This month, we honor the legacy of Dr. Martin Luther King Jr. Though he is a hero today, 60 years ago he was vilified for daring to challenge the social norms of a segregated society in which African-Americans faced daily discrimination and abuse.

It’s so clear to us now how wrong those norms were. And it’s an uncomfortable fact that back then, some American Christians were complicit in this injustice. In his powerful “Letter from a Birmingham Jail,” Dr. King registered his disappointment with the church leaders who opposed him outright, as well as those who “remained silent behind the anesthetizing security of stained-glass windows.”

With the perfect vision of hindsight, we wonder how past generations of Christians sat by and tolerated racism and other social ills like slavery and the oppression of Native Americans. Were they just proverbial frogs in the kettle, gradually becoming comfortable in the status quo until it was too late?

More to the point, can it happen to us today? Do we continue to remain silent and anesthetized within our church walls about injustice?

Listen to what Jesus said in Mark 7 as he challenged the Pharisees: “Isaiah was right when he prophesied about you hypocrites; as it is written: ‘These people honor me with their lips, but their hearts are far from me. They worship me in vain; their teachings are but rules taught by men.’ You have let go of the commands of God and are holding on to the traditions of men” (verses 6–8).

“Holding on to the traditions of men” is exactly the problem we struggle with when we are called to challenge our culture instead of being absorbed by it. The church should shine a spotlight on what society misses or condones and speak out with a prophetic voice that breaks through cultural value systems. Like the Old Testament prophets, church leaders should remind people of God’s priorities.

Being prophetic takes courage, because it doesn’t usually make you popular. After all, Dr. King penned his stirring words from a jail cell. Challenging the status quo often leads to taking a controversial stand that can make even people in the church pews uncomfortable.

When I first joined World Vision in 1998, my heart was immediately broken by the AIDS pandemic in Africa, especially by the suffering of widows and orphans. The rest of the world was uncaring. And American Christians were downright hostile; AIDS was perceived as a gay disease contracted through a promiscuous lifestyle—if you had AIDS, you deserved it.

And that view even extended to the blameless children affected by the disease. In a survey World Vision conducted with the Barna Group at the time, only 3 percent of evangelical Christians said they would definitely donate money to help children orphaned by AIDS, and 52 percent said they probably or definitely would not help them.

Despite this initial reluctance, I’m happy to say that thousands of American pastors rose above the prevailing attitudes of the time to come alongside World Vision in caring for the “widows and orphans in their distress,” joining a global groundswell of support that has turned the tide against AIDS.

But there’s another justice “blind spot” in our world today. Syria’s civil war has ravaged the former middle-class country, contributing to a refugee crisis that dwarfs anything we’ve seen since World War II. From Syria and neighboring Iraq, more than 15 million people are displaced—80 percent of them women, children and elderly people.

The prevailing view in America toward refugees is characterized by fear, distrust of Muslims and self-protection. But the church should be seeing what no one else does—looking at these desperate people through the eyes of God.

From Outreach Magazine  Leadership and the Art of Humility

Yet I find myself wondering, just as I did at the height of the AIDS crisis, Where’s the American church in this crisis? Again I’ll quote a survey, one World Vision just conducted, that found that Christians are only slightly more likely to help refugees than non-Christians. Thirty-six percent of Christians have taken some action in the past two years, 6 percent fewer than in 2015. And most worrying of all, the percentage of Christians who are willing to pray for refugees dropped 11 percent from last year.

Christians should care about this crisis for three clear reasons. The first is simply because these are human beings made in the image of God—human beings that Jesus died for. Second, this may be a once-in-a-lifetime opportunity to share the love of Christ in the heart of the Middle East. And third, indigenous Christian churches in the Middle East are staggering under the weight of this crisis and need our help. Many have even become refugees themselves. The churches that remain have been overwhelmed as they try to respond with the love of Christ to the teeming masses arriving at their doorstep.

Martin Luther King Jr. warned that when the church loses its voice for justice, it loses its relevance in the world. This refugee crisis is yet another test of our relevance. Today we can honor Dr. King’s legacy by challenging the status quo and obeying what God demands of us in Micah 6:8, “to see that justice is done, let mercy be your first concern, and humbly obey your God.”