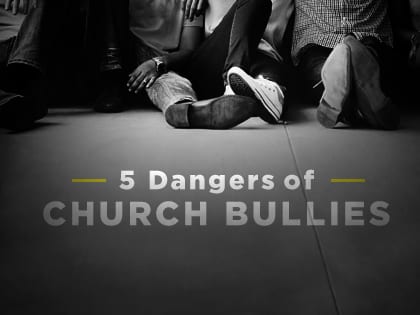 “If no one is willing to confront church bullies, the church is already on a path toward decline and death.”

The pastor did not see it coming.

Sure, there were some hints and signs, but nothing to prepare him for the meeting on Saturday with the personnel committee.

He was told he needed to resign. There was no explanation given. He had only been given positive feedback since he began. Some of the people on the personnel committee had been his supporters and friends.

The pastor was leading change in the church. The church was growing and vibrant. But a couple of weak staff members didn’t like the direction and expected accountability. They teamed with the known church bully and went before the personnel committee. They presented their perspectives.

The pastor never was asked his perspective. He could have fought the weak personnel committee and likely won. But he didn’t want to tear apart a church he loved.

A church cartel is an alliance of bullies, bully followers, carnal Christians and even non-Christians in the church. Its ultimate goal is to get its way. It feeds off of selfish power.

We don’t like to talk about church bullies. After all, it’s not the Christian thing to do. But they exist in too many churches. And if they are not exposed, they will continue to wreak havoc.

1. When bullies are allowed power, the church is already unhealthy.

The cartel is, by its definition, self-centered and power-driven. A church is already very sick if members remain silent and do not confront this evil directly.

If you have any doubts about this danger, please see my post “Autopsy of a Deceased Pastor.” See the comments. See the pain and questions and defeat church bullies leave behind.

Some of these leaders are driven away by the cartel. Others leave on their own accord because they want to be in a joyous and healthy church. Their departure exacerbates the problems in these churches.

4. Church bullies cause church leaders to work from a posture of fear.

Instead of moving forward in faith, church leaders often spend more time worrying about how their decisions will be received by the cartel. These leaders know the cartel will come after them if they go contrary to the carnal group’s wishes.

5. We are told in Scripture to manifest the fruit of the Spirit; church bullies cause the church to do just the opposite.

Courageous leaders must confront and stop church bullies. If no one is willing, the church is already on a path toward decline and death.

Thom S. Rainer serves as president and CEO of LifeWay Christian Resources. Dr. Rainer can be found on Twitter (@ThomRainer) and at facebook.com/Thom.S.Rainer. This article was originally published at ThomRainer.com on Nov. 30, 2016.