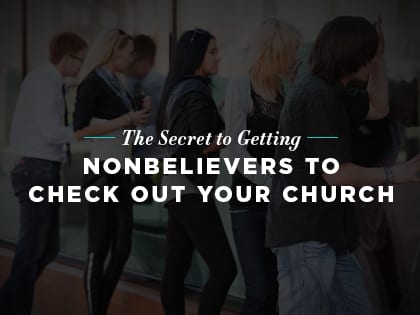 “It’s not about compromising your doctrine—it’s about the church being at the heart of transforming your community.”

LifeWay Research recently polled thousands of nonbelievers about what it would take to get them inside a church. When I thought about it, the results made perfect sense, but most church leaders never consider these possibilities.

Focused on Americans who do not attend church, here’s what they said would draw them into one:

Notice that only 35 percent of nonbelievers responded with a worship service. Pastor Tony Miller at The Gate Church in Oklahoma City was already thinking this way. Because of his personal passion for unity, and as a result of the recent racial issues in cities across the country, Tony held a “Forum for Transformative Cultural Reform” at his church. He invited local politicians, the police chief, the superintendent of schools, an imam from a local mosque, a Jewish rabbi, the president of the local NAACP, the executive director of Black Lives Matter, the vice present in charge of diversity at the university, a local court judge and others.

The event drew more than 700 people—many who had never visited a church before. It was a remarkable event that positioned The Gate Church in the center of the effort to bring unity in the city. Afterward, he received an email that said: “Thank you for hosting last night’s forum. It was an incredible start to the healing and transformation of our city.”

Another attendee remarked about pastor Tony: “I’m going to have to bring my wife over hear to hear this man. I really like him. He’s got an incredible perspective and heart. He’s one of the few people I deal with that ‘gets it.’”

Another said: “I’m coming back one Sunday.”

Tony reported to me that the state senator wanted to follow up with him, and he had already scheduled a lunch meeting with the local imam.

• It helped move forward the conversation about racial unity in the city.
• It brought people together who might never have met otherwise.
• It exposed more than 700 local citizens to an important mission of the church.
• It created a comfortable “first” experience for hundreds of people who have never walked in the door of a church.

Perhaps an important way to grow your church is to become a platform in the community for issues that matter to those who would never otherwise visit. It’s not about compromising your doctrine—it’s about the church being at the heart of transforming your community.

I’d love to hear about the results of similar events at churches across the country. Any reports?