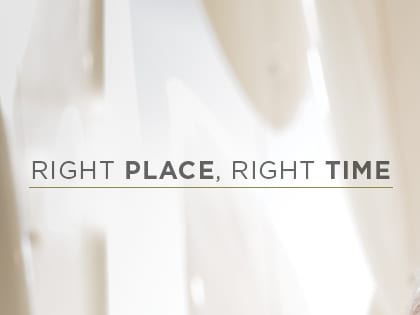 “I feel very strongly that if a person says they want to commit their lives to Christ, it should be acted on immediately.”

I feel very strongly that if a person says they want to commit their lives to Christ, it should be acted on immediately.

I was at lunch the other day with some of the pastors from our church in our favorite seafood restaurant. There is a server there that usually waits on us, and we joked a bit and placed our order. She came back to us with a serious look on her face and said, “I have to ask you a serious question.”

I responded, “Go ahead.” She said, “When are your service times at your church?” We told her and then she said, “I want to come to your church this Sunday and rededicate my life to the Lord.”

I think my response surprised her. “No,” I said. “You need to commit yourself to the Lord right here, right now!” She hesitated. “Here?” she asked. Smiling, I said, “Right here, right now.” She agreed and I led her in a prayer of recommitment.

It seemed only fitting in a restaurant that specializes in serving fresh fish that we not let this one get away as we went “fishing for men.” After we prayed, she said, “I feel so much better!” I responded, “Now come to church this Sunday as a newly committed Christian. I’ll see you there!”

Not long ago I read the story of a fisherman who was testing an outboard propeller on a lake in Ohio a number of years ago. There, in a cove, he saw a giant muskellunge fish lurking near the surface. The fisherman motored toward it and cast unsuccessfully several times before the fish disappeared. A half hour later he returned to the cove where he first spotted the big muskie. It was back!

From Outreach Magazine  Why Testimony Is the Spark of Revival

The fisherman turned on the electric trolling motor and headed toward the beast. As he crept closer, the massive fish suddenly started swimming toward the boat. The fisherman quickly put on a leather glove and plunged his arm into the water, grabbing the fish behind the gills. The fish started thrashing and twisting. The fisherman was having trouble lifting the huge muskie onto the boat. Fortunately, a nearby fisherman came over to help, and they were able to wrestle the monster into the fisherman’s boat.

The muskellunge weighed more than 53 pounds. If he had used a rod and reel, it probably would have broken the record for the biggest muskie ever caught in Ohio. When asked about his fish, the man said, “I was at the right place at the right time, and I was fool enough to grab it.”

That’s the same attitude we should have in “fishing for men.” Being at the right place at the right time, and being “fool enough” to take a risk, and share the gospel!

Greg Laurie is the senior pastor at Harvest Christian Fellowship in Riverside and Irvine, California, and founder of Harvest Crusades, large-scale evangelistic events that are held across the world. This article is excerpted from Tell Someone: You Can Share the Good News by Greg Laurie. Copyright B&H Publishing Group 2016.

Check out Outreach magazine’s interview with Laurie, “Tell Someone!” »