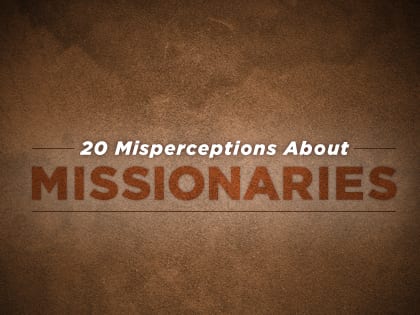 “Missionaries are regular people answering God’s call to do work across cultures. They don’t want to be heroes.”

They’re not, they told me. They’re regular people answering God’s call to do work across cultures. They struggle with sin. Their families have arguments. Their kids drive them crazy some days. Missionaries don’t want to be heroes (though they often appreciate the affirmation they get).

Missionaries live all over the world, many in megacities where millions of people live.

“Home” for missionaries is where they live. The place they reside, and the people they’re seeking to reach, become part of them. Coming to the U.S. can, in fact, be stressful. I’ll always remember one missionary who called me from Wal-Mart, completely stressed because the vast numbers of cereal options overwhelmed him.

This misperception relates to No. 3 above. Missionaries come back to churches that are often more elaborate, supermarkets that are much more “super” and missionary homes that are much bigger than what they have where they live. Often, they don’t know the newest praise choruses or recognize the latest sermon illustrations. Reverse culture shock is real for them.

5. “Your short-term mission trip is a great blessing to us.”

It can be, but not always. If your team doesn’t work with the missionary from the beginning—or if you ignore the missionary on the ground to form your own plans—you can make the missionary’s task much harder. Ask how you can help the missionaries rather than telling them what you plan to do.

6. “Our life is just a longer short-term mission trip.”

One missionary put it this way: “On a short-term mission trip, you basically do ministry from sun up to sun down. You don’t negotiate with a landlord, struggle with buying groceries and cooking food, homeschool your kids, or stand in long lines to pay a $2 bill. Living overseas requires a lot of effort just to live.”

That’s not the case. Language learning is difficult, and even those who know the language well might still struggle. Some long-term missionaries never fully master their language—but they press on because they want to share the gospel with their people group. Language learners need our prayers.

Not only is it hard to move a conversation to the gospel, but missionaries must also do that in a second language. Even those believers who go to the ends of the earth still wrestle with engaging somebody with the gospel.

From Outreach Magazine  The Informal Economy of Church Planting

Not so. They’re serving God, but we need to treat them as worthy of their hire. In fact, some missionaries live in places where the cost of living is quite high.

Many are still waiting for someone among their people group to follow Jesus. Some are themselves struggling to find daily joy. Missionary living is not always on the mountaintop.

Missionaries are faithful people, but fear can be a reality. Depending on where they serve, they may face public opposition, violence, threats, natural disasters and strange illnesses. Some live continually ready to flee their area if necessary.

12. “We don’t need support from our home churches.”

Many missionaries look forward to encouragement, support, relationships and visits from the churches that sent them. They recognize it when churches seem to have forgotten them.

13. “Saying ‘goodbye’ gets easier over the years.”

Returning missionaries may look the same, but they’re different. Their experiences on the field change them. Temporary stuff that used to matter doesn’t matter so much any more. Big church buildings no longer impress them. Church conflicts seem foolish now. People matter.

15. “We stay on the field because we love our people group.”

From Outreach Magazine  Kevin Peck: 'The American Church Has a Profound Opportunity'

16. “We can’t wait to speak energetically to your church when we return to the U.S.”

They really do want to tell you what God is doing through their work, but they’re usually returning after several years of hard work with few breaks. They’re tired. They’re facing their own culture shock. Some are also not naturally gifted to speak to large crowds.

17. “We don’t have time to hear your prayer concerns.”

Sure, missionaries want us praying for them … but they equally want to pray for us. Some of my missionary friends are the best intercessors I know.

They’re never alone because the Spirit lives within them, but missionaries can still be lonely. Some serve in isolated places with no other believers within days of them. They long for their families, especially when they miss weddings and funerals; in fact, they’re often as close to their own families as others who’ve said to them, “I could never do what you do because I’m so close to my family.”

Many missionaries work hard to send well-crafted, concise accounts of God’s workings and their prayer concerns. Because of technological resources available today, they can know how many people actually open their newsletters and read them. Don’t discourage them by ignoring their news.

20. “Our greatest conflicts come with nationals.”

I’m sure I have my own misperceptions about missionaries, but I don’t think I’m wrong about this conclusion: they are godly people who serve faithfully around the world. Let’s learn about them, listen to them, pray for them and walk beside them.

And maybe even become one of them.