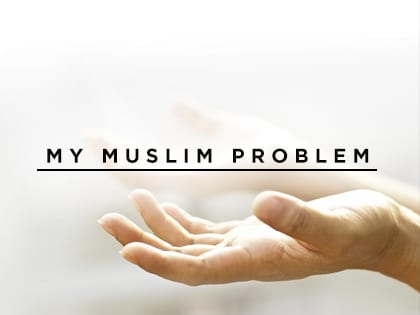 I have a Muslim problem.

I am a Christian pastor in North Texas. I am also the proud son of a Muslim immigrant from the Middle East, and I have a very wonderful—and large—Muslim family.

This is a problem, because when I hear about San Bernardino, or Manchester, or any other terror event, my first prayer is to hold my breath and hope the killers do not have names like mine.

This is a problem because down the highway from me some men with guns protested outside a mosque, then posted the names and home addresses of local Muslims online.

This is a problem because a brother in Christ, and president of a large Christian university, received thunderous applause when he told his student body to get guns and help end Muslims before they kill us.

This is a problem because our president, along with the son of an iconic preacher, called for Muslims in our country to be tracked, data-based and banned from coming into the country, with both looking to the U.S. treatment of Japanese during World War II as inspiration.

These stories frighten me, but they do not cause shock and awe. I’ve heard this kind of rhetoric spoken beneath the public surface most of my life. Like the one time, somewhere between 9/11 and the invasion of Iraq, when I received an email from a friend in ministry. It was a joke that read something like this:

I reminded him of my family’s background, and told him I found the joke theologically tasteless and unfunny. My friend said he understood, but “we’re at war,” and as a Christian I should be more concerned with being on “God’s winning side.”

This is a problem.

In seminary, after I gave a talk in chapel about this subject, another pastor came up to me and said, “I’ve always hated Muslims. I’ve never led my congregation to pray for them as humans.” So goes the trend in some churches and politics of painting Muslims as the other: a-less-than-human without a face or a story … or only a story veiled in hate and violence.

But a trip through my family’s reunions, Skype calls and Facebook feeds tells more common Muslim stories: my retired uncle who lives with his kids and grandkids near the beach; my cousin who just graduated college and started her first job; her mom who also went back to school and finished her degree; one has a new girlfriend; another can’t stop posting about his favorite football team tanking their season; many came together this fall from around the world to celebrate a wedding … some had not seen each other in years, while others met for the first time.

They are Muslims who are falling in love and having a first kiss; trying to get an education and looking for jobs; wanting to have families and buying homes; celebrating the birth of a child and suffering the loss of loved one; playing video games and going on vacations.

In other words: common human stories.

The Christmas story reminds us God is redeeming all our little human stories into his great divine story through Jesus Christ. This is the good news of the gospel. The nature of Jesus’s incarnation—God becoming human to be in relationship with each of us—puts us face-to-face with real people with real stories. When we choose to distort, ignore or not enter into another’s story, we deny the incarnation.

I get the fear of terrorism. Part of my family’s story includes those living as refugees in foreign countries, mourning the memory of a loved one shot to death because of religious and ethnic extremism.

From Outreach Magazine  Youth Ministry Hindsight: You Can't Do It Alone

And I have fears, too. I fear what the rhetoric of “track and ban” could lead to, because history’s darkest ethnic atrocities started with this kind of talk. And I’m afraid, because of our current climate, that someone will hurt my wife or my girls because our name sounds like those terrorist names.

Yes, there are Muslims who commit horrible acts of violence. But violence is not unique to Islam. It is common to all humanity. In our fallen depravity, all of us are radicalized by sin.

This is not a Muslim problem.

This is a human problem.

We need to get our stories straight, because the gospel of Christ does not discount anyone from grace and salvation—even terrorists. Take Paul, who started out as a religious militant, overseeing the execution of Christians he saw as infidels because he thought that put him on God’s winning side. He went on to become the author of most of the New Testament.

If I believe in prevenient grace—that Jesus is pursuing every person—I can only know what he’s up to by entering into another’s story through his holy love. How can I join in if I am running in fear from, discounting and demonizing those made in the image of God?

This is a problem for me, because it means I cannot dehumanize the politicians, preachers and even friends who dehumanize my Muslim family. I cannot become a monster to defeat a monster.

Omar Rikabi was born in Houston, Texas, to a Muslim father and a Christian mother, and was raised a Christian in a suburban Dallas Methodist church. He currently serves as the pastor of First United Methodist Church in Heath, Texas. This article was originally published on Rikabi’s blog, Firstborn Stories.