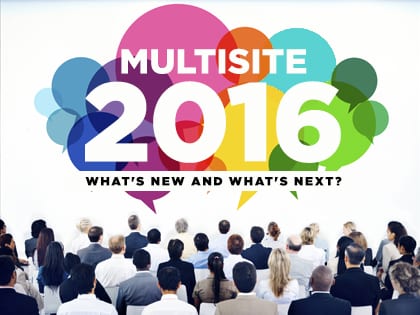 Emerging trends from a dynamic movement in its third decade.

This radical idea has spawned a movement of more than 5 million people attending one of the 5,000+ multisite churches across North America and it is not slowing down. This game-changing movement is comprised of nondenominational and denominational churches that gather in urban, suburban and rural communities. Here are some trends emerging out of this dynamic movement now in the middle of its third decade.

Movement is the New Radical

The multisite movement is standing at the frontier of another paradigm shift. A small but growing number of radical multisite churches are going beyond adding one or two campuses, to multiplying exponentially in fulfilling Jesus’ call to make new disciples. There is an explosion of church network movements through multisiting and church planting that will have the strength of centralizing resources without the bureaucratic weight of past denominations. These radical multisite churches are operating out of a multiplication culture that is reproducing disciples and campuses at an accelerating rate. These radical churches are led by leaders with an apostolic impulse who birth multisite campuses, plant churches and keep a multiplication scorecard. Some have the potential to become a movement-making multisite church.

Microsites Are the New Big

Microsites are best described as the cross between multisites and house churches, but this is not a throwback to the anti-church house-church movement of the past, but more about taking church further, faster and cheaper than the typical big-box multisite strategy. Micrositing is a missional small group, outreach strategy that utilizes video worship and sermons to extend the reach of a church. They meet in homes, retirement centers, homeless shelters, bars, gyms, AA clubs, businesses—any place a small group can gather. It is more than a small group, but less than a fully functioning congregation. They tend to be video-based and centrally governed with the ultimate goal of becoming a full-blown congregation.

From Outreach Magazine  Why Design Matters When Building a Church

Mergers Are the New Normal

Church mergers are occurring in an unprecedented way today and becoming a viable option for healthy as well as stuck or struggling churches. These mergers are more mission-driven and future-focused as opposed to the failed mergers of the past that were more survival-driven and focused on preserving the past. Progressive denominational leaders are seeing the opportunities to grow their strong churches and salvage their struggling churches through mission-driven multisite mergers. Church planters are acquiring permanent facilities and church growth through a merger. A growing number of churches have experienced senior pastor succession through a church merger. Mergers that have a multisite outcome report a higher success rate and satisfaction factor than mergers that unite into one location.

Online campuses are interactive virtual church experiences that are becoming the norm for multisite churches that are tech-savvy and outreach oriented. With globalization through the Internet and the explosion of social media, online campuses are becoming fully integrated into the life and strategy of local churches. No longer a techie experiment, online campuses function more like a multisite campus with a dedicated campus pastor, multiple experiences throughout the week and lots of volunteers.

Churches are changing their name because it either has cultural baggage or it is geographically limiting for a multisite strategy. These new names are typically shorter and without a denominational label.

Constitution and Bylaws Are Changing

With the increase of larger churches, church mergers and church name changes, churches are discovering that their constitution and bylaws are woefully antiquated and outdated. Even though changing constitutions and bylaws can be very contentious, more churches are rewriting their bylaws to accommodate the new realities of the 21st century.

Churches Are Getting Bigger

How is the multisite movement changing your church?

Jim Tomberlin is founder and senior consultant of MultiSite Solutions, a company dedicated to assisting churches in maximizing their redemptive potential through intensive and insightful multisite and church merger consultation. He is the author of 125 Tips for MultiSite Churches; Better Together: Making Church Merger Work; and Church Locality: New Rules for Church Buildings in a Multisite, Church Planting and Gigachurch World.