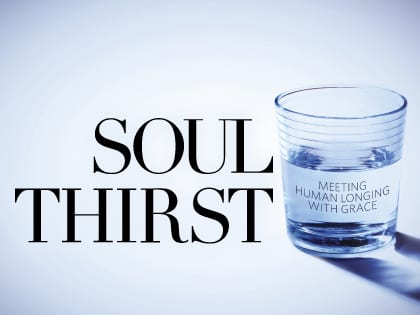 “The soul knows for certain only that it is hungry. … A child does not stop crying if we suggest to it that perhaps there is no bread. It goes on crying just the same.”
—Simone Weil

I’ve referred to my book group friends, who view Christians mainly as a political voting bloc. In 10 years of regular meetings only twice have they shown an obvious interest in matters of faith.

One evening Josh told us about his sister, now a Tea Party evangelical living in Virginia. She had been a drug addict, unable to hold a job or keep a marriage together. “Then one day she found Jesus,” Josh said. “There’s just no other way to put it. She changed from night to day. Her ideas drive me crazy, but I can’t deny the change in her life. She had tried every kind of rehab and recovery therapy and nothing else worked.”

Later in the evening Josh asked me in private to recommend some books that might explain the Christian faith in a way he could understand. “My sister sends me books that are totally unconvincing,” he said. “They seem written for people who already believe them. Would C.S. Lewis be appropriate?” I smiled approvingly and went to my bookshelves to pull out a few.

Another time, quite to my surprise, the Marxist professor asked my advice on versions of the Bible. He had decided to buy one and read it all the way through, Genesis to Revelation. “That’s quite a goal,” I said. “What prompted it?” I knew he had been battling prostate cancer for several years. Recently, he explained, doctors had informed him he was approaching the end of his life. In the few weeks or months left to him, he wanted to revisit with mature eyes the faith he had abandoned in his youth.

We talked several times before he died. “I agree with you on the questions,” he said. “I just can’t agree on the answers.”

The questions—universals, what we all have in common—are a good place to start in communicating the good news.

Thomas Merton wrote in his journal, “In fact, spiritual dryness is one of the most acute experiences of longing we can have.” I look inward at my own spiritual thirst, and think also of people I know. What are the symptoms? A restless search for pleasure, fear of death, boredom, addiction—any of these can betray a longing that is at root spiritual, the cries and whispers of someone who has lost the way.

How differently will I relate to the uncommitted if I view them not as evil or unsaved but rather as lost. For some that word summons up scenes of revival preachers who fulminate against “the lost.” I mean it in a different, more compassionate sense. Several times while hiking in the mountains of Colorado I have missed markers along the trail and have wandered off course. I stare in confusion at my map and compass, trying not to panic. Already I’ve wasted precious time and energy, and I know the dangers of spending the night unprepared in a high-altitude wilderness. At last I see another hiker and call out. When I reach him, he kindly takes my map and shows me where I am and where I need to go. Anxiety fades as I realize I’m no longer lost. I know the way home.

I must say, though, that I’ve also found unexpected treasures on those mountain detours, views and discoveries that few other hikers get to experience. Once I know I’m safe, I can look back on my hours of lostness as an adventure one I can learn from. Strangely enough, some of the scariest times, such as when I “cliff out” and can’t find a way down, become the stories I like to swap with fellow climbers.

“While none of these displacements was pleasant at first, I would not give a single one of them back. I have found things while I was lost that I might never have discovered if I had stayed on the path. I have lived through parts of life that no one in her right mind would ever willingly have chosen, finding enough overlooked treasure in them to outweigh my projected wages in the life I had planned. These are just a few of the reasons that I have decided to stop fighting the prospect of getting lost and engage it as a spiritual practice instead. The Bible is a great help to me in this practice, since it reminds me that God does some of God’s best work with people who are truly, seriously lost.”

In my lifelong study of the Bible I have looked for an overarching theme, a summary statement of what the whole sprawling book is about. I have settled on this: “God gets his family back.” From the first book to the last the Bible tells of wayward children and the tortuous lengths to which God will go to bring them home. Indeed, the entire biblical drama ends with a huge family reunion in the book of Revelation.

Many of Jesus’ own stories center on the theme of lostness, captured most movingly in the parable of the prodigal son. Jesus’ tales of lostness—a coin, a sheep, a son—make two important points. First, the lost are a high priority, worth whatever effort it takes to find them, even if it means leaving the 99 to search for the one. Second, when found, the lost deserve to be celebrated. “This brother of yours was dead and is alive again; he was lost and is found,” cried the joyful father, defending his open arms of grace before the resentful older brother.

The stories were a threat to the Pharisees, who were content to shun the lost and associate with other Pharisees, gaining status by following familiar rules. And they are a threat to me for I, too, prefer the comfort of predictable religion to the messy business of seeking the lost. The parable of the prodigal son, especially, tears down my neat categories that separate responsible from irresponsible, obedient from rebellious, moral from immoral. Such is grace.

From a stream that runs outside my Colorado home I have a constant, startling image of God’s free gift of grace to the undeserving. Like water, grace always flows downward. The stream that begins as a rivulet in a melting snowfield at the top of a mountain trickles down to form runnels, then lovely alpine lakes, then a roaring river and finally a wide blue lake. Sometimes I think of the hymn “There’s a Wideness in God’s Mercy” when I pass that lake.