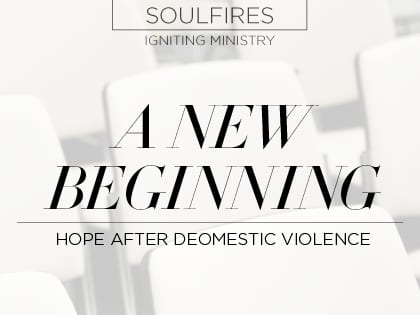 One victim of domestic violence finally finds a new beginning—and an unexpected ministry—through the love of her Father.

It was 6:45 p.m. Jessica arrived at the room on the second floor of the church which had been prepared for her ministry’s first meeting, and felt a bit concerned by what she saw. The facilities staff had set about 10 chairs just as she requested, but now that she looked at them, 10 appeared to be too many. Nothing says awkward like two or three people sitting among empty chairs.

She only had the chance to get one tiny ad in the church bulletin before this evening and figured hardly anyone would have seen it. Yes, 10 chairs was overkill.

Just then her volunteer, Marlene, arrived. They greeted each other nervously and shared a hope-this-goes-well look.

Noticing 7 o’clock was fast approaching, Jessica said, “I guess we should pray.”

“Would you mind?” Jessica asked, a bit overwhelmed by her new role as leader of a ministry based on the life and teaching of Jesus Christ. It was all so surreal.

“Not at all,” Marlene said, jumping at the chance to pray.

Jessica closed her eyes, took a deep breath and in the process, her mind drifted a bit. It had been a long, unthinkable road to this leader’s seat. It was a path she would have never chosen in a million years.

The day in 1981 that Mr. and Mrs. Yaffa, from Los Angeles, Calif., first brought home their baby boy Sam, 6-year-old Jessica was elated to see him.

“What do you think?” her mom asked excitedly.

“I like him!” she responded, with a gigantic smile. He sure was cute.

Of course, Jessica’s father was thrilled. The problem for Jessica was that as the months went on, her father never seemed to come down off his initial thrill. She noticed that all the wide-eyed joy that seemed to be reserved for her in her first six years had shifted to Sam, as if she had been forgotten. With seeming disregard for her, Jessica’s dad played with Sam, sang over Sam, lifted him high in the air, giggled with him and carried him everywhere they went. He put Sam in his crib at night. He gathered him up first thing in the morning. He fed him, kissed him, cherished him.

All the while, Jessica simply watched.

Had it been another little girl, it could have resulted in merely discouragement or a life of quiet rejection. But Jessica was different. In her, the rejection was like high-octane gas in an engine. Jessica’s body, mind and spirit began charging toward a goal, led by a solitary motivation: to win Dad back.

Dad filled her thoughts during the day, was on her mind as she went to sleep. Dad ambled through her dreams, and was the first thing she thought about in the morning. She tried to get his attention with good grades, good marks in Hebrew school, by being cute and funny, doing well in softball, getting her dad’s slippers and a drink when he came home—or by acting out, throwing fits or beating up Sam. But nothing worked. In fact, as Sam grew older, his beyond-his-years intellect only seemed to heighten her dad’s excitement for him—and disinterest in her. Jessica concluded she was dumb, talentless and ugly.

By the time Jessica was in high school, she noticed a strange fatigue, as if her mind hadn’t been shut off in years. She had been running in high gear for more than a decade—a full sprint chasing of the wind. She was 16 years old and exhausted.

And still she couldn’t turn it off.