Home Features What Does Courageous Leadership Look Like Today? 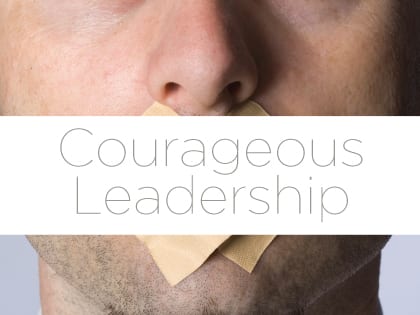 Why hope, humility and wisdom matter in a godless culture.

Years ago when I spoke of “courageous leadership” I typically meant the willingness of a pastor or leader to take risks, defy conventional wisdom or stand up to cherished, but no longer useful, traditions.

Today, “courageous leadership” has taken on a new meaning. It no longer simply refers to leading our congregations through much-needed, but fiercely resisted, change. It now includes leading them through a gauntlet of cultural and legal landmines resulting from an increasingly hostile spiritual environment.

If you haven’t noticed, the former “silent majority” has become the “silenced minority.” Those of us who dare to publicly espouse or live by biblical values often face a fierce backlash. We’re blackballed, boycotted or labeled as dangerously backward for holding views that until recently were considered mainstream and widely accepted by both Christians and non-Christians alike.

Unfortunately, fear, frustration and anger don’t foster a heart for the lost. Instead, they turn our focus inward, toward self-preservation, something that can be seen in our current tendency toward two extremes: isolation and warfare.

The problem with isolation is that it separates us from the very people we’re called to reach. It puts up walls where we’re supposed to build bridges. The problem with warfare is that it turns our mission on its ear. Instead of seeing the lost as victims of the enemy, they become the enemy. They become adversaries to be overcome, rather than captives to be rescued.

As pastors and leaders it’s our job to point our people toward a better way. When despair runs rampant, we must proclaim the certainty of biblical hope. When anger reaches a boiling point, we must call for Jesus-like love and humility. And when everything becomes a battleground, we must show them how to pick their battles wisely.

That’s not easy to do. But it can be done. And a man named Daniel shows us how.

A number of years ago I took a deep dive into the life of Daniel. I wanted to see what I could learn from his example of courageous leadership in a godless society. I found a goldmine of wisdom and encouragement. Much more than I expected.

From Outreach Magazine  How Churches Are Different Than Cafeterias

Growing up around the church, I had always thought of Daniel as an adventure story for kids. It was a Sunday school teacher’s best friend, filled with tales of hungry lions and fiery furnaces.

I didn’t realize that it was actually written for adults; that it contained a game plan for thriving and glorifying God in the most godless of environments.

As our culture has moved from a begrudging support of biblical values, to benign indifference and finally to outright hostility, I’ve found the lessons of Daniel to be increasingly valuable.

They’ve provided a powerful counterbalance to the kneejerk fear that comes with unwanted change. Better yet, they’ve given me a template to follow as I seek to guide the congregation I serve toward engagement and evangelism rather than isolation and warfare.

Here are the most important lessons I’ve learned.

Fear is contagious. That’s why as a pastor and leader I must constantly steer my congregation toward biblical hope and the confidence that it produces.

When a crisis hits, people instinctively look to their leaders to figure out how bad things are and what to do next. If you’ve ever been in an airplane during severe turbulence, you probably immediately looked at the flight attendants to determine if something was drastically wrong or it was merely a bumpy ride. One look at their countenance told you all you needed to know.

It’s the same in our churches. When all hell breaks loose our people look to us to determine if it’s time to panic or not. If our sermons are angst-filled, our public responses overwrought and despairing and our demeanor defeated, they’ll lose hope. But if the gospel, rather than the news cycle, remains front and center, they stand strong in their hope. It all depends on what they see and hear from us.

Our people don’t need another hand-wringing recital of all the ground we’ve lost. They know that already. They need a reminder that God is in control of who’s in control. They need to remember that we win in the end. Guaranteed.

In other words, they need Daniel-like hope, the kind of confidence in God’s ultimate control that led Daniel to begin his story of Jerusalem’s fall and the sacking of God’s temple with these simple words: “The Lord delivered Jehoiakim king of Judah into his hand, along with some of the articles from the temple of God.”

This is not to say that a crumbling society is nothing to worry about. It’s not to say we should stick our heads in the sand and ignore the obvious. It’s simply to say that our sermons, hallway conversations, blog posts and the emails we forward to others should reflect our theology, not our fear.

The second lesson that Daniel taught me is the power of humility. It opens doors that would otherwise be closed.