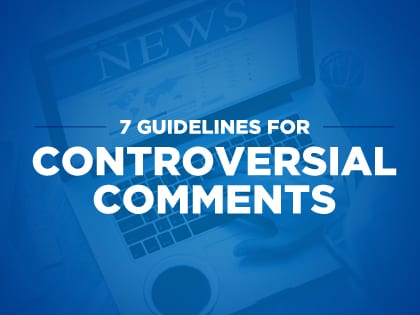 Ministry leaders are often called upon to comment on racial, socioeconomic and political tensions. How should we respond?

On Nov. 20, 2014, President Barack Obama announced a decision to take executive action affecting millions of undocumented immigrants residing in the United States. Then, just four days later, a grand jury in Ferguson, Mo., released its decision exonerating officer Darren Wilson of any culpability in the fatal shooting of Michael Brown. Not surprisingly, in both instances, social media erupted in a firestorm of polarized opinion, pain and outrage. And into these waters jumped Christians, everywhere: pastors, professors and parishioners, bloggers, authors, journalists, community organizers and activists, alike.

As the pastor of a multiethnic and economically diverse church, I, too, felt compelled to speak, hoping to help mitigate extremes and promote peaceful dialogue. On November 24, 2014, I posted the following to Facebook:

For the pastors and people of multiethnic churches a convo on race does not start tonight; it remains ongoing, as does our love for one another, beyond the distinctions of this world that so often and otherwise divide.

As seemingly benign as this statement was, however, a few people left my church in the weeks following, in one way or another “sick and tired of talking about race.” Many other pastors I know experienced the same thing.

Pastors and ministry leaders are increasingly confronted with and expected to comment on racial, socioeconomic and political tensions affecting our country, our churches and even our doctrine. Yet in acknowledging pain, providing perspective and promoting peace from the pulpit or via social media, we are often misinterpreted, misrepresented and misunderstood by some within our own congregations, by our closest friends, even by our own families.

So, how should pastors and ministry leaders respond to such issues and situations when they arise?

From Outreach Magazine  Focus on One House

1. Offer a fair and balanced perspective.

Remind people to not merely look out for their own personal interests, but also the interests of others (Phil. 2:4). That said, do not feel as if you must speak to every issue or situation that arises.

2. Take time to measure your words.

This helps avoid misunderstanding. In other words, do not assume your heart and motives will be perceived by readers. In cases where there is a greater risk or potential for misstep, first run your thoughts by a spouse or trusted colleague before making them public.

Similarly avoid endorsing the extreme opinions or positions of others, one way or another. More often than not extreme positions are driven by personality, personal preferences, past pain or experiences that can keep people from a more balanced, productive discussion.

4. Lead others to pray for “kings and all those in authority.”

Interestingly this is the only beatitude in which the reward is identification with the Son of God; and the only one followed by three verses of explanation, expecting persecution (Matt. 5:10-12). Stated another way, do all you can to avoid fanning the flames of division.

6. Make substantive or systemic change when and wherever necessary.

Mere words or pithy statements apart from such change will likely ring hollow, hypocritical or disingenuous. As in politics, remember that all crises are local. In other words, while it’s easy to opine from a distance, the people you lead will be more interested to know what national concerns mean for them personally, locally and for their church.

From Outreach Magazine  The 7 Secrets of True Significance

Work to build congregations reflect the increasing diversity of our communities and our country to advance a credible witness of God’s love for all people, the gospel of Jesus Christ and, consequently, as an answer to the problem of race in America.

In the midst of tension, turmoil or tragedy connected to race, class or gender, let us strive to lead others—where there is injury, to extend pardon; where despair, to advance hope; where darkness, to bring the light; wherever hatred, to sow love—as did Francis of Assisi, as did Teresa of Calcutta, as does our Lord and Savior, Jesus Christ.

ABOUT US
Sharing stories of outreach, helping Christian leadership discover the ideas, innovations and resources that will equip them to advance the kingdom of God through the outreach efforts of the local church.
Contact us: [email protected]zine.com
FOLLOW US
© Copyright - Outreach, Inc