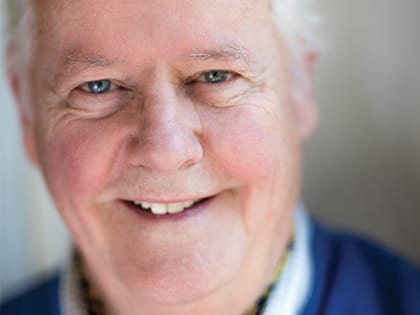 “Sadly, I have now seen countless churches who seem to have lost their first love for reaching out with the gospel.”

Os Guinness’ life and career as a Christian apologist, social critic, speaker and author has spanned the rise and growth of Christian engagement with modern and postmodern culture. In the late 1960s, Dr. Guinness worked alongside Francis Schaeffer at L’Abri. In the ’70s he deepened friendships with luminaries like John Stott and studied sociology under Peter Berger at Oxford University. In the ’80s he moved to the United States, serving as a scholar at the Woodrow Wilson Center and the Brookings Institution and founding the Trinity Forum, all the while writing scores of books that explained Christianity to the world and the world to Christians.

His latest, Fool’s Talk: Recovering the Art of Christian Persuasion, is an appeal to the church to recognize the way it communicates the gospel to a post-Christian world—when and if it does—is largely not working, and to return to personal advocacy driven by love and listening.

You come from a branch of the Irish brewing family sometimes dubbed “Guinness for God.” How did you personally come to faith?

I was born in China, where my parents were medical missionaries, but after the revolution in 1949, my parents were placed under house arrest in Nanjing, China, and I was sent back to a boarding school in England. I was on my own, with my parents on the other side of the world, and my own journey to faith was partly through a friend and partly through a great debate in my mind. On one side, I read such atheist writers as Nietzsche, Sartre and Camus, and on the other, Christian writers such as Pascal, Dostoevsky, G.K. Chesterton, T.S. Eliot and C.S. Lewis.

In the end I committed my life to God when I finally became convinced that the Christian faith was not merely the most meaningful faith, but true in the most rigorous sense. Ever since then I’ve had a passion to make sense of the faith to those outside the church, and also to make sense of the world to those inside the church. If you put that into two words, my calling has been to apologetics and analysis.

You came of age during the 1960s when everything in Western culture was being questioned. This was when you met Francis Schaeffer, wasn’t it? How did this period influence your thinking?

I experienced a tremendous surge forward in faith when I was a student at London University. We had magnificent Christian teachers, such as John Stott and Martyn Lloyd-Jones. But while they were magnificent in terms of theology and biblical exposition, they had next to nothing to say about the culture.

That was when I first met Francis Schaeffer, in London. He was a little-known American missionary to Switzerland, and at first sight an unusual man, with his goatee and Swiss knickers. But what stood out was that he was able to relate his faith to anything and everything, and connected the dots between all the crazy events then going on.

I was highly intrigued and later went out to L’Abri, in Huémoz, Switzerland. My first three weeks there were probably the three most revolutionary weeks of my life in terms of my beginning to appreciate the explosive significance of the Christian faith and its relevance to our modern world. That was also the place and time where I was introduced to the vision of apologetics that I have tried to capture in Fool’s Talk.

Those three weeks grew into three years with the Schaeffers. What did you do next to expand your understanding of Christianity and how it can and should speak to all aspects of culture?

It was such a formative time in my life that I knew I needed to pursue doctoral studies to be able to deepen and digest all I had come to see at L’Abri. So my wife and I moved to Oxford University so that I could do a DPhil.

When I first came to faith, the apologetics to which I was introduced to was relatively simple and mostly evidentialist. In other words, it was often little more than “1001 reasons why Jesus rose from the dead.”

What I learned from Schaeffer was far more profound theologically and always related to the day’s culture. So I owe Francis Schaeffer a huge and unpayable debt. At the same time, Schaeffer’s great strength was in the history of ideas but I realized that many of the challenges of the modern world come from sources that are much wider than ideas.

So at Oxford I added the tool of the sociology of knowledge in order to be able to analyze the modern world. Of course, both tools are needed. It is not either/or. But Oxford and Peter Berger were my complement to L’Abri and Francis Schaeffer, and I owe a debt to them all.