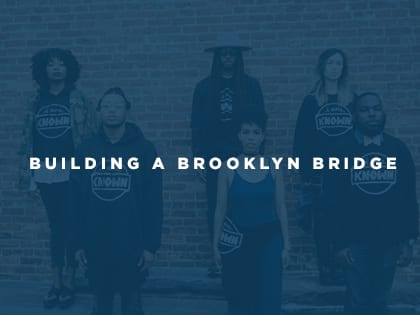 The Bridge Church unites a primarily unchurched community through small groups and other initiatives.

The Church: The Bridge Church in Brooklyn, New York
The Challenge: Planting a church among a primarily unchurched population.
One Big Idea: Unite the community through “City Group” Bible studies and other ministries.

In 2013, Pastor James Roberson; his wife, Natarsha; and their daughters were living a happy, comfortable life in Atlanta, Georgia, when he said, “I feel a call to plant a church in New York.”

“Where in New York?” Natarsha asked with trepidation.

James had no clue.

With no plan in mind—only a poignant pressing on his heart—in February 2013 the family moved to the Big Apple, where James proceeded to prayer-walk the streets of Brooklyn daily.

One day he found himself in front of a church near the Barclays Center, home of the NBA’s Brooklyn Nets. He went inside and introduced himself to the pastor, who graciously invited Roberson to lead a Tuesday-night Bible study at the church. At first, just a handful of people showed up.

“It was very humble beginnings,” recalls Roberson, who asked group members what it would take to get their friends and co-workers to attend. They said a frank discussion about love, sex and dating would be the draw. So, Roberson hosted an event where he delivered a 15-minute message and then answered questions about the Bible regarding sex and relationships.

“We were blown away because 120 came that night—mostly young, unchurched professionals who had a genuine interest in learning about God,” says Roberson. “After that night, the Bible study quadrupled in size.”

In April 2014, Roberson launched The Bridge Church—a name he had picked to reflect the church’s purpose. “The whole point of a church,” he says, “is to reach people.”

“It’s about feeling the heartbeat of the city though discipleship,” says Edney. “We wanted people to be able to take Sunday’s sermon, discuss it in a family context and share God’s Word with the community.”

The church’s mission statement involves connecting to God, growing as family and serving the city. To fulfill that mission, they’ve grown several ministries, including the “Do Justice” and “I Am Known” initiatives.

Shootings around the country led to the formation of “Do Justice.” What began as a way for people who felt afraid and confused to process these events has become a means of improving community relations with the police.

In addition, the church designed sweatshirts that say “I Am Known,” which they distribute to the homeless community to let them know that they are seen, heard and loved by God. The first winter they gave out 250 sweatshirts. In 2016, they distributed 425. This past winter, the number grew to 700.

Because most of Brooklyn is immigrant-based, the 155-member congregation is primarily made up of millennials from Caribbean countries.

From Outreach Magazine  How to Stop Being Ruled by Shame

“We always strive to be culturally relevant and doctrinally sound,” says Roberson. “And while we don’t use the culture as a litmus test for what to preach about, we do use the Word of God as a vehicle to discuss what’s happening in society.”

For both Roberson and Edney, the greatest reward from planting The Bridge Church has been witnessing life change. For instance, they speak of Jorge Maldanado, a Puerto Rican who abandoned God as a teenager, and Maximilian Hernandez, a half-Cuban/half-Jewish man raised in an unchurched Puerto Rican household. Both men lived faithless lives plagued by internal struggles until they found Christ, who filled them with love, hope and mercy.

“I have contemporaries who go to Puerto Rico and France. I may not get to visit these beautiful locales, but you know what I do get to do? Baptize Jorge and Maximilian,” says Roberson. “Seeing people go from being far from God to serving God is the most satisfying thing in the world.”