Home Features Korea: Why So Many Megachurches? 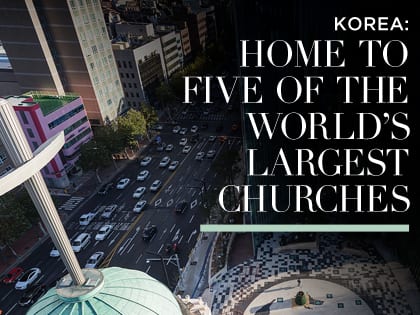 Korea: about the land mass of Kentucky, yet home to five of the world’s 20 largest congregations

David Yonggi Cho was born Buddhist. When he was 17, he became gravely ill from tuberculosis but subsequently recovered. Attributing his healing to the God of Christianity, he became a Christian. After working as an interpreter for an American missionary and later for a Korean healing evangelist, he attended the Korean Assemblies of God Bible School. In 1958 he and his future mother-in-law founded a small church that grew to 300 in three years. It kept growing and by 1968, worship attendance was more than 10,000. In the years to come, South Korea’s Yoido Full Gospel Church became the world’s largest-attendance congregation. Thousands of Christian leaders from North America, Africa, Europe and Australia trekked there to understand better the new thing the Holy Spirit seemed to be doing.

Korea is about the land mass of Kentucky. Yet it’s home to five of the world’s 20 largest congregations, including the world’s largest Assembly of God, Presbyterian, Methodist and Baptist congregations, plus dozens of other churches that each draw more than 2,000 worshipers weekly. But Korean churches didn’t start setting size records until the 1960s.

What We Can Learn From Korea?

Today, Korea has one of the highest concentrations of megachurches, far more than neighboring countries like India, Japan or the Philippines—each of which has a much larger population—or than European countries where the gospel has been established much longer. Why? Fellow researcher Scott Thumma and I wrote a scholarly article to explain it. The gist: Overall, the global megachurch phenomenon is centered in new urban areas, often with a new and/or rapidly growing Christian population and growing economies, where the gospel addresses pressing social needs and where churches exploit both new formats and new technologies.

All these factors make Korea the ideal setting for megachurches to flourish.

• Social upheaval. Seoul had a population of less than 1.5 million in the early 1950s as it reeled from a brutal war with Japan. However, by 1960 as a free and independent nation, the capital grew to 5 million and today it’s nearly 24 million, encompassing roughly half the country’s population. During this time many new churches were started, and the population shifted from less than 1 in 20 identifying with a Protestant faith to 1 in 4 today.

From Outreach Magazine  Navigating Conflict in the Church

As Yoido Church grew and Yonggi Cho became physically ill trying to do so much of the work himself, he devised an approach to member organization that utilized lay leadership and small home fellowships. This hierarchical network of small groups simultaneously offered a way to provide social intimacy, personal prayer and pastoral care to thousands while also employing volunteer energy from the wives of poor laborers who had recently arrived in the rapidly growing urban area. These women were organized, trained and empowered to be leaders at a time when Korean females had very little power in society. Additionally, this structure provided, in part, an urban replication of the small village system they had recently left.

• Economic boom and upward mobility. South Korea’s gross domestic product per capita has skyrocketed from the 1950s to today, and many who have experienced portions of their nation’s upward mobility credit God’s work in their lives through the gospel. Emphasis on social betterment varies from denomination to denomination, but most would agree that the Protestant work ethic has created a rise in many Christians’ economic circumstances, as has turning from the destructive vices that previously consumed portions of their additional income.

• Leveraging media. Many of Korea’s large churches have invested heavily in television, newspapers and educational facilities as well as retreat and prayer centers. Korean churches employed new technologies for the gospel, being among the first to create satellite venues that used television cameras and large screens to convey the teaching part of the worship service.

• Meeting needs. While a highly-visible few embody prosperity theology, the vast majority of global megachurches proclaim the spiritual message that repenting of sin and trusting in the resurrected Lord Jesus Christ produces hope, healing and help with the daily challenges of life. This message is often a powerful motivation to an unprivileged, struggling working class. Most megachurches grow bigger by becoming smaller through some form of small groups that include both spiritual development and social connectedness.

I visited a number of Korean megachurches during two visits to that country. I was consistently impressed by a commitment to prayer, education and sharing one’s faith. But another striking feature of how Christianity has developed in Korea is their creative use of buildings, often necessary to accommodate as many people as possible on very small tracts of land. Urban congregations might start many stories underground, incorporating parking or sanctuaries there, and then extend upward as high rises. Along the way, they try to convey spiritual values in their property design.

For instance, Oak Han Heum founded Seoul’s SaRang Church in 1978. The church has grown exponentially over the years with over 30,000 attending Sunday services today.

Their current facility is on 1.7 acres of highly restrictive zoning. Dallas-based Beck Group’s innovative design solution placed over 60 percent of the new facility underground including a 6,500-seat sanctuary. Above ground, two curvilinear glass towers connected by a sky bridge provide educational, community and administrative spaces, and a 600-seat chapel. The towers wrap a large fountain-laced plaza inscribed with a world map symbolizing the church’s vision of worldwide Christian work embraced by God and supported by the church.

Whether driving by, flying overhead or coming there to worship, you can’t help but get the message that this church and the God it serves would love to embrace you and welcome you. And that’s yet another reason why so many Korean churches have grown so amazingly.