Home Features The Good Neighbor: Moving Beyond the ‘Christian’ Stereotypes 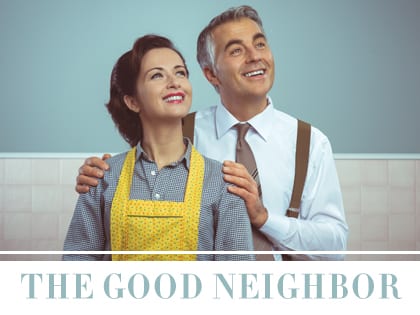 “The gospel is not only good news in and of itself, it is good news because it creates a new people that are good news.”

Evangelism. Few words bring more frustration, consternation and guilt to Christian leaders, and Christians in general. We know we should share the gospel. We want to share the gospel. But how to do so is where we run into problems. Why is it so difficult? And is there a better way than the props, programs and overly “presentationesque” ways of getting the gospel across? Happily, there is. And the answers are myriad and readily available to us all.

I am convinced one of the primary reasons we struggle with evangelism is because we don’t really evangelize. We have not been encouraged to do evangelism in the true sense of the word. Unwittingly we have replaced evangelism with conversionism.

The word evangel is rooted in the word euangelion, which means “good news.” But the gospel we are called to carry and deliver is not just any old good news. It is the good news of the kingdom of heaven. It is the announcement of the ethos, ethics and economy of God’s rule and reign.

Conversionism, on the other hand, focuses primarily on the atonement component available through Christ. The difference in conversionism and evangelism is summed up well in something I once heard Dallas Willard say: “I’m not trying to get people to heaven after they die. I’m trying to get them there while they’re still alive.”

People of the Good News

True and complete evangelism both demonstrates and proclaims the message, ways and means of the Lord’s “kingdom come, will being done, on Earth as it is in heaven.” It certainly includes the good news of Christ’s atoning grace, but it doesn’t stop there. Evangelism happens when God’s kingdom people live as heavenly citizens in earthly places. Literally, evangelism could rightly be called “goodnews-ism.” An evangelist is actually a goodnews-ist.

The gospel of God’s kingdom reign is not only good news in and of itself—it is good news because it creates a new people who are good news. They are good news in their neighborhoods, the places they work and the places they shop and frequent. The great news for many of us is the fun and joyous truth that we all can be evangelists. We have already been sent by the Lord into neighborhoods, workplaces and marketplaces.

In the infamous exchange that ensued with Jesus’ story of the Good Samaritan, Jesus told the lawyer that if he took up the habit of loving his neighbor as he loved himself, he would live. The word live is the Greek word zoe, which refers to the life that comes from God. In effect, Jesus is saying if we want to really live life to its fullest, then we must get serious about loving our neighbors. In the same passage, he goes further to say the real question is not “Who is our neighbor?” but “Who will be the neighbor?” Jesus calls us to be the neighbor. In doing so he invites us into the life of heaven.

Everyone has neighbors. Regardless of the setting—urban, suburban or rural countryside, we all have neighbors. And we are called to love those neighbors as we love ourselves. The deeds that will be produced by that love will come about as we get to know our neighbors and what needs they have. We can’t love people from a distance. It is pretty difficult to love someone in tangible ways if you don’t know them. The knowing part is often the greatest hurdle and barrier for many of us. A lot of us don’t even know one another.

National surveys reveal that less than half of the American populace knows most of their neighbors’ names. It is startling to consider that many people live for years in an apartment complex or neighborhood without so much as knowing the names of their neighbors, much less having an actual relationship with them. American neighborhoods have become collections of disconnected people. If you are a pastor or church leader, just imagine for a moment the exponential opportunities that could immediately take place if your church members actually got to know their neighbors.

Although Americans are the wealthiest people on Earth, we are also the most medicated and therapeutic society in existence. Clearly, the pursuit of happiness has not succeeded. Consumerism has served to feed individualism to the point where the old-fashioned notion of neighbors sharing and caring for one another is rarely experienced.

When I was growing up, if my mother, in the midst of baking, realized she was short a cup of sugar or an egg, her first thought was not to jump in the car and go to the nearest grocery store. She would go next door and ask our neighbor Dorothy if she could borrow the item. If Dorothy was not at home, Mom would go across the street to Janie. Our neighborhood was connected relationally. It was not infrequent that Janie would ask my mom if her little boys, Andy and Joey, could stay with us for an hour or so while she ran an errand, or for my dad and a couple of other guys in the neighborhood to spend an evening or Saturday afternoon helping one another change the brakes on a car. There was an air of interdependence. It seemed to be understood that we all were in life together and that our neighbors were expected to be a part of making life work.

So writes Eugene Peterson in Christ Plays In Ten Thousand Places: A Conversation in Spiritual Theology.

Sent Into the Neighborhood

When my wife and I moved across state from St. Louis to Kansas City, Missouri, several years ago, we came with a mindset that the Lord was sending us into the neighborhood we landed in to be salt and light. The last few years have been nothing short of an adventure in neighboring. We intentionally began not only sharing our knowledge and resources—from gardening to carpentry—but we also asked others to help us and help one another. When we discovered that a retired IRS worker lived on our street, we were able to ask him to help a single mom do her taxes. This not only saved her an outlay from a limited income, it brought great joy to him in being able to help and contribute. It brought joy to our former tax-collector friend. Sounds like a gospel story, huh?

It is amazing what happens when someone is asked to help you or someone else with the skills or resources they have. A sense of purpose and usefulness emerges. Part of helping bring life to a neighborhood lies in mining the resources or wisdom, skill, knowledge and assets on hand.

My daily routine typically begins with time in the Bible and prayer. One morning as I prayed and sipped coffee in my upstairs library, which overlooks our neighborhood, my eyes fixed on a picture on the wall. The photo was of our house in 1940. At that moment I had been particularly praying for our neighbors, house by house. As I looked at that picture—from more than 75 years earlier—the Lord spoke to me. He said, “I’ve been working in this neighborhood long before you came. I sent people way back then to do the same thing I’ve sent you to do.”

From Outreach Magazine  The Difference Between Church Members and Chicken

We have not just “ended up” in our neighborhoods and apartment buildings. The Lord sends his missionary people into cities, towns, villages and Podunk places.

You’ll be known as those who can fix anything, restore old ruins, rebuild and renovate, make the community livable again. (Isa. 58:10-12, MSG)

The mindset of a Jesus follower who believes he or she has been sent to a place causes a different outlook. We believe we are called to not just take up space on a street or in a building. No—we have been assigned to make this place worth living in, to help others make a good life here.

Shortly after we moved into our neighborhood, a young couple moved in next door. Jon and Alissa served as pastors in a local church and felt the same call to the neighborhood my wife and I sensed. It was great to know we were sent together. One of the first things Jon and I did was to begin sharing lawn tools. It didn’t make sense for us each to buy a lawnmower, weed whacker, leaf blower and snow blower. So we went in together on those tools. We eventually began blowing snow from our elderly neighbors’ driveways and sidewalks, and sharing our tools with whomever needed them.

We took notice of Dan, an eccentric old man living behind us, who the neighborhood had labeled as mean and crazy. We approached him, befriended him and invited him for meals on the holidays. We quickly discovered he was neither mean nor crazy. He was just lonely and shut out of the life of the neighborhood by those who had never taken the time nor risk to get to know him. After a couple of years, Shirley, one of our neighbors, told Alissa, “I’m ashamed to say it, but the way all of you have treated Dan has caused me to see him as a human for the first time. I think this is what Christianity is supposed to be about.” Shirley was doing exactly what Jesus said would happen when we become salt and light for our neighbors.

Let your light shine before others, so that they may see your good works and give glory to your Father who is in heaven. (Matt. 5:16)

It is up to pastors and church leaders to open the imaginations of their church members to see the mission field they are currently living in and to recognize the tremendous opportunities at hand to be evangelists. We are God’s good-news people, sent with him, to love our neighbors and neighborhoods with the awesome and abundant love he has poured out on us.

Lance Ford is part of the national leadership team for Forge America Missional Training Network. He is the author of several books, including Next Door as It Is in Heaven: Living Out God’s Kingdom in Your Neighborhood, co-authored with Brad Brisco.