Home Resources Books All Who Have Ears 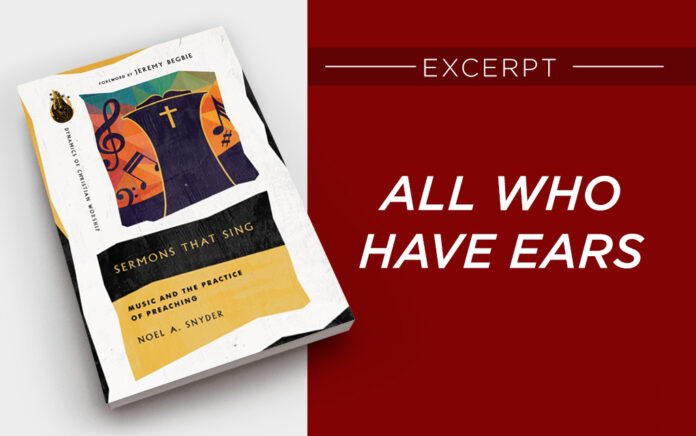 Musicality is a powerful yet underappreciated aspect of sermons.

I was one year into my first pastoral call, and there was a minor controversy developing among the church’s leadership regarding our approach to worship music. Planning worship and providing musical leadership were among my primary responsibilities as associate pastor. Yet I was working within a format that had been developed decades earlier at this church, long before I had assumed this role. Like many churches in the midst of the “worship wars” of the 1980s and 1990s, this congregation had resolved the conflict between “contemporary” and “traditional” worship music by offering separate services featuring each of these styles. Every Sunday morning, there was a first service that was “traditional,” and a second service that was “contemporary.”

When I was beginning my time as worship pastor, many of the staff, elders, and musicians in the church had told me that the distinction between these two services was by no means absolute, since we would regularly sing a contemporary praise song or two in the traditional service and a traditional hymn or two in the contemporary service. Yet the general stylistic distinction between these two services remained, and the senior pastor and I did our best to honor the approach to worship that the church leadership had settled on years before.

Then the senior pastor took a call at another church, and in the absence of our much-beloved leader various conflicts began to emerge. One of these conflicts (predictably) had to do with the music. There were some among the church elders and influencers who thought that we should sharpen our approach to contemporary worship by refraining from singing any traditional hymns in the second service. In the opinion of this group, our second service had become too dreary; only newer, more upbeat music should be included going forward. This seemed too simplistic to me, and I thought moreover that we should wait to develop a more comprehensive approach with our next senior pastor. I remember having a meeting with some of our elders about this issue, at which one of the elders mused aloud about the familiarity of this conflict. “Why is it,” he said, “that churches always seem to fight about the music?”

To me, the cause of the conflict was relatively straightforward. Our senior pastor had left a month or two earlier, and we were all experiencing varying levels of grief from his departure. For some, that grief was finding expression in the various controversies that were arising around the church about different issues, including the issue of worship music. In my opinion, it was a pretty simple case of scapegoating: grief working itself out as irritation at various shortcomings that were perceived among the remaining pastors, staff, and programs.

There was one detail about this particular conflict, however, that puzzled me. In the perception of the group complaining about the worship music, there had been a distinct shift toward a more traditional style of music in the second service following the senior pastor’s departure. But to the best of my knowledge, I had not changed anything in my approach to selecting and leading worship music. How was it, then, that some had perceived a shift where others, including myself, had perceived none? I certainly was not conscious of making any changes in my approach to the music, since I thought it was vital to maintain as much stability as possible in the interim term between senior pastors.

That’s when another hypothesis began to emerge. Might it be, I wondered, that there had in fact been a major change to our worship music after all, except that it was not the music of our congregational song that had changed? Might it be that the music that had changed was the music of the former pastor’s homiletical voice and liturgical presence, which was now replaced by the very different music of our interim pastor’s preaching and presence? Might it be that this was the musical change these individuals were sensing, without identifying it as such?

Whatever the answer might have been in that particular instance, I am convinced that, in the practice of preaching more generally, musicality is indeed a powerful yet underappreciated aspect of the overall aesthetic, rhetorical, and theological import of sermons. Moreover, as a musician myself, I have long been cognizant of the specifically musical instincts that I bring to the craft of preaching, without being able to account for how exactly these instincts might take shape. This book is one attempt to provide such an account. More specifically, what is undertaken here is a sustained analysis of the musicality of preaching by bringing the art of music into deep theoretical and practical conversation with the art of preaching.

There is a connection in Scripture between hearing and faith, whereas there is also a connection between sight and certainty (or, at least, the idolatrous desire for certainty). This is not to minimize the irreducibly embodied and contextual nature of preaching or to dismiss the important distinction between speech and music. It is simply to suggest that there are important insights to be gained from an examination of sound—and more specifically, musical sounds—if for no other reason than that preaching and music occupy such a prominent place in the worship life of Christian churches throughout history and around the globe. There is much to learn about the created world, the nature of listening and hearing, and the call to sound forth the gospel through a conversation between the art of music and the art of preaching. All who have ears to hear, let them listen.