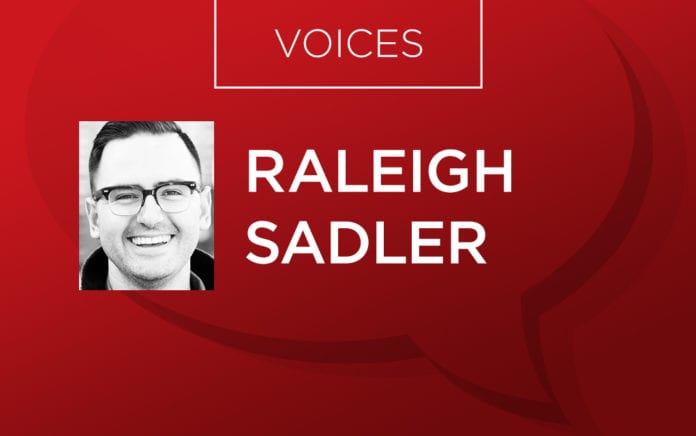 WHO: Raleigh Sadler, founder of Let My People Go.

HE SAYS: “You don’t have to be a superhero to make an impact. You can be you. Like those for whom we wish to care, each of us has a God-given dignity and a voice worth hearing.”

“You are part of God’s plan to bring freedom to those trapped in slavery. No matter where you find yourself, God is calling you to do something about it, and he has been preparing you for this your entire life.”

“The oppressed and trafficked are in need of awakened consciences and concentrated work for justice for them. They need that from real people—people who sometimes don’t know exactly what to do, people who will sometimes fail, from vulnerable people.”
— Russell Moore, president, Ethics and Religious Liberty Commission
(from the foreword)

A CONVERSATION WITH RALEIGH SADLER

How have some of our attempts to stop human trafficking ignored the imperative of being vulnerable? How can these attempts do more harm than good?

We seem to prefer “quick fixes” to long-term developmental approaches. The problem with a rescue model is that it is often more transactional than it is relational. It assumes often that the main problem facing someone is their immediate situation. However, a model acknowledging vulnerability sees the needs impacting each person as more holistic.

The danger with a paternalistic rescue motif is that it centers the role of the hero on the “rescuer” and not the survivor. As we do this, we find ourselves in a position of power over the vulnerable person in our care. Without knowing it, we can exploit this person.

What are some myths about human trafficking and how to fight it?

The Highway Myth: It only happens near highways. The Movement Myth: This assumes that the term “trafficking” actually implies movement. The Super Bowl Myth: That it only happens around large sporting events. There are more myths detailed in the book.

Why do you think the church needs the message of this book right now?

This is a season in the life of the church, and the world at large, where vulnerability is heightened. People are aware of vulnerability like never before. We have unprecedented access to the brokenness impacting image bearers around the world. I’d venture to guess that we all feel more overwhelmed than ever. This book expresses that our answer lies right behind our feeling of inadequacy.