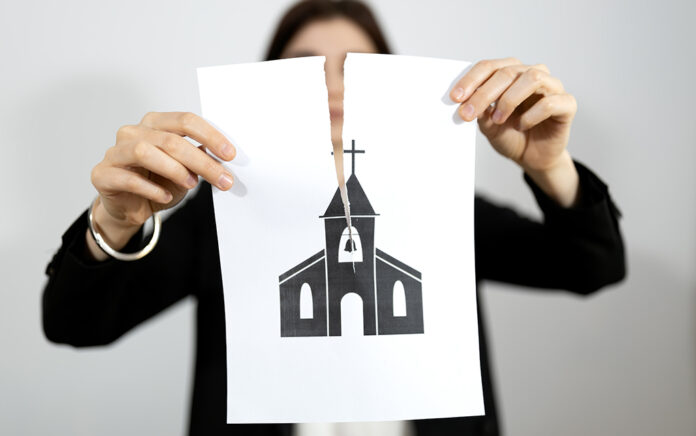 The verdict is in: God, yes. Religion, no.

I have long contended that the most significant religious trend of our lifetime is the rise of the nones. As I wrote in my book The Rise of the Nones, the “nones” are the religiously unaffiliated. When asked about their religion or faith affiliation on various surveys and polls, they do not answer “Baptist” nor “Catholic” nor any other defined faith. They simply say, “I’m nothing” or check “none.”

In 2021, the percentage of Americans who self-designated as atheist, agnostic or of no particular faith rose to 29% of all U.S. adults. That is nearly 1 out of every 3 adults, up 10 percentage points from when surveyed in 2011. The same survey found that the number of professing Christians dropped from 75% in 2011 to 63% in 2021.

Digging further, Pew found that over the same 10-year period, those who prayed daily dropped 13 percentage points, and the number who said religion was important to their life dropped 15. The conclusion of the Pew researchers was fitting: “The secularizing shifts evident in American society so far in the 21st century show no signs of slowing…. The religiously unaffiliated share of the public is six percentage points higher than it was five years ago and 10 points higher than a decade ago.”

From just around 5% in the 1940s to now 29%, it is clear we are experiencing a vast cultural realignment. Even more stunning is when you set apart those who are between the ages of 18-29, the youngest of the surveyed edge, the self-designation marks 39%.

These changes are reflected in church membership. According to a recent Gallup survey, Americans’ membership in houses of worship has continued to decline to such a degree that it has now dropped below 50% for the first time in Gallup’s eight-decade trend. In 2020, only 47% of Americans said they belonged to a church, synagogue or mosque, down from 50% in 2018 and 70% in 1999. As anyone in the social sciences will tell you, that precipitous of a drop in such a short period of time is simply jaw-dropping.

As might be expected, when analyzed according to generations, the younger you skew the more likely you are to be unchurched. Among those Gallup calls “Traditionalists,” meaning those born before 1946, 66% belong to a church. It drops to 58% among Baby Boomers, and plummets to only 36% among Millennials. Early data on Generation Z suggests the percentage of involvement is at least as low (if not lower) as Millennials, which means the future of the American church is one generation away from being devastated. So while Christianity remains the world’s largest faith and is even on the rise in the global South, it is no longer the dominant cultural force in the West.

It is to be noted that the rise of the nones and the decline in church attendance and membership is not the same as a decline in the belief of a god. Indeed, in places like the United States, the overwhelming majority are theists. So you can think of it this way: We have a world full of people open to and even believing in God, but rejecting religious pathways to that God, religious dogma about that God, and religious groups adhering to that God.

The verdict is in: God, yes. Religion, no.