Home Resources How Effective Is Your Donor Communication? 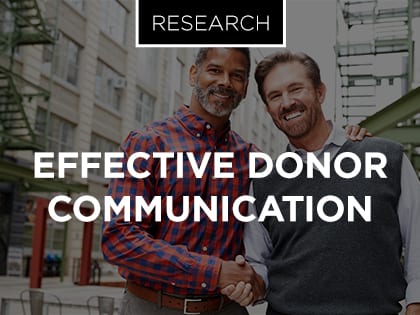 Valuable insights from The Donor Mindset Study, a series of research reports about American charitable donors

The average American charitable donor reports receiving about eight mailings and 10 emails from nonprofit organizations in a typical week. A majority of these communications come from organizations they don’t financially support.

Consumer insights company Grey Matter Research and research panel Opinions4Good (Op4G) partnered on The Donor Mindset Study, a series of research reports about American charitable donors. The latest in the series, The Donor Mindset Study VII: Cutting through the Noise, explores how much mail and email donors report receiving from charities, as well as what proportion they actually read (all or in part).

The weekly averages, as reported by donors, look like this:

That’s a total of 17.7 messages from charities each week; 920 per year, or 2.5 every day just between mail and email (not including social media, text, advertising or other forms of communication).

On average, donors estimate that 54 percent of the mail and 58 percent of the e-mails they receive from charities come from organizations they don’t support (commonly referred to as “prospecting”).

Who gets the most communication from charities?

Few donors discard everything they get without reading it—only 7 percent do this with all the mail they receive from the organizations they support, and 25 percent do this with all the prospecting mail they get. The numbers for email are strikingly similar (of course, they don’t take into consideration the emails donors never see because they’re caught in spam filters or sent to e-mail addresses donors rarely or never check).

5 Things to Remember About Worship