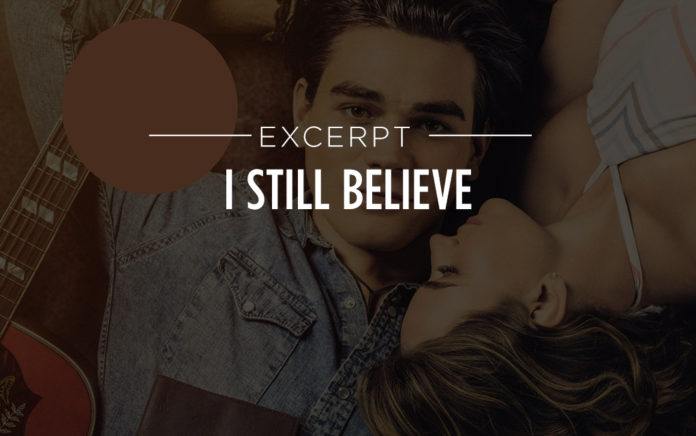 What it was like to see my story acted out.

Excerpted From
I Still Believe
By Jeremy Camp

I enjoyed being on set to watch the story of I Still Believe come together through the amazing actors and actresses. I tried to stay out of the way and let the professionals do their jobs, but the cast and crew were gracious to Adrienne and me while we were there. Andy Erwin would ask me questions from time to time, and K.J. asked me about specific ways I responded to or handled different parts of the story. They were completely committed to portraying every little detail correctly. That meant a great deal to both of us, to see our story handled with that level of respect and care.

I missed about half of filming because of my schedule, including completion of an album. I had to leave for a two-week stretch to attend a conference in Hawaii. Imagine being bummed about going to Hawaii!

The first day I returned to the set from Hawaii happened to be the day they filmed the hospital scene when Melissa thought she was healed and was trying to get out of bed. When Britt sat up in her hospital bed and exclaimed, “It’s gone! It’s gone!” I couldn’t handle it. I turned and ran to find a place where I could break down and cry. Adrienne followed me off the set and held me until I could gather my emotions.

The hospital scene was too real for me, like watching it actually happen. I have talked about what took place in the hospital many times, but other than in my mind’s memories, that was the first time since it happened that I saw Melissa try to get out of bed.

Melissa’s death also was on the shooting schedule, and I did not return to the set that day. They record several takes of each scene when making a movie, and I could not subject myself to watching those scenes over and over.

Overall, witnessing my life unfold before me on a movie set was a surreal experience. Adrienne and I would watch and mention to each other that we could not have imagined this movie would actually take place. Being on set especially caused me to realize that Melissa’s heart to reach one person had become this massive ministry that had already reached millions of people and, through the movie, would reach millions more.

I try to live in a manner that is openhanded to whatever God wants to do in my life, and to feel that God was entrusting me with this next season of a movie to share his story again was extremely humbling. Thankfulness was a big part of my emotions—thankfulness for what God had done to bring me to that point, and thankfulness that he had prepared me for all that would result from the movie.

The success of Bart Millard’s movie created the path for I Still Believe to be filmed. Bart is a trusted friend, and he generously gave me some of his time so that we could sit down together and talk about not only the movie process but also what I could anticipate after the movie released. If you haven’t seen the film I Can Only Imagine, I highly recommend you do. Part of Bart’s story includes living with an abusive father. Bart openly described for me how the movie process triggered some of the father issues he still carried, and how watching the filming brought up emotions he discovered he still needed to figure out.

He told me, “Man, get ready for people to share their story after story with you. And be prepared to wear that heavy weight on your shoulders.”

I’ve encountered that to a degree through my book and sharing my testimony in concerts. Bart told me I need to prepare for that experience on a greater scale because of the number of people the movie will reach.

He also told me that I would receive even more invitations to speak about my experiences with grief than I already do. He told me that I would not feel like I was expert enough to speak on grief and would have uncertainties about whether I should even place myself in those positions. But then he gave me great advice: “Just do the things that you feel like God wants you to do. Don’t just do things because the door is open. Make sure it’s something that he wants you to do.”

I needed to hear those words in particular. God has shown me numerous times that not all good things are God things, that because a door is open and it seems like a good thing doesn’t necessarily mean he wants me to do that.

From talking with Bart, I believe that, moving forward, a good litmus test for me will be whether I feel a peace about the opportunities that come my way. I appreciate Bart’s wisdom and his willingness to share it with me.

From Outreach Magazine  5 Encouragements for Pastors Who Feel Inadequate

Adrienne … wow! I owe her so much. At any point if she had said, “I don’t think I can handle this movie,” that would have been all I needed to hear. Since we met eighteen years ago, she has embraced my testimony. She has encouraged me to talk about Melissa. At times she was the one championing me to talk about Melissa because she so believes in the power of my testimony and God’s faithfulness through it all.

She has always been supportive, and that did not change during the movie process. Watching her on the set encouraging everybody remains a highlight for me. The cast and crew were telling me, “Your wife is amazing.” I’d say, “I know!”

Adrienne and I have been married for 16 years. We have three growing children. Yet we realize there will be a point during the movie when viewers are going to fall in love with Jeremy and Melissa. They are going to be disappointed that Melissa and I couldn’t live our lives together.

Adrienne has told me, “I know that I know that I know that God is going to use this movie, and that’s all that really matters. It’s not about me. But I’m not naive. I know the possibility of how people will react to your love story with Melissa. I’ve had moments when I’ve thought about that. It’s not an easy feeling, but I’m asking the Lord to prepare my heart and to help me handle it all with his grace. And I know that we’re supposed to do this, and I want people to hear what God has done in your life.”

Amazing. And I would love for Adrienne to be honored through this movie.

But most of all, I want to honor God because his perfect love has taught me how to love and how to be loved.