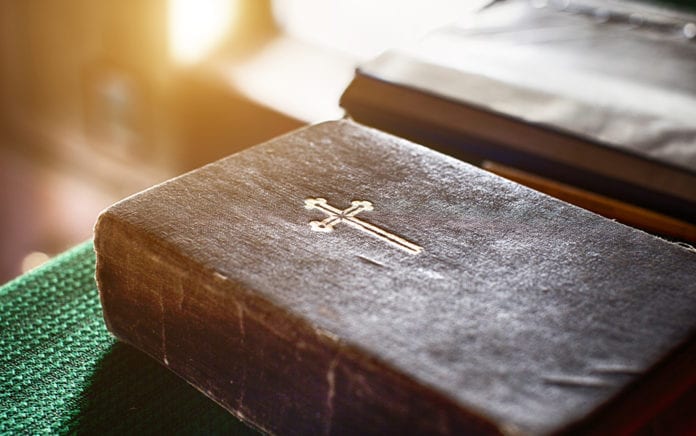 Bibles for the World’s ‘Learn the Bible in a Year’ book and daily radio broadcast aims to combat the rise in biblical illiteracy.

COLORADO SPRINGS, Colo. — Bibles For The World (BFTW), a global ministry focused on reaching unreached peoples with the gospel in developing countries, is tackling a disturbing and growing trend: Bible illiteracy in the United States. Launched earlier this year, BFTW’s Learn the Bible in a Year program, a two-minute daily radio feature that leads listeners from Genesis to Revelation in 365 programs, continues to gain momentum in the U.S.

The need for such a Bible literacy initiative is underscored by two Barna Group studies. In March, Barna released a report, “Translating the Great Commission,” which revealed a surprising proportion of churchgoing Christians lack familiarity with Jesus’ famous command recorded in Matthew 28:18–20, often referred to as the “Great Commission.” Before his ascension Jesus told his followers to “go into all the world and make disciples of all nations.” More than half of U.S. churchgoers (51 percent) could not identify the correct Bible passage as the Great Commission among a list of several references.

The Barna report spotlighted an ongoing “disturbing” slide in biblical literacy likely caused by several factors, according to BFTW President John Pudaite. Among them: removing the Bible from public schools, increasing secularization, diminishing reading habits and even de-emphasizing Bible teaching in some churches.

The outlook is even bleaker as indicated by a 2016 Barna survey demonstrating a weakening in the national average of Bible reading since 2009. As more and more millennials join the ranks of adulthood, only about one-third of all American adults report reading the Bible once a week or more.

The conditions were ripe to introduce Bibles For The World’s Learn the Bible in a Year program. “This is not just another Bible reading plan, rather it’s a Bible learning plan,” said Pudaite. “We’ve found that many sincere believers attempt to read through the Bible because they ‘know they need to,’ and with the desire to ‘just get it done.’ Many fail to learn and be shaped by the rich content of the entire book, how Scripture is the unfolding story of God’s plan for mankind.”

From Outreach Magazine  Here in Spirit

A former pastor and Bible teacher, Houle serves as BFTW’s director of Scripture engagement. Currently, available only in English, Learn the Bible in a Year is being translated into several languages for audiences in India and, possibly, Nepal.

“We believe that when people understand and appreciate the Bible’s transformational power in their own lives, they will also have a greater desire to be part of helping make it available to those in other countries and cultures who have little or no access to God’s Word,” said Pudaite. “Bible literacy, here in our own culture, has a direct correlation to our worldwide mission to be a catalyst for transforming others through the power of God’s Word.”

Response to the program and the book from radio stations and customers has been quite positive. “Love the production and content,” said Chris Chicago, of NGEN. Rob Jones, from PraiseFM said: “Well produced and encourages listeners to understand and read the Bible. Sign us up!” One satisfied customer wrote: “Lots of books and Bible reading plans are available to help you read through the Bible in a year. But this is the first one I’ve seen that focuses on understanding what you read. I really like the way this is put together … nice narration and solid production.”

From Outreach Magazine  Evangelism and the Bible

As Bibles For The World, which is headquartered in Colorado Springs, marks its 60th year, the ministry hopes that enabling Western Christians to better understand Scripture will heighten their interest in helping provide it where it is not readily available.

Pudaite, who became president of the ministry in 2015, knows firsthand the transforming power of the Bible. BFTW was founded by his father, Dr. Rochunga Pudaite, who came from a headhunting people group in northeast India evangelized by a missionary who introduced them to the Gospel of John in 1910. In just two generations, 90 percent of the entire tribe was converted to the Christian faith, abandoning their heritage of savagery.

“We turned from being headhunters to heart-hunters for Jesus Christ,” noted Pudaite. “If that can happen in such a short time with such a dramatic change in an entire people group, imagine what can happen as we reach others with the transformational power of God’s Word!”

Actor/singer Pat Boone praised Bibles For The World on the ministry’s website, saying “[Rochunga] you are a spiritual hero to me because you’re devoted to what Jesus said—and what the New Testament teaches—that faith comes by hearing and hearing by the Word of God. I believe that getting the Bible into more people’s hands around the world is one of the most important things we can ever do in this life. That’s why we’ve been involved with Bibles For the World for well over 40 years.”

In addition to radio, you can follow the Learn the Bible in a Year series at the BFTW website, where subscribers can listen to episodes and download accompanying study materials designed to be completed in just seven minutes a day. It is also available as an iTunes podcast.

The Need for Love in Our Political Action