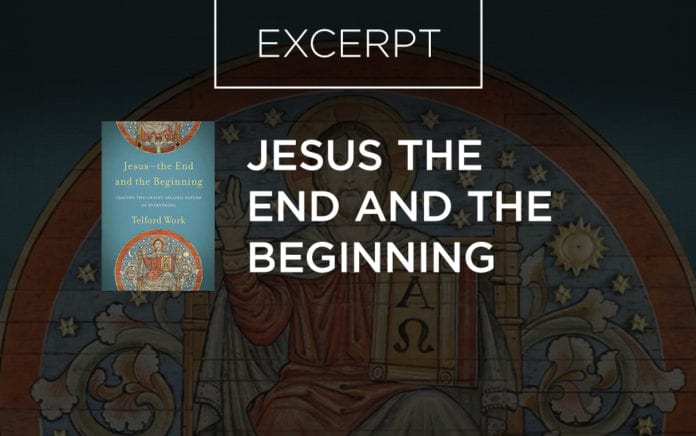 Jesus brings the former things to an end and makes all things new.

Excerpted From
Jesus—the End and the Beginning
By Telford Work

You will find the phrase Tolkien appropriated “all things,” occurring again and again throughout the Scriptures. “Behold,” Jesus says, “I am making all things new.” That proclamation of his alpha is in Revelation 21, at the canon’s very end. His church has beheld and has faithfully reported what it has seen in joy and hope. All things are reconciled to him. That means nothing is detached from Christ’s reign. He is not the Savior of part of creation, even the “spiritual” or “religious” part. He is the whole creation’s Savior. Israel’s. America’s. France’s. Russia’s. Even heaven’s (Rev. 12:7–11). There is no other name, no other domain and no other comprehensive omega and alpha.

I still find it striking that the New Testament witnesses say this about a human being—and one from an obscure family in ancient, small-town Galilee at that. Jesus is just, as one writer puts it, a marginal Jew in a marginal town of a marginal area of a Roman Empire that was on its way out anyway. It’s astonishing that Christ’s life receives such a sweeping interpretation. Either these writers are right, or they are the greatest exaggerators of all time.

Allow me to draw your attention to some of the places where this core conviction surfaces in Scripture. Let this tour help you recognize it in the worship of our churches, the fabric of our lives and the substance of our mission. Hear the astonishing claims that are being made again and again. If you’ve heard them already, then hear them afresh, because many of us have heard them so many times that we have forgotten how shocking and renewing they are meant to be.

Chapter 2 explores the extraordinary development at theology’s heart: Jesus ends and begins God. Sure, this is true of our opinions of God: our old ones put Jesus on the cross, so they suffer the Father’s verdict that we misjudged his Son. The resurrection kindles new and truer opinions of God.

But Jesus ends and begins God in more radical ways. A “god” is what we call one end of a certain kind of relationship. Since Jesus’s coming terminates our old relationship with YHWH and pioneers a new one, Jesus changes who God is to us. In taking on our relationships as his own—“my God, my God,” he says on the cross (Matt. 27:46, quoting Ps. 22:1)—his coming does more than just express and reflect his own eternal triune relations. It takes our relationships and makes them his own. The three persons of the Trinity are one another’s eternal beginning and end, and Jesus’s ministry expresses this, as well as fulfilling and transforming—ending and beginning—it by including us. Through him the Father becomes the Father of many and the Spirit the resident of a whole multitudinous temple. So the Son is the omega and alpha of all three persons: the end of their relational exclusivity (Matt. 11:27) and the beginning of them as Father, Bridegroom and Spirit of the church. Jesus is how the God of old has chosen to be God anew. This is heady stuff, and liable to being misunderstood and poorly articulated, so we’ll need to be careful.

Chapter 3 describes a change in the cosmos—our world—the created order that we’re a part of, which we interpret and indwell according to our many different understandings of it. Jesus has been concluding the old one—the whole order, and our cloudy “worldviews” of it—and has inaugurated the new one. At the eye of this revolutionary storm is his engagement with the mysterious “ruler of this world” who acts decisively in the events leading to Calvary, and who is overthrown with his realm as the Son is lifted up.

Chapter 4 narrows our focus to humanity. Jesus’ coming brought the end of what it meant to be human “under the sun” (a futility that Ecclesiastes describes, which rose out of humanity’s original traits, divine calling and then sinful depravity) and the beginning of what humanity will mean forever: a life characterized by the Holy Spirit’s eternal presence, gifts and virtues. His mother, Mary, exemplifies both old humanity at its best and new humanity at nearly its earliest, so her life will help us sketch these two pictures with more detail and specificity.

God’s chosen people were a fresh start for old humanity, so chapter 5 highlights Mary’s nation, Israel. Jesus travels, then blazes, its tortuous path to glory. God promised Jacob’s descendants the gifts of belonging to God and vice versa, enjoying earthly power and prominence, and displaying God’s wisdom. Israel did truly receive a measure of these gifts but not the wholesale rescue humanity needed. Jesus was, is and will be its necessary renewal. Each gift comes into its own in the Messiah’s ministry, bringing about a surprising new way to be God’s people. We will focus on the apostle Paul as an exemplar of Israel on both sides of Christ’s transformation.

Israel’s fellow nations are the topic of chapter 6. “All flesh is grass” (Isa. 40:6), and human flesh comes in communities and ethnicities that rise and fade like grass patches. They don’t perish and rise like individual human beings, and they aren’t unique as Israel is, so the pattern here is different. However, Jesus is still the omega of their old rivalries and oppositions to his reign. They simply will not domesticate or defeat him. And Jesus is the alpha of new ways of life and nationhood—international ones—that spring up within them. Timothy’s mixed ancestry (Acts 16:1) anticipates the gospel’s revolutionary impact on nationhood and on contemporary identity politics.

From Outreach Magazine  When Your Sin Confronts You

Last but certainly not least, chapter 7 takes up the most obvious way that Jesus is an omega and an alpha. Our world of humanity, Israel, nations and families is composed of persons—beautiful, beloved, wretched, sin-ridden persons. Their only true end and new beginning is Jesus Christ. By every biblical measure, he himself personifies the good life that God intends for human creatures. He took on the so-called life that we have fashioned that gift into, ended it in the only way that wouldn’t take us down with it, and began a new resurrection life that he’s made available to us. What this looks like in practice is every saint’s baptismal life. For brevity’s sake we will focus on Simon Peter, a figure who dramatically portrays both that doomed old life and that astonishing new one, sometimes in the very same scene. Yet we will cast sideward glances at the many lives that don’t look so exemplary.

I want a question to haunt you throughout these chapters: What is the turning point of your life? What is the hinge and identifier of your story, your people, your world, your solemn commitments? Is your omega and alpha Jesus Christ?

Excerpted from Jesus—the End and the Beginning by Telford Work, ©2019. Used by permission of Baker Publishing. BakerPublishingGroup.com.