Home Resources Books How Will We See God Face-to-Face? 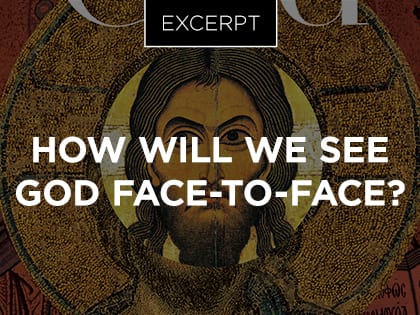 Calvin’s understanding of the beatific vision uncovers fascinating insights into his christology and more.

This is all the more important since Calvin’s exegetical comments about the beatific vision display remarkable theological acumen. Though he does not usually mention the work of previous theologians on the beatific vision, he clearly works within the parameters of the broader theological tradition, which is particularly evident with regard to his views on the object of the beatific vision. His opinion that we will see the majesty (or essence) of God is in line with the broad consensus of Western medieval Christianity. At the same time, Calvin’s cautious vocabulary (especially with regard to the term essential) means that he did not simply parrot past articulations of the doctrine. Furthermore, the way he navigates questions surrounding the presence of God in and through “signs” and “veils” indicates his keen awareness that the telos of the future vision is in some manner already present in salvation history. Put differently, Calvin’s doctrine of the beatific vision was in line with the earlier sacramental understanding of it. For Calvin, God manifests himself throughout history, and we anticipate the beatific vision whenever and wherever we discern his presence today.

Calvin’s use of the terms “face-to-face” (facie ad faciem) and “openly” (palam) is particularly fascinating. For Calvin, face-to-face vision of God was not simply a synonym for beatific vision. Instead, he understood face-to-face vision of God as an expression of familiar intimacy between God and human beings, something that allows for degrees of intensity. Thus, Calvin’s use of the language of facie ad faciem and of palam highlights salvation history and divine pedagogy. Apart from Irenaeus in the second century, no theologian has tied the vision of God so closely to a divine pedagogical program as Calvin. In some ways, this caused him to depart from the earlier tradition. Divine pedagogy not only meant a stronger emphasis on salvation history than was common in the patristic era and the medieval tradition, but it also led to a different exegesis of certain biblical narratives. Since he rigorously stuck to his conviction that, as part of his teaching program, God gradually lifted the veil over time, Calvin could no longer accept the notion—nearly unanimously agreed upon in the earlier Western tradition—that Moses saw the essence of God. Calvin was convinced that Moses’s “face-to-face” vision wasn’t anything like the “face-to-face” vision under the new covenant as Saint Paul describes it in 2 Corinthians 3 and 4, and Calvin treated the latter, in turn, as far inferior to the “face-to-face” vision of God in the eschaton.

Calvin’s independent mind also shows in his willingness to move away from settled opinion so as to retrieve earlier viewpoints that he considered more acceptable. One such instance is his treatment of the intermediate state. Although he did not discuss the topic in detail in his later theological writings, he appears to have remained true to his early conviction, expressed in the Psychopannychia, that the vision of God in the intermediate state is inferior to that of the saints after the resurrection. The teaching of Thomas Aquinas and of Pope Benedict XII’s 1336 Benedictus Deus had cemented the theological position that immediately after death, the souls of the saints have an immediate, intuitive view of the divine essence. Calvin, however, charted a different path, appealing to earlier theologians, including Bernard of Clairvaux. By claiming that even after death the vision of God is subject to gradation, Calvin returned at least partially to earlier patristic (and Eastern) views, which had emphasized that after death the soul continues to desire a clearer vision of God.

Similarly, Calvin’s insistence that the Old Testament theophanies were manifestations of the eternal Son of God, and as such prefigured the incarnation, represented a notable retrieval of a much earlier tradition. Ever since Augustine’s De Trinitate, this viewpoint had been rejected for fear of subordinationism. Though Calvin was by no means subordinationist in his Christology, he was convinced that when God stoops down into history, he always does so in Christ. This return to a pre-Nicene reading of the theophanies seems to me an important moment in the history of exegesis. Calvin’s view that all revelation of God in history is christological not only injected an important anti-Marcionite element in his reading of Scripture, but it also served to underscore the sacramental presence of Christ in the Old Testament. Calvin, we could say, acknowledged the sacramental presence of Christ as hidden within the Old Testament Scriptures—an important antidote to any separation between nature and the supernatural, since it tells us that historical realities can only properly be understood in the light of Christ.

To be sure, Calvin did not extend his christological treatment as far as he might have. In particular, he adopted the medieval consensus that the eschatological promise of seeing God face-to-face, as he is (cf. 1 Cor. 13:12; 1 John 3:2), entails a vision of the divine majesty in se. For Calvin, this implied that all mediation will come to an end and that in the eschaton we will no longer see God in Christ. Fortunately, as we will see in subsequent chapters, Puritan theologians such as Isaac Ambrose, Thomas Watson and John Owen did not follow Calvin in this, and also Jonathan Edwards had a more consistently christological approach to the beatific vision. It is hard to escape the conclusion that for Calvin, the humanity of Christ fails to have a meaningful role in the eschaton. By separating the vision of the divine essence from the vision of Christ’s humanity, Calvin ended up with a challenging dilemma, namely, how to maintain the creator-creature distinction in the light of our ability to see the divine essence itself. It seems to me that a rejection of (christological) accommodation in the eschaton makes it difficult to articulate this distinction convincingly. Even on this score, however, we should recall that Calvin maintained remarkable sobrietas, not in the least in terms of the vocabulary that he employed to describe our final telos. Though he was convinced that we will see the essence of God and that we will be deified in the process, Calvin’s language always demonstrated deep respect for the transcendence of God.

From Outreach Magazine  How to Assemble a Small Group Leadership Team