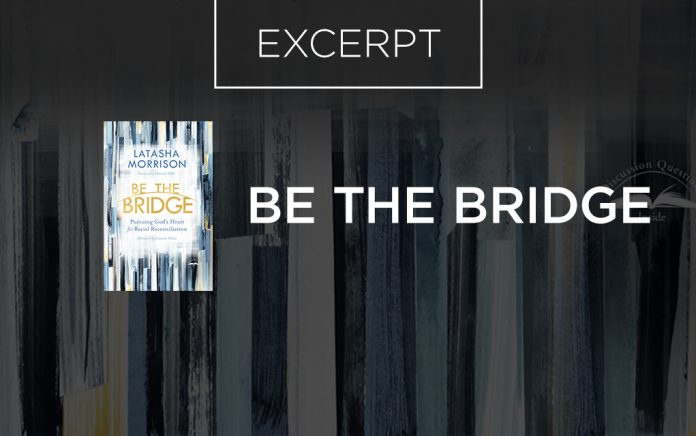 We get free from the power of bitterness and anger only through forgiveness.

Excerpted From
Be the Bridge
By Latasha Morrison

When we’ve been hurt, when we’ve been battered, sometimes anger and bitterness give us a sense of control. But the truth is, our bitterness and anger often control us. They keep our perpetrators close at hand, keep the wrongs they’ve done to us in the front of our minds. In choosing bitterness and anger, we hand power back over to those who’ve harmed us. That’s true whether we’re discussing family pains, church pains or the pains wrought by racism, classism or sexism. How do we get free of that power?

Through the practice of forgiveness.

The first step in forgiveness is understanding just how much we need forgiveness extended to us, “for all have sinned and fall short of the glory of God.” There’s good news, though. When Christ was nailed to the cross, he didn’t experience just the pain of being betrayed by Judas or the pain of the nails driven into his hands by the Roman soldiers; he experienced the pain of all humanity’s sin. Your sin. My sin. As Peter wrote, “‘He himself bore our sins’ in his body on the cross, so that we might die to sins and live for righteousness; ‘by his wounds you have been healed.’” And as he bore the weight of our sins, he cried out to God, “Father, forgive them, for they do not know what they are doing.” See? Christ extended forgiveness to us.

Understanding that we’ve been forgiven so much, shouldn’t we extend forgiveness to others? C.S. Lewis wrote, “To be a Christian means to forgive the inexcusable, because God has forgiven the inexcusable in you.” In other words, we forgive because we ourselves have been forgiven. Forgiving others is the most Christlike act we can carry out. It is costly and painful, transformative and life-giving.

Practicing forgiveness doesn’t mean simply ignoring or glossing over the evil and injustice we’ve experienced. It also doesn’t mean that we deny or spiritualize away feelings of anger or grief, the normal emotions of a wounded heart. In fact, Paul’s teaching to the Ephesians seems to show the opposite. He wrote, “Get rid of all bitterness, rage, anger, harsh words, and slander, as well as all types of evil behavior. Instead, be kind to each other, tenderhearted, forgiving one another, just as God through Christ has forgiven you.” Take a close look at the passage and consider these questions:

See? Only when we’ve made space for our emotions, when we’ve honestly evaluated them, can we move into true Christlike forgiveness.

Bridge builders don’t deny hurt. They experience it. Sit in it. Feel it. But they don’t stay in that pain. They don’t allow those who’ve wounded them to control them or constantly drive them back to anger and resentment. Instead, they allow that pain to continually push them into forgiveness.

Of course, learning to forgive in this way does not happen overnight. In fact, to forgive as Christ forgave, we’ll need to receive the help and grace of God. But if we can learn this kind of forgiveness, our lives will reflect the truth spoken by Dr. Martin Luther King Jr.: “Forgiveness is not an occasional act; it is a permanent attitude.” It’s this sort of permanent attitude that brings freedom.

Excerpted from Be the Bridge: Pursuing God’s Heart for Racial Reconciliation. Copyright © 2019 by Latasha Morrison. Used by permission of WaterBrook, an imprint of Penguin Random House LLC.