Home Resources Books What Happens When We Practice What We Preach? 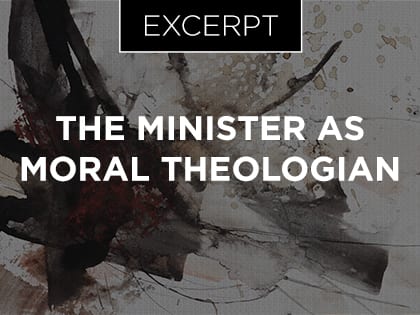 Simply living out your faith day by day speaks the gospel more powerfully than any sermon.

Serving as a Moral Example

Of the many challenges of life in ministry, none is more pervasive, or potentially more wearing, than the sense that you are under constant scrutiny. To begin with, your professional performance is being evaluated with every sermon, class and public event, not merely by your supervisors in ministry but by every church member or casual visitor. It can seem as if you have two hundred bosses who want different (and incompatible) things from you. Worse yet, not only is how you do your job subject to review but so also is the way you dress, the car you drive, your spouse (if you are married) and the conduct of your children (if you have any). If you live in a parsonage, particularly one adjacent to the church you serve, even the quality of your housekeeping and lawn maintenance may be matters of general observation and comment. Many pastors report feeling that their entire lives must be lived in a fishbowl, and protecting a reasonable degree of privacy for themselves and their families can be an ongoing struggle.

It is a delicate thing to balance pastoral availability with time for respite: to maintain presence and visibility in the community and at the same time to preserve needed private space. This difficulty is not just a matter of personal inconvenience for ministers. The failure to establish time off-duty and out of the spotlight contributes to patterns that are unhealthy both for clergy and for the congregations they serve, leading to burnout or worse. One particular dimension of the “fishbowl” aspect of ministry, the one that is most serious and difficult of all and yet that cannot be avoided, is the role of the minister as a model, a kind of public example of what a follower of Christ is supposed to be and do.

It is a role made more challenging by the tendency of other people, often including those outside the church, to regard ministers as morally set apart and to expect them to be exemplary in their conduct at all times and in all respects. This attitude remains common even among those whose denominational traditions reject the idea of a different moral standard for the ordained and insist on the priesthood of all believers as a matter of doctrine. We may say (and believe) that “all have sinned and fall short of the glory of God” (Rom. 3:23) and affirm that ministers are human beings who stand in need of forgiveness and grace like everyone else. Still, we look to those who lead our communities to live out the gospel they proclaim, and a glaring failure to do so can cast doubt not only on their personal integrity but also on the faith they represent.

What’s more, it is not only outright wrongdoing that is in question. Of course, obvious moral failure can discredit Christian ministry in the eyes of outsiders. But even socially acceptable behavior may distort others’ understanding of what discipleship looks like if it displays none of the distinctiveness that Scripture or tradition calls for in the lives of believers. Onlookers often take a Christian leader’s way of life as a standard for what is expected of those who follow Jesus, a benchmark of faithfulness. Thus pastoral example can mislead not only by scandal but also by mere mediocrity and thorough accommodation to the surrounding culture. Ironically, the significance as well as the difficulty of this modeling dimension of the role only increases with the quality and effectiveness of the minister’s work in other aspects of ministry. Those who preach with passion and persuasiveness about the transforming power of the Holy Spirit, who teach convincingly about the life of the community of faith as a sign and foretaste of God’s reign inaugurated in Christ—they especially will have to give evidence of these realities in their own lives. If they do not, they risk undermining their own credibility and that of the good news they announce. Ministers who take seriously this unavoidable responsibility to practice what they preach can hardly help being a little daunted by it.

But with all of its challenges, the role of the minister as moral exemplar also offers unparalleled opportunities for leadership and witness in a community. Anyone can tire of listening to preaching and teaching about the life of faith (as suggested by the way we use the adjectives “preachy” or “pedantic” to complain about those who seem always to be telling us what to do). This is especially true about the moral aspects of Christian life, in which demands for devotion, forbearance and sacrifice sometimes seem so impossibly hard to meet that we don’t even want to hear about them! But the actual performance of goodness, the visible works of those who “do justice, and … love kindness, and … walk humbly with … God” (Mic. 6:8), can hardly fail to be winning, and they offer a lesson more powerful than any words. The pastor who can find patience for the difficult congregant and time to help the stranger in need; the chaplain who has the wisdom and humility to sit silently with a family devastated by grief; the leader of a Christian organization who consistently works to bring out the best in others and generously gives them credit for what is accomplished—all of these not only proclaim the goodness of God, but by their conduct help to make it manifest in the world. Because of them, the gospel is easier to believe and easier to hang on to in times of struggle. Their lives are the best evidence of the truth and power of what they say, and thus their lives offer the surest guidance to those they serve.

Excerpted from The Minister as Moral Theologian by Sondra Wheeler. Used by permission of Baker Academic, a division of Baker Publishing Group, ©2017. www.bakerpublishinggroup.com