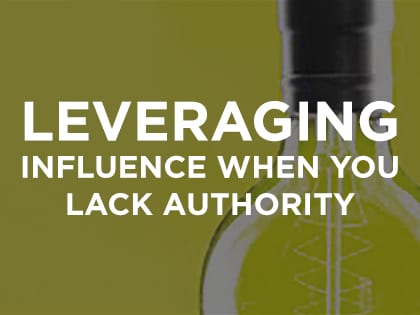 Leading others starts with having the self-discipline to lead yourself.

A few years ago, our humorous son, Jake, came home from preschool and dropped a truth-bomb in our kitchen—one that is still reverberating in my ears today. It was around 5:00 p.m., and I had just walked in the house from work.

I asked him, “Hey buddy, how was school?”

He answered, “Good.” After all, he’s a male. What else is he supposed to say?

He then went on to offer a little more detail. “Hey Daddy, you know what?”

Instinctively, I cut my eyes at my wife. My look basically said, “Who is teaching him this garbage?”

Jenny went on to explain that Jake’s preschool teacher makes a huge deal out of that statement. Jake’s teacher cannot make Jake pick up his toys after he’s finished playing with them. She cannot force Jake to eat his food. She cannot keep Jake from hitting Will for calling him a “chicken nugget.” And I had to admit that she’s right. Jake is in charge of Jake.

I have recalled that conversation so many times because the implication of that truth is so powerful for every one of us. It’s not just true for three-year-olds; it’s true for thirty-one-year-olds. You are in charge of you. You are in charge of your emotions, your thoughts, your reactions and your decisions. It’s the law of personal responsibility, because everyone is responsible for leading something, even if that something is just you.

To put this in the form of an Old English question, “Of what should you take charge?” Great question. For starters, the answer is you. You should take charge of you.

Too often, I hear younger leaders in our organization say, “I’m just so frustrated because I can’t find anyone to pour into me.” This drives me bananas. I’d rather have my head sewn to the carpet than hear someone complain, “I can’t find someone to pour into me.” If you’re not being led well, don’t pass the buck. Maybe, just maybe, the reason you’re not being led well is that you’re not leading yourself well. Before you go and blame your manager, try applying the wisdom of the King of Pop: “I’m starting with the man in the mirror. I’m asking him to change his ways.” Personally, I can’t read those lyrics without singing in my head.

From Outreach Magazine  Forgiving the Unforgivable

The point is that your greatest responsibility as a leader is to lead yourself. MJ didn’t have everything right, but I think he had this right. If you want to see change, begin with the person in the mirror.

One of my least favorite conversations in the church revolves around the concept of “going deeper.” Every few months, someone approaches me in the lobby after one of our services. They begin by telling me that I look like I’ve lost weight. I try not to spill the sarcasm everywhere, so I respond, “Well, thank you, but no, I have not. Now, you seem to have a complaint. What concerns you?”

That’s when they drop the bomb. “Clay, I just … I just don’t feel like we’re going deep enough.” Hmmm. Are we at scuba class or are we at church? I’m a bit confused. Have you ever heard that before? “We’re not going deep enough.” The correct response in this situation is a Christian moo. “Hmmmmm. Tell me more.”

I try to have them clarify what they mean. Typically, I’ll ask, “What do you mean by ‘going deep’?” And they say, “Well, I wish we could do a deep dive through the Old Testament.”

So then I go, “Okay, that’s fantastic. I’ve spent a lot of years in seminary, so if you want to do a deep dive through the Old Testament, we could do that. Let me ask you a question first, though. Have you started reading the Old Testament for yourself?”

They always seem to be offended when I ask this, with a look that says, “What does that have to do with anything?”

Well, what does that have to do with anything? Great question. That has everything to do with anything. Why? Because if you lack the drive to start reading the Old Testament yourself, how in the world do you expect someone else to take you on a deep dive through it? Before others can lead you, you must learn to lead yourself. You need to own your desires and ambitions; no one can lead you any farther than you’re leading yourself. Have you experienced the frustration of trying to lead someone who is not leading him or herself well? A teenager, perhaps? It’s maddening. As the adage says, “I would much rather steer racehorses than carry racehorses.”

From Outreach Magazine  The Centrality of Your Heart

It’s easy to blame someone for not leading you well. Resist that urge, own your ambition, and begin to lead yourself.

I’ve come close to having this quote by Tom Watson, former IBM CEO, tattooed on my body (Though that would be super weird, I’m sure.): “Nothing so conclusively proves a man’s ability to lead others as what he does on a day-to-day basis to lead himself.”

We live in a time where anyone, at any age, from anywhere in the world, can become famous. Have you noticed that? It’s kind of amazing. I love it and hate it at the same time. From “eyebrows on fleek” to Antoine Dodson of “Hide ya kids” fame or the guy who won a talent show by flipping a water bottle a single revolution and landing it perfectly on a table, instant fame always feels like it is right around the corner. Any one of us is just one post away from going viral and landing ourselves on the “Weekend Update” on Saturday Night Live. That’s pretty cool. And pretty scary.

One thing that is not going viral is what you’re doing to lead yourself. I say this because it’s not sexy. It’s not newsworthy. It might not even be noteworthy, but it’s definitely worthwhile. It’s the discipline of the little things. Every time you’re on time, every time you tell someone you’re going to email a file and you follow through, every time you read something for your betterment, every time you finish a workout or a class, every single time you say no to the impulse buy at Costco, you’re exercising something that will never go viral but is incredibly significant.

Jesus was making a statement about stewardship when he said, “Whoever can be trusted with very little can also be trusted with much” (Luke 16:10), but implicit in what he’s saying is that there’s so much more at stake in how you’re leading yourself than just you leading yourself. With the small choices you make when no one else is looking, when it’s just you and God, you are proving or disproving to him (and to yourself) your future ability to lead others. When a younger leader tells me he is frustrated at not having a voice yet or not having influence yet, the answer I give him is to continue to be faithful in leading himself well. You can never go wrong by making that decision.