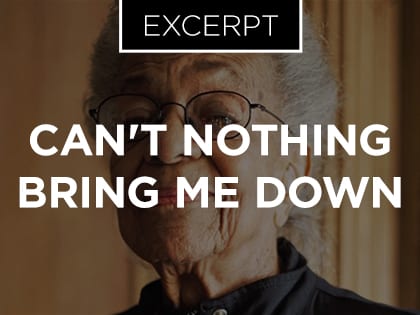 Like Job, tragedy in my life laid the foundation for a deeper relationship with God and understanding of myself.

Excerpted from
Can’t Nothing Bring Me Down
By Ida Keeling

One of my favorite Bible tales has always been the story of Job. I never understood why that story always moved me so much. Can it be that the Universe pulled me to it because someday I was going to need it?

Scripture states that in one day, Job, one of the wealthiest men of his region (Uz) and father of seven sons and three daughters, heard the following news:

In the space of one day, Job had lost his children and all that made him a wealthy man. One can only imagine the psychological and emotional trauma of losing one’s family and lifetime of work and labor in the space of twenty-four hours. It didn’t help that Job was an older man, and even he knew the dim likelihood of his being able to restore all that he had achieved/acquired over the course of his lifetime.

So began the journey of Job, who tried to make sense of his predicament, because it makes no sense that such calamity could have befallen him when it’s noted that Job “was blameless and upright, one who feared God and turned away from evil” (Job 1:1).

Job was understandably overwhelmed with despair, confusion, anger and rage with the God whom he’d served so faithfully. But he never cursed God nor lost his ultimate belief in God’s goodness.

In the end, Job’s faith made all things knowable and proved to be the source of his ability to endure calamity. Such was and is the case with me. My faith in the ultimate justice, grace and mercy of the God of the universe was about to give me a rung to cling to in my most desperate moment of trial, and my deep faith was about to propel me through tragedy into a deeper relationship with my God.

From Outreach Magazine  Recapturing the Wonder

If my sons wouldn’t have been murdered, I would have followed the retirement plan that I had been dreaming of for years. First, I was going to travel and get to know the grandchildren of my siblings in a way that I could not do with a hectic work schedule. Just as my daughters were no longer really close, the same thing had happened between me and my own brothers and sisters. They all had their own husbands, wives, children and grandchildren. It made sense that they were busy with their immediate families and we were not so close with each other anymore. My sisters and brothers had developed new ways of being and doing things once they became part of other families.

For example, my older sister had allowed her daughter to grow up with few rules or restraints. She wasn’t a bad kid at all. I just wondered why Omena didn’t stick with the program that Mama and Daddy had started.

That program was rigid but it worked. Go to church. Obey your parents. Work as many jobs as you can as early as you can. Don’t talk back. Obey the law and the rules of whatever institution that you find yourself in. Never lie, and slacking was not to be tolerated. When I say it worked, I mean that we all turned out to be decent, law abiding citizens who didn’t violate the rights of our fellow man, didn’t go to jail, never accepted charity if we could help it and raised kids just like us. Why change a winning strategy?

One time, many years ago, Omena and her husband were having a problem. Two of my younger sisters had the audacity to pack her and up bring her to my door where I was living in the St. Nicholas housing project. I didn’t have a spare room, but since Omena had a daughter and I had two daughters, there were no sensitive gender issues to consider. So the girls shared one of the beds, my sister slept on the sofa in the living room and I still had my own room.

Let’s just say that when they came to live with me, they brought bad habits with them.

For example, my girls were accustomed to going to bed at nine o’clock. Omena’s daughter stayed up until all hours. Her daughter sometimes came home from school, and instead of immediately doing her homework, she knocked on the door and asked, “Is my mother here?” before she decided whether to come in or go outside and play. It was a game the child was playing. She knew very well that her mother was at work and that her mother knew our household schedule and habits. Sometimes, it would be the middle of the night before that girl started laying out her clothes and getting ready for the next day. I could not let Laura and Cheryl start trying to behave that way.

Omena and her daughter had to go.

From Outreach Magazine  Research: The Shifting Views of Americans on Meaning and Purpose

The problem was that Omena wanted me to let the housing authority know that she and her daughter were staying with me so that she could get on the waiting list for an apartment in the St. Nicholas Houses.

I told her, “Your name can stay here until you get your problem solved, but you have to find another place to actually stay.”

So, she went and found a room for herself and her child until she got a call from the projects that a one-bedroom apartment had been found for them.

That is how my sister and I both ended up living in the St. Nicholas Houses. Because she lived nearby, we often talked about how spread out the family had become. We had siblings in Atlanta, Virginia, St. Croix, and lots of other places. I sadly thought how easy it would be for all our adult children to lose touch with each other and with their second and third cousins. When I retired, I was going to visit every single home and stay for a few weeks until I understood and celebrated who we had become. In other words, who their children and grandchildren were aside from the pictures that I received on holidays.

I also wanted to spend some time with my sisters and brothers reminiscing about our early years. Yes, we were poor, but we had such good times together when we were children. I wanted to talk about Mama and Daddy. Did they have memories that I didn’t have? Of course. Each one of us had our own relationship with Mama and Daddy. Each one of us had our own interpretations of everything that had happened and not happened when we were growing up. I wanted to hear those stories.

Another dream of mine was to learn everything I could about black history both here in America as well as in the Caribbean. Ever since the days of hearing Marcus Garvey preach on the streets of Harlem, I had been interested in black empowerment. Now I had the time to visit the library and bookstores to quench my thirst for information about black people. Being without our identity is no excuse for being without our history. Plenty of very good writers of all nationalities had explored our past and I wanted to read their books. I also planned to become a regular at the Schomburg library, which was located at 135th Street and Lenox Avenue in Manhattan and devoted to black culture. I also remembered the many times I had passed the Black Liberation Bookstore on 131st Street and Lenox Avenue, wishing that I had time to read books by the armful. It is not enough to think of black history one month of every year. All Americans should think about it as a matter of course.