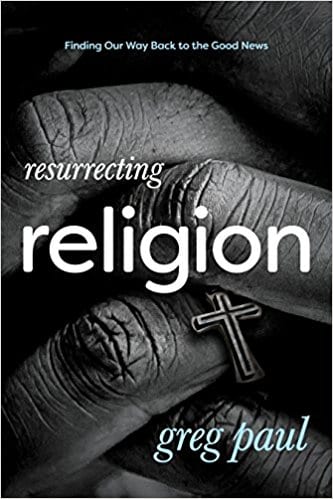 Greg Paul: Finding Our Way Back to the Good News

Resurrecting Religion
Finding Our Way Back to the Good News
(NavPress, 2018)

WHO: Greg Paul, a member and founding pastor of Sanctuary Toronto.

HE SAYS: “Believing in Jesus for my own salvation, and stopping there, is a profoundly ungrateful way to live, given what it cost God, and it’s hardly a life of faith at all.”

THE BIG IDEA: Using the book of James as a guide, this book shows that just because some people practice their faith in extremes, that’s not a good enough reason to abandon religion. Instead we need true religion: living out―publicly and communally―what we say we believe privately and individually. And that means reaching out to the poor and needy.

THE PROGRESSION: The author blends together real-life stories of those who have been overlooked and dismissed with Jesus’ call to look after the needy, the poor, the widow, the orphan.
Each chapter speaks urgently about the need to reclaim our religious identity and heritage, while also doing what Jesus and the prophets did: rejecting all bad religion.
Paul exposes the faulty beliefs so many Christians cling to out of naivety and perhaps fear before offering a better way to meet the needs of those individuals God brings across their path.

“We members of the body of Christ are bones ligamented together, enfleshed with sinew, muscle, and skin; and our lungs are filled with the very breath of God for this purpose. Our individual, private faith compels us to do this work publicly and together.”

A CONVERSATION WITH GREG PAUL

What would you say to pastors who are feeling burned out speaking God’s truth but being labeled “intolerant”?

Somebody has said that preaching ought to “comfort the afflicted and afflict the comforted.” That’s both an important balance and an important focus: We should expect that our preaching will ruffle some feathers now and then. But Jesus also said that his teaching was for the purpose of fulfilling his joy in us, so I think we should also expect, when we are rooted in his call for us, that it will be a joyful thing. Maybe if we’re getting a lot of blowback we’re not speaking joyfully; maybe we’re speaking out of self-righteousness, anger or frustration—and people sense that. And maybe we’re too worried about how we’re being labeled. Historically, prophets (if we dare to that office) weren’t generally regarded or treated well. Burnout usually happens when we spend more energy trying to fix (or comply with) others rather than in deepening our own relationship with God.

How can church leaders encourage their congregation to see church in a new light?

First, we must act. Leaders go out ahead of followers. If church leaders spend more time shoving from behind—instructing others and trying to “mobilize” the church—than they do actually going where Jesus went and doing what Jesus did, they’ll get nowhere. Model what needs to be done; make it your own lifestyle. Second, teach the teaching of Jesus. Teach often and comprehensively about the justice of the kingdom of God, which Jesus announced, the Law encoded, the prophets proclaimed and the disciples lived. And don’t stop acting it out.

How is it possible to dig in deeper with each other about religion and faith in such a combative culture?

From Outreach Magazine  All Effective Pastors Share This Leadership Attribute

Jesus’ great commandment was to love one another, and John develops the connection between loving God and loving each other in his first epistle. It sounds a little trite, but choosing to love is really the only means we have of attaining unity with anyone. We’ll certainly never reach unity by arguing others into agreement with us.

In this context, loving means seeking the good of the one you’re trying to love. Even in the midst of disagreement, what we have to say to each other lands quite differently if loving matters more to us than being right. Jesus didn’t command us to be right, but you’d never know that from the behavior of a lot of his followers. Christians in the public square don’t have a great reputation for humility, and yet our Lord didn’t think equality with God was something he should hang on to. We could use a little of that attitude and the self-sacrifice it prompts. People might listen more if they sensed it was a conversation, rather than us telling them stuff, and if they could see that it cost us something.

Training a Worship Volunteer to Be a Worship Leader