Home Resources Books Why Is ‘Sin’ the Key to Grace? 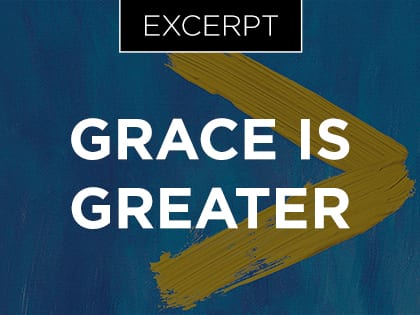 Many people have trouble with a God that holds us to a standard of righteousness, but we don’t even meet our own standard.

Excerpted from
Grace Is Greater
By Kyle Idleman

MORE FORGIVING THAN YOUR GUILT

Our ability to appreciate grace is in direct correlation to the degree to which we acknowledge our need for it. The more I recognize the ugliness of my sin, the more I can appreciate the beauty of God’s grace. The Bible holds up a mirror and confronts us with the reality of our sin.

“Everyone has sinned; we all fall short of God’s glorious standard” (Rom. 3:23).

So who does “everyone” include? Well, everyone includes you and everyone includes me. We have all sinned. I’m sure you’ve heard that before. I doubt it’s new information. My question is, how do you respond to that information? For a long time I would read verses like that and think to myself, Well, yeah. I mean, technically, I’ve sinned. But I haven’t sin sinned.

Here’s the way it usually gets worded to me: “I’m not that bad.”

My wife and I were eating dinner together at a restaurant when a woman, probably in her late fifties, came over and introduced herself. She began to tell her story of how she had recently become a Christian. Except she didn’t say “Christian,” she said “follower of Jesus.” She pointed out her husband seated at a table across the restaurant. I think she felt like she needed to address why he didn’t come with her to say hello. She explained he wasn’t upset about her decision but seemed annoyed by it and didn’t understand. I smiled and waved at him. He waved but didn’t smile. His wave was like the wave you give the other driver at a four-way stop when you tell them to go ahead even though you think you have the right-of-way. That kind of wave. I went over and introduced myself, and we chatted for a minute or two.

The next day I followed up with an email to both of them saying it was good to meet them and to let me know if either of them had any questions I could help with. I didn’t hear anything back for a couple of months. And then one day I was sitting at my desk when I got an email from the husband. He told me about the changes he had seen in his wife. She was kinder and more patient. She seemed more joyful. But instead of being excited about these changes, he was skeptical. Here’s a line from his email: “She seems much happier now, but I think she’s just trying to get me to drink the Kool Aid.” I knew that this wasn’t a rhetorical email. He was reaching out but didn’t want to say it. I emailed him back and asked if he would come to church with his wife and visit with me for a few minutes after a service.

From Outreach Magazine  The Power of the Small Things

We sat in a small room, and I began to tell him the Good News of the gospel. I began with Romans 3:23 and made the point that everyone has sinned and fallen short of God’s standard. Immediately he became defensive and said, “I’m not that bad. Most people would consider me a good man.” He thought it unfair to be called a sinner and be judged by “God’s standard.”

“How fair is it to set a standard that no one can meet and then say everyone is a sinner?” he continued. “It’s like setting up a target that’s out of range and then blaming the shooter for not being able to hit it.”

I started my attempt at a theological explanation of why we were sinners. I was going to begin with Adam and Eve in the Garden of Eden and talk about how sin entered the world. I think he would have been impressed with some of the terms I was going to use to explain how we have rebelled against God. But before I had a chance to talk about imputation or ancestral sin, his wife interrupted me and asked if she could say something.

From Outreach Magazine  Christine Caine: What Keeps You Anchored?

I had never thought of it that way. We may get defensive when a preacher calls us a sinner—but forget about God’s standard, we can’t even meet our own standard. We work hard at convincing ourselves and others we’re not that bad, but the truth is we are worse than we ever imagined. The more you push back on that, the more you push back on experiencing God’s grace. If we miss the reality and the depth of our sin, we miss out on the grace of God.

Adapted from Grace Is Greater by Kyle Idleman, copyright © 2017. Used by permission of Baker Books, a division of Baker Publishing Group. All rights reserved.