Home Resources Books How Then Should We Live? 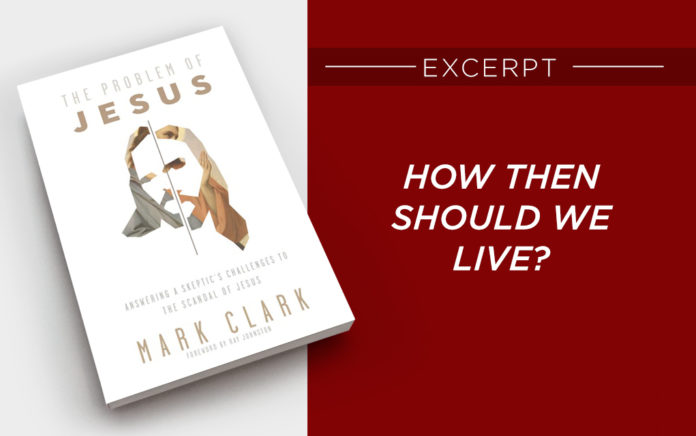 Excerpted from ‘The Problem of Jesus’ (Zondervan)

Excerpted From
The Problem of Jesus
By Mark Clark

It’s the question philosophers have asked for centuries: “How then shall we live?” Every worldview attempts to answer this question, and one of the problems of postmodern philosophy is that it mocks attempts to find a sense of meaning in life. “People seek the meaning of history,” the Russian existentialist Lev Shestov (1866–1938), said. “But why must history have meaning? The question is never raised. … And yet if someone raised it, he would begin, perhaps, by doubting that history has a meaning, then continue by becoming convinced that history is not at all called to have a meaning, that history is one thing and meaning another.”

Jesus would say that living without meaning is destructive to the human spirit. And we have seen this devastation play out in recent atheistic regimes, with 60 million dead in China, 6 million dead in Europe and 20 million dead in Russia—all driven by secular narratives that empty history of morality and meaning. By contrast, Jesus tells us that history—and human life—has infinite worth and meaning. What you do with your life means everything! If we’re honest, though, believing something different than your neighbor about the divinity of Christ doesn’t cost you much if it doesn’t filter down to a way of being in the world. A version of Christianity characterized by mere beliefs rarely translates to a different quality of life. You can assent to the fact that Jesus is God and that he forgave you for your sins on the cross. But now what? You spend your money and time no differently than the non-Jesus-believing world around you. You’re busy scrolling Instagram while Netflix plays in the background, waiting to cart your kids to yet another soccer game. Jesus addresses us in this moment, reminding us that while there exists a set of beliefs Christians hold and believe, they have a purpose. They are onto something, namely, a radical life change. Your life must look different. Anything else isn’t real Christianity.

When I was a kid, I attended Christian summer camp, and during one summer at camp, I met a girl named Rebecca who had “given her life to Jesus.” A few years later, I ran into her again and found out her life was a moral mess. She was sleeping around with different guys and getting hammered every weekend. In other words, nothing about her life had changed from that time at camp. At the time, I was an outsider to Christianity, so I asked her, “Aren’t you a Christian?” “I am!” she responded, laughing. She thought for a moment more, and then added, “I prayed that prayer at camp, and they told me that’s all I had to do.”

From Outreach Magazine  How to Structure Your Church to Grow

I remember those words surprising me, even though I wasn’t a follower of Jesus. All you had to do?

A couple of years later, shortly after I myself became a Christian, I was in a car with a friend. He had grown up going to a Christian church, but he wasn’t living a life that reflected that upbringing. We were driving along, and as we went through an intersection, a car ran a red light. I swerved out of the way and into oncoming traffic, narrowly avoiding falling into a ditch and barely missing a head-on collision. We pulled over to the side of the road to catch our breath, aware that things could have been much worse.

As we drove home, I asked him, “So what if we had died? I mean, you grew up as a Christian, but it’s not translating into your life. What do you do with that?” He looked at me and nonchalantly remarked, “I said a prayer as a kid at church this one time, and that’s all they told me I had to do.” There it was again: all they told me I had to do. Both of these friends had been taught, either consciously or unconsciously, that to be a follower of Jesus, you simply needed to believe something different than those around you. If you did this, you were “going to heaven” when you died. In other words, check the box, do the bare minimum, step over the lowest bar possible, and somehow you will be rewarded with great gain.

By contrast, Jesus’ call to discipleship is costly. It is a reprioritization of everything: your relationships, your money, the way you do your job, the way you relate to your spouse, your kids, and your neighbors. You can‘t compartmentalize Jesus and his demands from the rest of your life. You can’t say Jesus is good for “salvation,” as your ticket to heaven, and everything else is in another drawer. Yet this way of living is very popular in the modern Western world. People can be a Christianized version of what they already are—without change, cost, or transformation. This is the opposite of biblical Christianity.

From Outreach Magazine  What You Need to Know About TikTok

And this is precisely why Christianity—the biblical call to follow Jesus—wasn’t for everybody. Jesus met a rich young ruler who couldn’t walk away from his wealth, so he walked away from Jesus. The crowds walked away when Jesus told them to eat his flesh and drink his blood. The older brother in one of Jesus’ parables wouldn’t go into the party to celebrate the radical grace the Father had extended to his prodigal brother. Over and over again we see a consistent theme: people reject Jesus and his ways. Not accepting Jesus was the norm—and still is today. The default setting of the human heart is a rejection of Jesus’ authority over our lives. And his proposed remedy to this rejection: Deny yourself. Pick up your cross. Follow me. Never have there been three more radical—yet life-giving—invitations set before humankind.