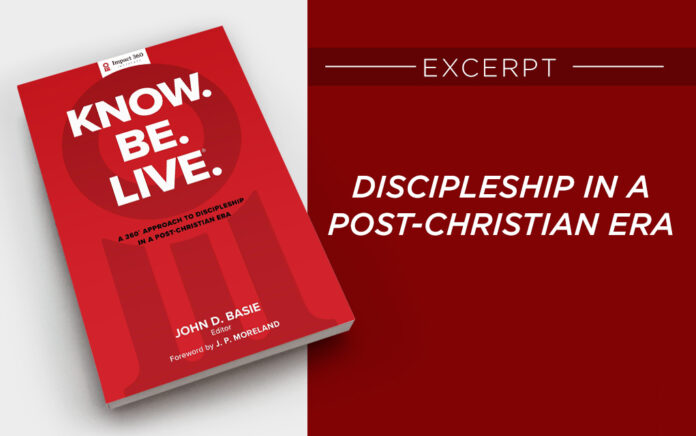 Where we are going is toward the image of Christ

The idea that we are created in the image of God is introduced in the earliest chapters of Genesis. Genesis 1:27 says simply, “God created humankind in his own image, in the image of God he created them; male and female he created them.” Some of what is going on here, as argued by many Old Testament scholars, relates to the actions of rulers in the ancient Near East. It was common for rulers to set up images of themselves in far off lands to represent their rule—to stand in for them and point to them. That is part of what God communicates here about humans, the high point of God’s creation, given a gift and a task by God. We see later that being created in the image of God serves as a reason for the significance of human beings. For instance, in Genesis 9:6, the death penalty for murder is based on the fact of the victim of  murder being created in God’s image.

Christians have circled around three main ways of explaining just what this image of God in humanity is. We’ll look at them briefly, in no particular order. First, the substantial or substantive view holds that there is some unique quality that humans possess, such as moral freedom or intellectual abilities or the human will. To be in the image of God, then, is to be able to think, to be moral, or to exercise a will. Second, the relational view sees the image of God as the ability and need to establish and maintain relationships. According to this view, to be in God’s image is to be in relationship with God and with others, just as God is a relational Trinity, always in relationship as the Father, the Son and the Holy Spirit. Third, the functional view of the image of God centers on the idea that the image is more about a task or role humans are given by God. The image is seen in what humans do.

Problems emerge when we seek to isolate one of these. If we only emphasize the substantive view, we might think of some humans as more human than others, simply because they more clearly demonstrate the particular quality, such as intellect. The relational view on its own cannot adequately distinguish humans from other creatures because other creatures exist in degrees of relationship and dependence as well. The functional view seems incomplete when focused only on what humans do because it relies on certain qualities, as in the substantive view, in order to carry out particular tasks.

Fortunately, we do not have to pick only one of these three perspectives. In fact, we can connect them in a way that balances some of the tensions we have observed in our cultural answers about identity. The substantive aspect of the image of God reminds us that God has created human beings with unique capabilities and qualities that define us as human beings. While some display these to a greater degree than others, we do not earn our humanity by demonstrating them. The relational view reminds us that we cannot think of ourselves independently; to be a person is to be in relationship. The functional view reminds us that we are not left on our own to determine our direction. Rather, when God created humans, he gave us a task and the capabilities and relational qualities needed to accomplish it, by his grace.

Did you catch how these views help cut through the current tension? We noted before that modern culture pulls us in two directions: pick who you want to be, whatever that might be, and look deep inside to find who you really are. We see with the image of God, that God has created us as humans with certain qualities and abilities, things that define who we are as humans. He has put us in relationships that bind us in and limit us and define us. He has also given Christians a task to do—to steward his creation and to work as members of the body of Christ. These truths help balance the ways in which we seek to live into the unique human beings God has called us each to be, while rooting ourselves deeply in God’s creation and call.

Reflecting on the image of God helps us in another way too. Theologians have explained that the image of God is not something we can lose. It was marred by the fall into sin, and we fail to be faithful to God’s image when we choose to sin, but we don’t lose God’s image. To be human is to be in the image of God. Similarly, humans who suffer with disability, pain, illness and injury do not become less human because of these problems.

If we cannot lose the image of God because of disability, we also cannot create it on our own—nor do we need to. It is given to all by God. We receive. Further, just as disability does not diminish the image, no form of human enhancement can increase that image. If the image of God was only about our intellect, then we might think someone with a brain-computer interface that increases intelligence is more in the image of God. But we can’t enhance God’s image by increasing capabilities. The only path to true identity is through receiving our identities as given by God, redeemed by Christ, and sanctified by the Holy Spirit.

Now, there are all sorts of modern advances that can help overcome evil and pain and suffering, and we should embrace them as signs of God’s grace and coming kingdom. Christians do not need to be against biomedical advancements that save lives and alleviate suffering or improvements in consumer technology that make it possible to communicate meaningfully with family and friends who are far away. But we can’t use these things to make humanity, or remake humanity, in aggregate or in the mirror. That’s not where those things fit theologically. We don’t make humans; we don’t make ourselves more human; and we don’t create who we are.

Where We Are Going

As noted, the only path to true identity is through accepting our identities as given by God, redeemed by Christ, and sanctified by the Holy Spirit. In other words, where we are going is toward the image of Christ. God has decided that his people will be made into the image of his Son (see Rom. 8:29). That means, when we wonder what we should look like in the future, the dominant image should be that of the Firstborn Son, Jesus Christ. We should not imagine a self that is constructed upon our own desires, goals, and preferences, but one formed into the image of Jesus. Later we’ll talk about the balance between the created aspects of our identity and the transformational, Christ-constructed aspects of our identity.

Excerpted from Know. Be. Live. By John Basie. Published by Forefront Books. Copyright 2021. Used by permission.