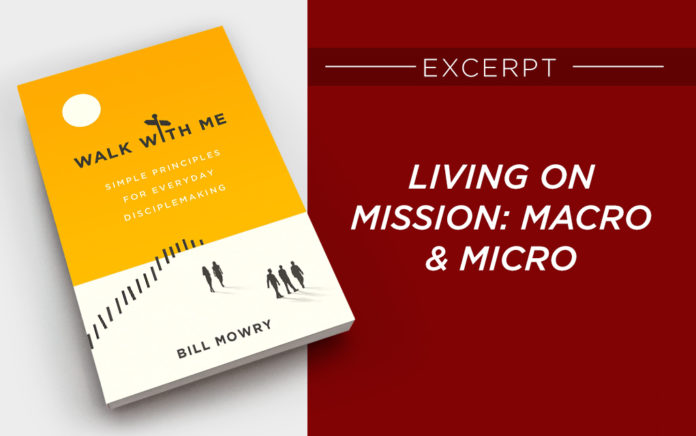 Excerpted from ‘Walk With Me’ (Moody Publishers)

Excerpted From
Walk With Me
By Bill Mowry

Cindy began her career in an insurance company call center. She was the first voice you heard when filing an auto accident claim. As in many call centers, she had a set number of minutes per person and a quota of calls to get through per hour.

“I couldn’t keep to the script,” she told me. “People have just experienced a traumatic incident and they need someone to talk to. Elderly people are particularly shaken up. They’re often on the phone in years wondering what to do. These conversations can’t fit into a neat three-minute phone call. I decided to toss out the script and listen. This seemed to be the ‘Christian thing’ to do.”

Was Cindy living on mission? You bet she was. Cindy was living out God’s macro mission. I think of Jesus’ words in the Sermon on the Mount: “You are the light of the world. A city set on a hill cannot be hidden” (Matt. 5:14). We’re called to be light to dark places. Light always pushes back the darkness. How was Cindy bringing light to a dark place? What makes an insurance company a “dark” place?

So Cindy brought God’s kingdom to work. She helped people taste God’s kingdom by living out His values in a giant corporation. What values motivated her? She treated people with respect. She listened and cared. She compassionately processed claims. She worked under the reign of kingdom values.

Cindy was committed to macro mission, influencing the culture around her in kingdom ways. She did this in a micro way, one telephone conversation at a time with each customer who needed her help.

The “garden” passages in Genesis 1–3 tell us that we’re created in the “image of God.” Living as lights means radiating this image into a dark world. Being an image-bearer is more than a theological statement—it’s a vocation. Author and historian N.T. Wright states: “It means being called to reflect into the world the creative and redemptive love of God.” This is macro mission at its best.

Living as an image bearer reminds us how ancient rulers would place statues of themselves in distant countries to remind the subject people who was ruling them. In the same way, “God has placed his own image, human beings, into his world, so that the world can see who its ruler is.”

From Outreach Magazine  A Magnificent Journey Into the Heart of God

You and I are those image-bearers. Into the adult routines of workplace, neighborhoods, or hobbies, God has placed his image (us!), showing what it means to be citizens of a new kingdom. “God’s kingdom, inaugurated through Jesus, is all about restoring creation the way it was meant to be,” and He does this “through loyal human beings,” people who bear his image, people who live on mission, people who are his disciples.

Cindy was serving people at her workplace by being concerned, compassionate, and helpful. People were helped and their spirits were nourished after a phone call with her. This is macro mission in ordinary places. She was bringing in the “big picture” of God’s kingdom values to an everyday setting. She was restoring a workplace to the way God intended it.

Macro mission is what author Gabe Lyons describes as those who “see themselves on a mission, partnering with God to breathe justice and mercy and peace and compassion and generosity into the world.” In The New Parish, the authors describe mission as: “bearing witness to the love of Jesus and the reign of God. It is joining the Spirit’s movement in the neighborhood and seeking the reconciliation and renewal of all things.”

“For in him all the fullness of God was pleased to dwell, and through him to reconcile to himself all things, whether on earth or in heaven, making peace by the blood of his cross.”

The gospel now becomes a big message; a message offering more than an “escape from hell” card. In describing the gospel of our first- and second-century church leaders, historian Michael Green writes:

“Their gospel was big enough to embrace earth and heaven, this life and the next. They were concerned with labour relations, slavery, marriage and the family, the exposure of children, cruelty in the amphitheatre and obscenity on stage. … There was no dichotomy between a social and a spiritual gospel to those who held a unitive concept of truth.”

What difference does this make in an adult’s life routine? Let me tell the story of Devin.

Devin was a friend from church whom I invited to read the Bible with me. As we met, read the Bible, and talked, the conversation would frequently turn to his job. As an adult he spent 40-plus hours a week as a public school teacher and a supervisor of teachers. We talked about what it means to push back the darkness and bring in the light in the classroom.

“Do you have a vision for extending the kingdom at your job?” I asked. We then brainstormed on what values he would like to bring into his school, trusting God to build kingdom values into his school’s culture. He gave me permission to share his vision statement:

“God willing, I will give teachers the freedom to do their jobs well while alleviating frustrations by developing relationships and integrating integrity, compassion, servanthood, and worth of individuals into my daily tasks.”

In a public school, Devin is pushing back the darkness and bringing in the light of God’s values. He listens to the teachers he supervises, discerning their needs. He is their advocate, securing the resources necessary for success. He represents his students to the administration, knowing that the students are the reason for the school. He is living on mission—the macro mission of bringing God’s values into his workplace. Wouldn’t you want Devin to be your supervisor?

Bringing light to dark places means wearing bifocal glasses. One lens is macro mission while the other is micro mission. When I invite people to walk with me on mission, I’m inviting them to both a macro and a micro way of living. Both lenses are important to see through. We can’t have one without the other. We keep them in tension just as the Bible keeps them in tension. God is redeeming the cosmos while at the same time sending us to share His mercies with those in our worlds. Macro and micro go together.

How did Cindy’s work review go? She had some of the highest customer evaluations in her group. Cindy ended up getting a promotion.

Order ‘Walk With Me’ from Amazon.com »

Excerpted from Walk With Me: Simple Principles for Everyday Disciplemaking by Bill Mowry (© 2021). Published by Moody Publishers. Used by permission.