Home Resources Books The Wisdom of Loving God and His World 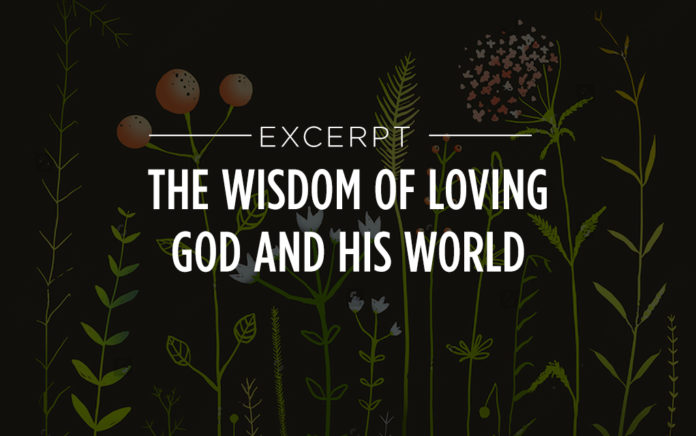 We serve a God who is making all things new.

For a long, long time, I moved in Christian circles where young people were coached into adulthood with motivational victory-speak that called on them to do Big Things for God. In fact, I probably used this language with an impressionable young person or two, but I’m done telling young people they’re destined to turn the world upside down for Jesus. Have I gone lukewarm?

I don’t think so. I’ve had too many heartbreaking conversations with young adult friends who eagerly responded to the ambitious “change the world” call, gave themselves over to ministry, missions or social entrepreneurship, and then burned out after a few years in the trenches.

On the one hand, these young adults are going through coming-of-age transitions that are completely normal. But many of these crises stem from a conception of spiritual success in the church that elevates full-time Christian service and promises in so many ways that “You’ll find God, save the world, and as a bonus, maybe even get some well-deserved recognition.”

Young, earnest Christians in their late teens and early twenties are especially vulnerable to world changer talk as they begin to sift through vocational decisions and make choices about how to build their lives. These years are usually fueled by the ambitions and idealism that characterize Stages 2 and 3 faith, but they’re a highly combustible kind of fuel. If we ignite that fuel with a one-size-fits-all, overzealous version of the Great Commission to “go into all the world,” we may be lighting a rocket under young adults that launches them up, up, up with nowhere to go but down. It’s painful to watch a young adult crash-land.

I’ve noticed that these triumphalist, world changer calls are rarely aimed at those of us in midlife and beyond. If we’re maturing, ambition mellows into a search for meaning and a desire to create legacy. Even when we make dramatic life changes in our second act and move from an ambition-driven career path toward a creative or service-oriented vocation, have you noticed that the way we talk about these transitions bears little resemblance to the way we coach younger people to get out there and turn the world upside down?

Author Tish Harrison Warren notes, “Maybe, at the end of days, a hurried prayer for an enemy, a passing kindness to a neighbor, or budget planning on a boring Thursday will be the revolution stories of God making all things new.”

God’s promise of restoration to his renegade people enfolds all who belong to him: “See, I am doing a new thing! Now it springs up; do you not perceive it? I am making a way in the wilderness and streams in the wasteland” (Isa. 43:19). He emphasizes our present tense need for re-creation throughout Scripture up until the final movement of time in this world. “He who was seated on the throne said, ‘I am making everything new!’” (Rev. 21:5).

This promise of a way in the wilderness and streams in the wasteland takes on new meaning for those of us who find our first-half-of-life ambitions have led us into the desert-like darkness that can sometimes characterize faith. That darkness can rightsize and redirect our ambitions and help us recognize the value of living fully the life God has given us.

Mother Teresa, who spent her life serving the poorest of the poor, is often cited as the source for these powerful words: “We cannot all do great things. But we can do small things with great love.”

Those words reflect the ministry God has given to each of his followers, no matter what our gifting, church affiliation, economic status or vocation. It is the calling to what the Jewish people call tikkun olam, or “repairing the world.” Repair means anything done to make the world a better place, from cleaning up garbage on a beach to tending the wounds of a dying AIDS patient in a Calcutta slum, as Mother Teresa did. Or it can be as small as positioning yourself at your window to wave at children walking to school each day, as 88-year-old Tinney Davidson did for 12 years straight.

Lest you think this is just another way of saying “good works,” we as followers of Jesus recognize that an essential way in which we participate in repairing the world is by sharing the good news of the risen Christ with those around us. That said, much of my early Christian experience was spent in church communities that focused on encouraging others to make the most important decision of their lives—praying to receive Christ as Savior and Lord. The goal was to rescue as many as possible from a godless eternity spent in hell. I learned to define myself as a follower of Jesus in terms of how effective I could be in communicating the importance of this decision to those around me. I believed that any efforts spent on this sin-sick world weren’t quite as important as emphasizing life in the world to come.

Jesus never spoke or acted as if he prioritized heaven over this world. He healed, delivered and forgave throughout his ministry so that those he’d touched would be free to serve God in this world.