Home Resources Books The Kingdom of God Is a Neighborhood 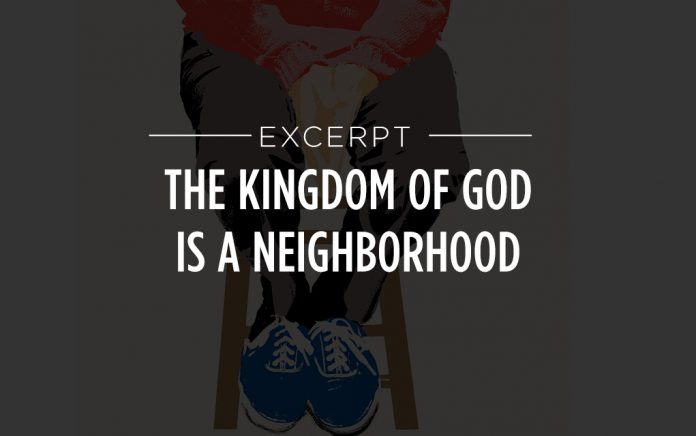 Mister Rogers was being very strategic when he called his viewers “neighbors.”

Excerpted From
Exactly as You Are
By Shea Tuttle

Fred Rogers found his own faith, at times, a little uncomfortable to talk about. “I think it’s really tough—for some people, it’s very easy to talk about spiritual things, and I get really turned off by those who can be so glib about it,” he said.

Fred came from a reticent, practical family, dedicated to faith and service without ever wanting to broadcast either one. He also worried, at times, about the potential impact on his program or his viewers if he talked about his beliefs too openly: “This is all very personal, you know. I have never flaunted my faith. In fact, there were years when I wouldn’t tell people about my ordination because I didn’t want anybody to think that I was using it in any way to further the program in the eyes of certain groups.

“And, I also didn’t want some children to feel excluded.”

Still, Fred knew that his faith infused his work. “I think that my faith has affected everything that I’ve done,” he said, “but that’s only natural; so have my genes.” Whether he was vocal about it or not, faith was as fundamental to Fred as DNA.

To bridge the gap between his discomfort and caution on the one side and the faith that made him who he was on the other, he relied on story. “What a tough job to try to communicate the gift of Jesus Christ to anybody,” he marveled in a 1979 letter to a friend. “It can’t be simply talked about, can it? Jesus himself used parables—so I guess that’s our directive: Try to show the kingdom of God through stories as much as possible.”

Christians of many stripes find plenty to argue about when it comes to what “the kingdom of God” entails. Most agree that it’s not simply heaven, some other place in some other realm. Rather, it has to do with the establishment of God’s order on earth, both now, in a way that is ongoing and ever-becoming, and in the future, in a more definite, final, full form. “God’s order” looks something like the vision offered by the words of Isaiah that Jesus reads in the temple at the start of his ministry: good news for the poor, release for prisoners, sight for the blind, and liberation for the oppressed. This, Isaiah writes and Jesus reads, is what God’s favor looks like (Luke 4:18–19).

From Outreach Magazine  Why Study Moral Leaders From the Past?

But Jesus had trouble talking about the kingdom of God too. As Fred notes in his letter, Jesus most often tried to explain God’s kingdom through parables, many of which begin, “The kingdom of God is like …” He tries again and again, throughout the Gospels, to find an apt metaphor, even asking aloud, “What is God’s kingdom like? To what can I compare it?” (Luke 13:18; see also Luke 13:20 and Mark 4:30). It’s almost as if each attempt leaves him dissatisfied, and so he tries one more time.

Fred patterned his own storytelling after this example. The Neighborhood of Make-Believe, with its eclectic cast of puppets and people, was the perfect place for Fred to stage his own parables and work out his own theology of the kingdom of God.

It’s almost as if Fred Rogers began the week saying, “The kingdom of God is like …” and filled in the rest with a story. For Fred, if the kingdom of God is a place where swords are beaten into plowshares, then it is a place where bombs are built into bridges, where the wasteful accumulations of fear and power are converted into record players, where children’s needs—once sacrificed to the warring whims of kings—are ultimately met, where even the warring king can be converted through connection.

The kingdom of God, for Fred Rogers, is a neighborhood.

Perhaps the neighborhood, and the idea of neighboring, was Mister Rogers’s most persistent parable—if also his most covert. “Hello, neighbor,” “I’d like you to know my television neighbor,” “It’s a beautiful day in this neighborhood,” “the Neighborhood of Make-Believe”—the “neighbor” language is so omnipresent, it’s easy to miss how theological it is. Mister Rogers, who carefully considered every word he spoke onscreen, didn’t call his viewers “acquaintances” or “friends”; he didn’t call us “boys and girls” or “ladies and gentlemen.”

He called us “neighbors.”

There’s no denying that “neighbor” is biblical language. The Hebrew Bible instructs God’s people to “love your neighbor as yourself” (Lev. 19:18), and in the New Testament, Jesus discusses this commandment with a legal expert who tries to lay a conversational trap for him (Luke 10:25–37). “And who is my neighbor?” the scholar asks slyly. And Jesus answers, as he often did, and as Fred Rogers himself learned to do, with a story. In the story, a man is beaten by thieves and left to die. A priest—a powerful man, both religiously and politically—approaches, sees the injured man, and crosses to the other side of the road to avoid helping. Then another religious leader does the same. Finally, someone else comes down the road, someone of the wrong class or the wrong color, a member of a despised group. Though he is on a journey, he stops. “Moved with compassion,” he tends the injured man, takes him to an inn and pays for his lodging and care.

“What do you think?” Jesus asks his tricky interlocutor after finishing the story. “Which one of these three was a neighbor?”

And though perhaps he can’t believe he is saying so, the scholar answers, “The one who demonstrated mercy toward him.”

When Mister Rogers called his viewers “neighbors,” when he hosted us in his neighborhood for over 30 years, he was playing out his own greatest parable: calling us, gently but firmly, into lives of mercy and care for one another. He knew we wouldn’t always get it right, that we are prone, like the king he lovingly created, to bow to fear and to serve competition, to privilege our own safety and to neglect others’ real needs. Maybe, in calling us neighbors, he knew he was calling us something better than we actually were. But maybe he believed that if he got to us while we were young, if he told us, again and again, that we are good, that we are lovable, and that we can build bridges of mercy, maybe we could grow into real neighbors to one another.